As this post goes up, I am most likely sprawled horizontally in some kind of food related coma, dreading the fact that I’m going to have to do it all again in an hour or so. Will I be playing any games at this point, it’s certainly possible, although the whole family obligation makes that a little difficult. Maybe I should just sneak the Switch with me wherever I go over Christmas.

This game is one I’ve already said a fair bit about in the past couple of months. It’s one I had been looking forward to most of the year for nostalgic reasons, and while my parting feelings with the game weren’t as glowing as they had been in the beginning, I can’t deny the quality of the game itself.

Before I get into it proper, let’s review where we are so far:

I try not to be swayed by nostalgia. It’s not to say I can’t appreciate and celebrate it when it’s done well. But I don’t like to think it blinds me to the shortcomings of a piece of media either. The original three Spyro the Dragon games are very much video games of their time. Collect-a-thon platformers with a bright and likeable cartoon mascot. Spyro just so happened to be one of the most memorable of the PlayStation era.

The Reignited Trilogy is a completely remade collection of Spyro the Dragon, Spyro 2: Ripto’s Rage (Gateway to Glimmer) and Spyro: Year of the Dragon. They’re a trio of games all of which have totally different strengths and weaknesses. None of which have anything to do with how this game looks. 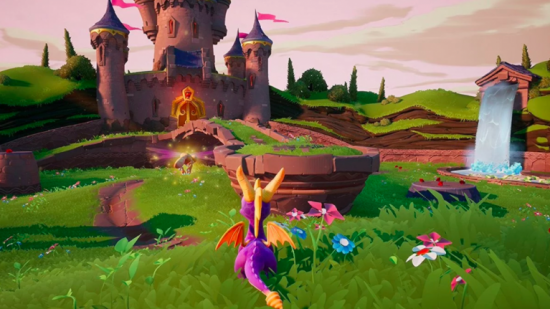 Toy’s for Bob are the developers behind the Crash Bandicoot remakes also and the visual design in this collection is absolutely stunning. The games are vibrant, colourful and simply joyous to run around in. The games are incredibly faithful to the originals too, for better or worse, and the character models, world design and music that have been brought up to date for modern consumers. From a pure visuals standpoint, there are few games I thought looked better than the Reignited Trilogy this year.

Going back and playing these games again for the first time in a long time, it made me appreciate just how good the first Spyro was from a design standpoint. The Dragon worlds seem mystical, like something from a legend made real. The music also helps with this throughout, having chanting, chiming and a very chilled out tone to the whole thing. The only downfall is the game’s utter lack of story, which the other two make up for by the bucket load.

The problem is, while the following games do a lot more in terms of gameplay diversity and more unique seeming worlds, it loses some of the charm and tone that the first game carries so well. While the first game had a very strong identity, the following games felt like an increasing case of simply throwing their mascot into a random assortment of loosely connected world.

I’ll be honest, had I not been such a big fan of the first and second Spyro games as a child, this probably wouldn’t have been on my list. I had no interest in the Crash remakes from last year simply because I don’t hold a candle for that series. And coming to Year of the Dragon for the first time in this remaster, I ended up not really liking it a whole lot. Maybe it was because it was the worst of the three, or maybe it was because I didn’t have the nostalgia for it. I’ll let you interpret that one for yourselves.

But I got so much enjoyment out of those first two, and the impressiveness of these remasters is nothing to sniff at either. Toys for Bob have done a fantastic job. I loved going back and this. And yes, nostalgia plays a large role in that feeling.