When That Crash Bandicoot trilogy came out last year, all I could think was one thing: When Spyro!

Insomniac’s three original Playstation Spyro the Dragon titles were amongst my favourite Playstation games growing up. They were some of the earliest I remember being able to 100%, and so I played them over and over. It was also one of my earliest memories of following a developer, playing the Ratchet and Clank series afterwards because the same people were making it. 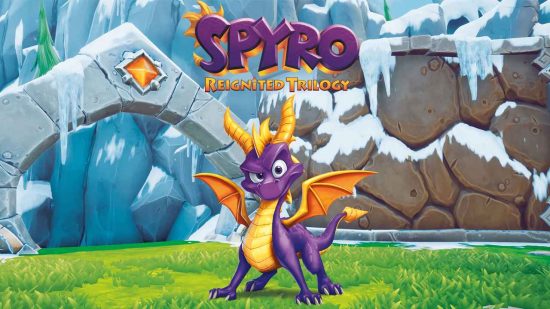 I was really excited to get my hands on these games again, especially two and three, having played the original again not too long ago. Even now, I remember these games being the antithesis to Crash Bandicoot.

Where Crash was unforgivingly brutal in its difficulty, Spyro was a more laid back and relaxing affair. As I play through the trilogy I’ll give my thoughts on each game in turn, starting with the original: Spyro the Dragon.

To say the story behind the original Spyro is bare bones the biggest understatement. The game begins with some dragon’s throwing shade at a frog man called Gnasty Gnorc during a TV interview. This proves to be a very shortsighted move on the Dragon’s part as Gnorc instantly, and effortlessly, turns all of the dragons into crystal statues.

He also turns all of their treasure into minions for him army and steals the Dragon’s eggs. Which is odd considering there aren’t any female dragons in the game. 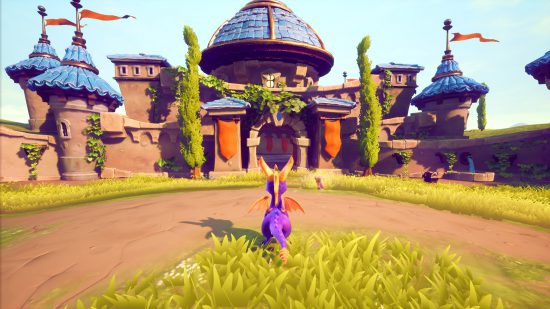 After the first cut scene, all story and interaction comes from the dragons as you release them from their crystalline prisons. In keeping faithful to the original game, none of this dialogue is changed. Although it is revoiced.

As a result the interaction with Spyro’s peers ranges from ill timed gameplay tips, to weak jokes or just a simple thanks for releasing them. It’s charming in how no nonsense the story is, as well as how Insomniac couldn’t be bothered to write unique lines for each and every dragon saved.

Even the ending is abrupt as all hell, cutting hard to black as soon as the final boss is defeated before showing a final cut scene that can’t be any longer than 15 seconds in length. I have to applaud them for leaving that kind of thing as it was, despite the huge graphical jump in this remaster.

Spyro’s actions are pretty basic. He can jump, glide and attack enemies with a head charge and his flame breath. His basic abilities remain unchanged throughout, the only changes coming with stage specific abilities such as a super flame and super charge. 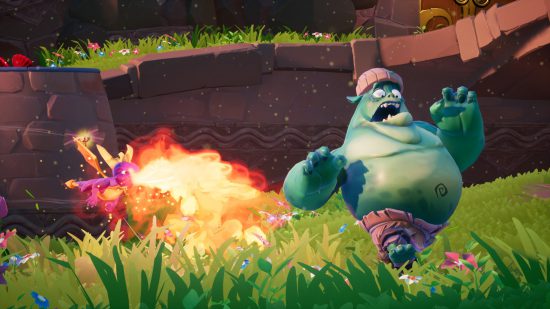 Game is broken up into a hub world, each of which having a number of portals to smaller worlds within. In each of which the player is tasked with traversing the area, collecting treasure, eggs and releasing dragons. Much of the challenge comes from traversing the world and getting to the difficult to reach spots.

The enemies themselves rarely pose a genuine threat and most deaths come as a result of falling from the world. It’s because the camera sometimes feels like it hugs too closely to Spyro which cans make some of the trickier glides more difficult than they need to be when you need to control both he character and the free floating camera simultaneously.

It’s relatively easy to work your way through each world, popping the 100% marker before moving on. The most difficult aspects coming from inch perfect jump timing and the super charge jumping puzzles, which again feel like casualties to the original camera set up.

I never really appreciated the music for Spyro until playing this remaster. There is this mystical, magical feeling to every track. It’s part of the reason the game always had such a relaxing sway over me. Nearly every track is accompanied by the chiming of bells and a slow pace to them. 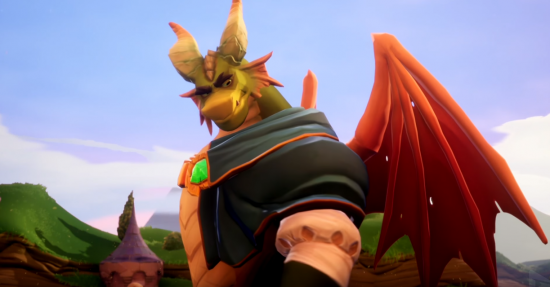 Despite the Sonic the Hedgehog-esque attitude of Spyro himself, that doesn’t permeate the game. Near everything outside of the characters is a lot more chill. It sets a great tone in a world of dragons containing worlds called things such as Dream Weavers and Magic Crafters.

They lean into the magical, dragons and wizards aspect of the setting in their music and their world design. It really works for what is essentially a lazy collect-a-thon game.

Needless to say: The game looks stunning. As you’d expect from a major remaster such as this. I was wondering how faithful the world design as going to be compared to the pretty simplistic designs of the older game, but they’ve kept things almost identical. Which means there is this vast, open space feeling to what are actually pretty small stages.

The world’s are bright, colourful and vibrant. It harkens back to a different era of gaming. The world’s are exactly as they were in the original game, only made to look as pretty as possible with the far greater graphics capabilities of the modern consoles.

Even the Dragons themselves all fantastically redesigned. Where as before they were some variation on Spyro with different shapes and sizes, now they’re packed with character and individuality. This is the biggest aspect the developers took liberties with the game, giving the released dragons clothing, props and different extreme shapes and sizes. All depending on which world they were from.

Looking at the graphics from the original PS1 game, its amazing how much we filled in the gaps ourselves. Even the skyboxes are worth stopping and admiring before you continue your journey.

It managed to 120% the first Spyro in about six and as half hours. Two Super Charge puzzles were the only thing that slowed my relentless march to the end. Toys for Bob did a fantastic job with this remaster, keeping it faithful to the original while also making it a beautiful game. I moved straight into Spyro 2 after this, which I’ll get into when I eventually finish that one. But already, the Reignited trilogy is a fantastic throwback to the original games, wonky camera aside.

One thought on “Spyro Reignited Reviews: Spyro the Dragon”