It’s take me a little bit longer to work my way through Spyro: Year of the Dragon in comparison to the previous two, which I seemingly tore through. There’s a few reason for this, firstly, this was really my first genuine attempt at playing the game. Not having any real access to it back in the day.

The second of which, not to spoil where I’m going with this, but Spyro three simply isn’t as good a game as the two that came before. It’s not like Insomniac did something majorly wrong with the formula back in the day, rather, Year of the Dragon seems like simple iteration. Giving it shades of a game made of obligation rather than passion.

The story feels like something of a combination of events from both the first and second games. Like the first game, you’re main task is to rescue Dragons, the big difference being that the dragons are “trapped” in eggs rather than crystal. And they’re babies. Similarities to Spyro 2 appear in the game’s use of reoccurring side characters and each world the player visits being inhabited by a unique set of locals.

The dragon eggs which have been stolen by an evil Sorceress, her apprentice and their army of “Rhynocs”. The Rhynocs are a common enemy throughout worlds, much like the frog-like gnorcs of the first game. Although not the exclusive enemies. 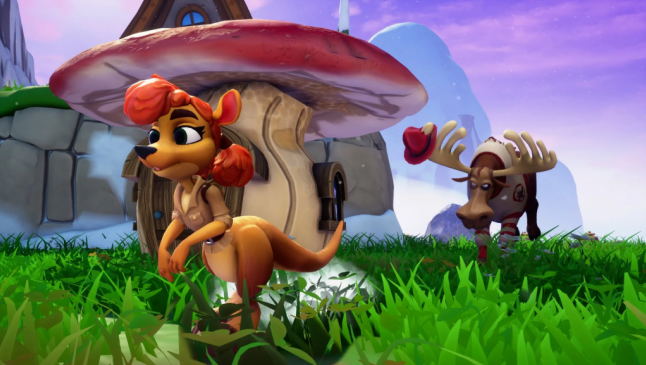 Of this villainous cast, most of them all pretty forgettable, the Sorceress herself is a wronger character than Gnsty Gnorc, who lacked a presence in the first game at all, but pales in comparison to the bumbling Ripto. The most memorable character is the Sorceress’s bumbling apprentice; Bianca the Rabbit.

In what feels like the beginning of an Insomniac trend, the masked, apparently evil female character eventually makes a face turn and eventually becomes a romantic interest for one of the main characters, in this case Hunter.

The story in this game feels kind of disconnected. While Spyro is hunting for the Dragon eggs and Bianca is making a vaguely threatening appearance every now and then, nothing ever feels dire. The tone is never anything beyond “merry jaunt”, which isn’t to say the previous two games ever had any sense of genuine peril, but it lacks one notch of connectivity that makes the world feel like anything but a collection of completely disassociated worlds.

In terms of Spyro himself, the majority of game play remains unchanged. The abilities unlocked during Spyro 2 all remain at the player’s disposal from the beginning. The primary new addition to game play in Year of the Dragon comes with a number of new playable characters. Introduced slowly as you progress.

As you bribe Moneybags to release these character from their cages, little sings pop up throughout the worlds, with sections of game play tailored to these characters and their abilities. More vertically designed levels make the most of Sheila the Kangaroo’s high jump, Long range targets litter Agent 9’s third person shooter based game play and a large, brute force approach to Bentley the Yeti.

If that wasn’t enough, we also get to take control of both Hunter and Sparx the Dragonfly during select portions of the game. All of these different character with all different control schemes and style of play really should mix up the game in a big way. Personally though, I’m not a fan. 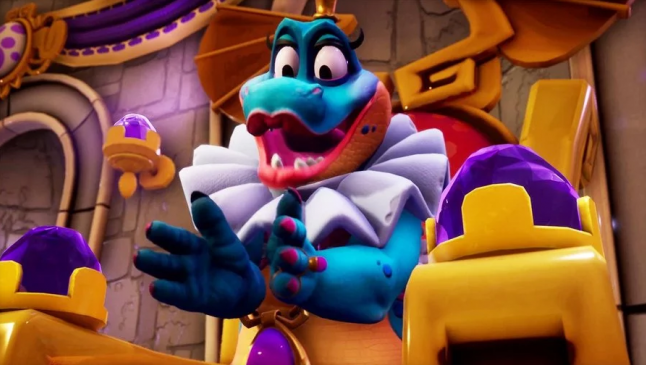 These changes to game play break up the flow too much for me. It’s a jarring change that more often than not feels unwelcome. The problem is, they happen so frequently and with such a number of characters that I oftentimes don’t feel like I’m even playing Spyro anymore.

In a previous post, I draw comparisons between Spyro the Dragon and Sonic the Hedgehog, mainly due to their attitude and tone of their characters. Year of the Dragon evokes Sonic even more so, a specific era of Sonic in which multiple playable characters broke up game play in a way that reflected badly on the series.

If that’s not enough though, we get an all new aspect of game play for Spyro himself, in the form of gluing the player to a skateboard and forcing them into completing challenges in skate parks and participating in races. A aspect of the game I couldn’t stand.

Spyro 3 dives deeper into the more open and varied game design approach of Spyro 2, especially in comparison to the first game which was more of a collect-o-thon type of game. This type of iteration is good in theory. Continuing to add more to the game to keep it from getting stale. The problem with this approach though, is that players run a higher risk of bumping into parts of the game they don’t like which didn’t exist before.

I’m torn. This game, much like the rest of the trilogy, looks fantastic. It has the same crazy level of polish we expect from a Blizzard or a Pixar. Each of the game’s world’s are bright, vibrant and colourful. However, much like Spyro 2, everything in this game lacks any kind of cohesiveness. There is nothing to link one world to the next, they all feel like a setting that could exist on as a part of their own game.

While this never bothered me as a kid, the first Spyro had such a strong sense of identity and tone throughout it’s stage design, it’s character design and its music. That the utter lack of any in the sequels makes me long for a world with some kind of identity.

I feel like I’m just cruising through this bright and colourful world in a very stream of consciousness kind of way. I struggle to care about each individual world because once I leave, there is nothing to tie me back to it. It leaves the mind and is replaced by something completely different.

Or in the case of Spyro 3, not different enough. As faithful as these remastered versions of the games are, it makes some of the corners cut between this game and the last more apparent. 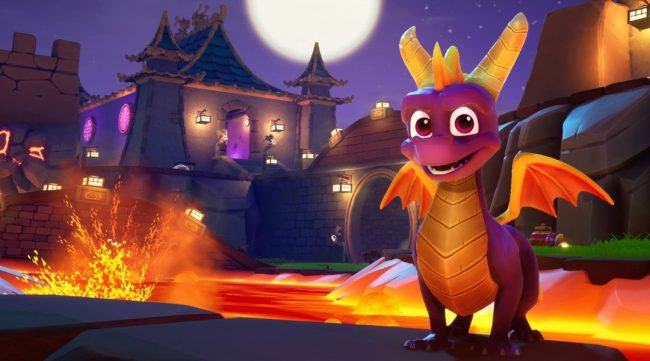 A number of times throughout the game, it’s pretty obvious that the developers simply reused character models and designs from the previous game and threw them into this game. Specific enemies from Spyro 2 return without much of a reference to it. It just adds further to the mix and match approach to the game’s design.

Specific character do return in the game briefly, but it doesn’t always make sense. The caveman with the floss dancing skeleton buddy reappears for the same mission he did in the last game, only this time he appears in a world of modern tech hippies focused. You also see the kinda evil, psychic powered children return, who felt out of left field in the first game.

Strangely enough, primary characters from Spyro 2 like the Professor and Elora return in the final stages of the game, implying that not only have the dragon worlds found some kind of permanent connection to theirs, but they have somehow managed to find a way to these lost worlds the third game takes place in. So if they’re here, then where are the rest of the dragons to also help Spyro out. 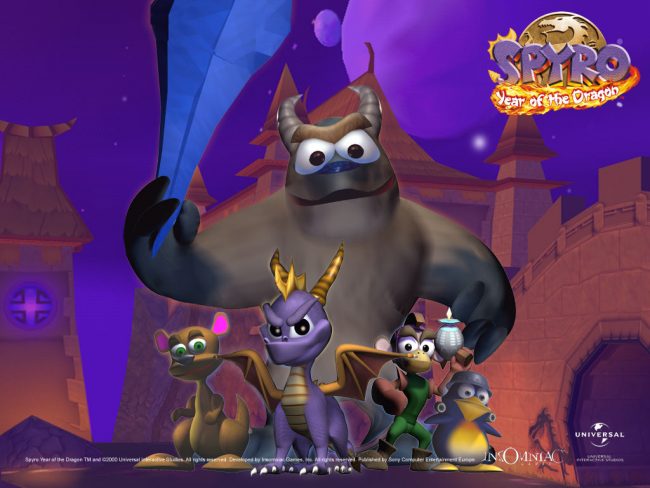 It might seem like a trifling thing to get hung up on. But it makes the game feel like it was made by the seat of someone’s pants.

Don’t get me wrong. This whole produce, this Reignited Trilogy is an amazing product. Rendered in stunning modern fidelity graphics and incredibly faithful to the original games. Maybe, sometimes to its own detriment. My faults here are mainly to do with the games as they were upon release. They’re of a very different time, and without the benefit of nostalgia to drag me through, Year of the Dragon was a much more difficult sit than the previous two.

It’s a game that shows Insomniac’s first exploration into a series, and I think they learned a lot from it going forward as they moved into Ratchet and Clank. Having finished the previous two games 100%, doing that in Spyro 3 feels like a little too much of a chore, especially with so many other games to play right now.

Year of the Dragon is a game that feels like it was made out of obligation rather than a real desire to further the series, but then again, it was a different time. One in which reusing assets and changing little was not frowned upon as it is today. It’s a shame to end this series with a fizzle rather than a bang, but overall the Spyro Reignited Trilogy had to work with what it had, and in that regard it’s a fantastic game for any fan or the genre.

One thought on “Spyro Reignited Reviews: Year of the Dragon – A jack of too many trades”