Between the two new images of what Sonic the Hedgehog is going to look like in the new live action movie, my Twitter feed has been alight with rage and ridicule for the choices made regarding this movie’s character design. It’s kind of funny that it’s one of the few things I’ve ever seen the internet unanimously agree on.

So much so that one of the movie’s primary writers still went onto Twitter simply saying “Everybody relax.” Are the people working in the American film industry really this blind. How their choices when it comes to re-purposing Japanese properties into western movies always comes and bites them in the ass.

Or maybe they Just don’t care

I feel the people behind this movie, and all movies like it… There’s an inherent misunderstanding of why characters like Sonic the Hedgehog are so iconic. Their designs have withstood the tests of time because they’re so simplistic,  they’re timeless and effective at putting forward a basic message.

Sonic is one of the most recognisable character designs in all of media, and yet the people behind this movie either don’t understand this, or they simply don’t care. They’re in denial, that their original take on a character is somehow better than the design that has been popular for multiple decades. 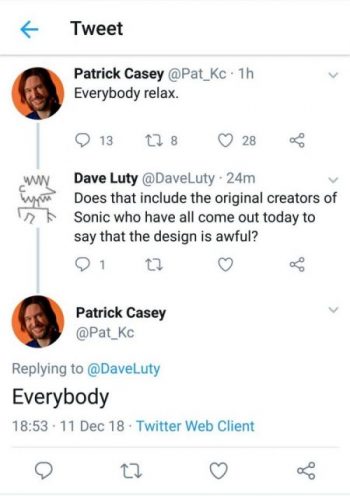 Honestly, it comes across as so arrogant. Why take a design that has stood the test of time for nearly 30 years with only minimal changes and then mess with it? Unfortunately. It happens all the time in the movie industry; people in positions of power under the delusion that they know what an audience wants better than anyone.

And we see it happening all the time. The Hollywood movie machine somehow consistently fails to recognise Japanese design, influence and culture as anything that can sell in their home markets, despite every statistic under the sun telling them otherwise.

It’s fantastically out of touch, It’s also a sign that they don’t want to accept that their industry has fallen from the the top of the mountain when it comes to popularity, influence and financial income.

It’s almost like they’re trying to sabotage the competition

Between video games and iconic anime franchises, at least in terms of pure financial gains, Hollywood is dropping further behind all the time. But their inability to recognise this in how they treat other forms of media makes the industry in it’s current form seem dated.

Which isn’t to say that cinema itself is becoming irrelevant, but other forms of media are simply getting better and better while mainstream movies are stagnating through being so risk adverse and franchise driven. The very fact that these other properties outside of movies are so successful makes Hollywood’s inability to get them correct all the more confusing.

Pokemon is the highest grossing franchise of all time at this point. A Japanese property based on a video game franchise. It makes more money than Star Wars and Harry Potter. Long running anime like Dragon Ball and Fist of the North Star are globally making more revenue than franchises like Toy Story and James Bond. One Piece and Yu-Gi-Oh are making more money than Transformers for Christ’s sake.

Hollywood has to see this, and rather than trying to see how they can incorporate these fandoms and franchises into their own business faithfully, it seems like their attitude is to try and exploit it instead. To twist it and change it to fit their dated mentality.

In reality, if they didn’t spend so much time and money on trying to alter designs and stories into something more “acceptable”, not only would they have a cheaper movie, but they’d be applauded for their success and faithfulness to the source material.

It’s okay for Patrick Casey to come on Twitter and tell people to relax, but surely people like him must have known this reaction was coming. I don’t know how they could have expected anything else. With the history of video games in movies, in which Hollywood constantly mishandle franchises, and Sonic’s “special” fandom, of course it was going to get ridiculed.

And maybe that’s actually what some of the people behind this movie wanted.

At this point, online outrage at a western remake of a video game property is something you could set your watch to. And despite their terrible track record, people still go and see these movies. Executives know that idiots like me were still going to see Dragonball: Evolution at the cinema despite knowing full well it was going to be terrible.

Are they so afraid of making something potentially good that they’d rather bank on making something actively bad? They’ve got the historical data showing that people will see the movie either way. Do they just take the negative press on the chin knowing full well that people will still go and hate-watch the movie… I’m foraying into tin hat speak if I dig any deeper into this though.

In the end, they could have very easily made a movie in which Sonic looks almost identical to his modern video game iteration, and it would have worked just fine. Absolutely nobody would have given them any grief about doing it that way.

There are plenty of movies that show integrating animated characters into live action while keeping their iconic look works just fine.

Space Jam, Last Action Hero, Who Framed Roger Rabbit all did it and were applauded for their choices and execution. the irony isn’t lost on me that these are all western properties with some ties to Hollywood already. But with Sonic, with the upcoming Monster Hunter Movie. The people in charge make seemingly arbitrary choices to include human protagonists or mashing up the reality from the franchise with a real world.

Yeah, because people wouldn’t be able to accept a fantasy world if they couldn’t see a crack military unit to anchor them into some form of reality. Thank God there were a gun toting, smart mouthed team of commandos included in the Lord of the Rings trilogy or else I wouldn’t have been able to connect to that world at all. Oh wait, that’s another western franchise, never mind.

I guess this post kind of works as a sequel piece to when I spoke about the Detective Pikachu movie.

It’s a good comparison to be honest. While people have made fun of the realistic Pokemon designs in that movie, on the whole, people seem positive about it. For one, it seems to be solidly set inside the Pokemon world. And the Pokemon themselves, while disturbingly detailed, retain their core design.

In a time where anime is completely mainstream in the west, where the most lucrative industry in the world is video games and comic book movies are being treated with reverence and respect in Hollywood, it’s astounding that Hollywood can’t get movies like Sonic the Hedgehog right for its audience without the owner of the property itself butting in to take some degree of creative control.

Maybe this movie won’t end up looking as bad as it does right now. But I’ve personally got zero faith in it being anything but another forgettable video game adaptation.