The third season of Attack on Titan snuck up on us. It seems as unlikely as the Titans in the show doing the same thing, and yet they both managed to pull it off without much effort. After a first season of relentlessly grim death and destruction, the second season brought us out of the gloom and started to provide us with plot that wasn’t just killing off every character you knew and loved, we get a new chapter. One following on from the mystery borne from revelations that there is more to the monsters than it first appeared.

The start of the episode does a surprisingly good job of reminding us where we left off after a pretty densely packed second season. One that became less about the Titans themselves, but more about the external forces who, like Erin, can turn into Titans, and why they’re infiltrating the Walled Cities.

It sums up each character in a nutshell, Erin is overly intense, Mikasa is stubborn and ripped AF, the girl who likes food continues to like food. Before getting back on track and reminding us that Erin needs to be practising his Titan form in order plug the holes in the walls left by the armoured and colossal titans in the last season.

I kind of forgot how useless Erin was as a protagonist. The rest of the main cast are incredibly skilled or talented in some regard. Erin just bumbled his way into being important through luck and a lot of yelling.

It’s here that we’re reminded that the desperate horror of the first season was replaced with that of a politically driven betrayal and murder show, like an anime Game of Thrones. The Military Police are on the rampage, killing people aware of the true nature of the wall and out to capture Erin and the Krista, recently revealed to be Histoia, an illegitimate child of a lesser lord.

The rest of the episode has more of a focus on Captain Levi, who was primarily out of action for all of the second season, as he outsmarts and outmanoeuvres everyone. That is, until he doesn’t. The episode ends with the appearance of the infamous Kenny, and we see angry Levi screaming the name that was all over the trailers for this season. 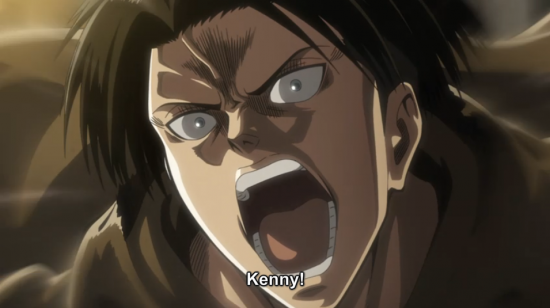 While the desperate nature of the first season was the thing that rocketed this show into popularity. It has very quickly become something else. The grim reality of this world was initially the focus, but that depth of deep misery can only take you so far. Very quickly the show’s nature as a series of mysteries with intermittent action came to the surface.

I hope this season focuses more on Levi as this episode seems to imply. I think pretty much very character in this show is more interesting than Erin, and the less of him we get in this series the better as far as I’m concerned.