Take one part Pacific Rim mix it with some Starship Troopers then add a dash of Edge of Tomorrow. Mix it all into Advance Wars/X-Com like combat and this is what you end up with. Into The Breach is the second game from Subset Games, and the followup to FTL: Faster than Light, a game spoken about on this blog none too long ago. 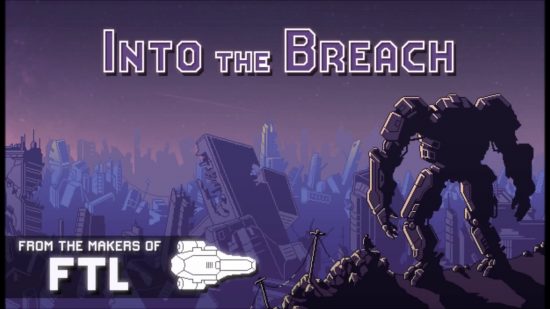 During development, Subset said the core inspiration for this game spawned from the observation that in most blockbuster movies, there is a lot of collateral damage with little to no repercussions. Into The Breach takes the conceit that defending humanity is kind of pointless if you destroy them all in the process and turns it into a smart, fast paced action strategy game.

Into The Breach takes place in a future setting in which the oceans have risen and all human life resides on a small collection of archepeligoes, all owned and ran by a collection of corporations. These corporations are all based around keeping humanity going, focusing on things like preservation of history, reclamation and reuse of what resources are available, terraforming what little land they have and developing robotics to ease quality of life. Life on these last bastions of humanity is being threatened by the Vek, a race of building sized insects. They hate us for no reason other than they’re bugs.

Humanity’s only hope are small squads of equally large mechs, tasked with repelling the Vek while also working towards putting and end to them at their source. That isn’t all there is too it, there are a handful of named pilots, each with their own reasons for working towards eliminating the Vek, not just from this timeline, but every knowable timeline. 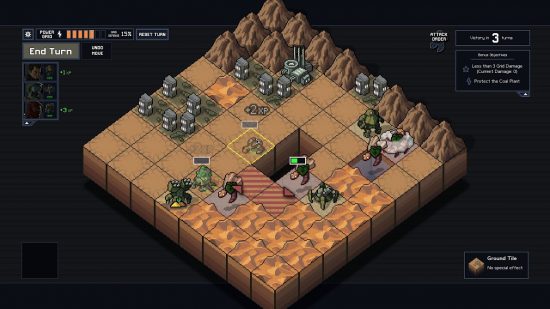 This is the game’s in-world justification of its roguelike element. At the end of each run the pilots must abandon their mechs, and the current timeline, in order to go back and start again. Even with success, the pilots have no choice but to abandon the timeline or else get destroyed by the bomb that eradicates the Vek nest, thus they’re tasked with saving every possible timeline from the Vek. A literally impossible job.

Like FTL before it, Subset do a great job of surfacing their story throughout the game. They have created another fascinating little world for their game’s robust mechanic system to exist in and it all bubbles to the surface little by little. Each character have their own history and personality that gives context and depth to each of the island corporations and the history of the war as they comment on events during gameplay.

Subset seem adept at giving enough information to make their worlds fascinating, but encouraging the player to actually want to do the mental gymnastics to fill the gaps in themselves. Ultimately though, the repayable nature and short length of runs makes the story all secondary to the game’s robust mechanics based around positioning and strategy. Comparisons to various grid based games could be made here, even chess seems apt as everything is about positioning and defence of important squares. 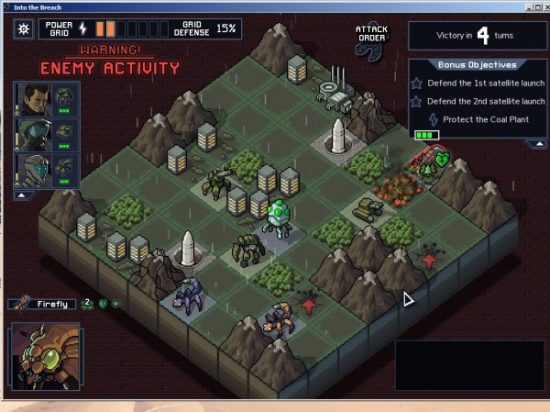 Gameplay is broken up into visiting each of the four islands in turn and completing a number of missions before clearing the island by defending the C.E.O. tower from a powerful “alpha” creature. Combat is turn based, but instead of each player taking their turn in order, the player gets their move in the middle of the enemy turn. It starts with each Vek repositioning, then displaying their next attack on screen, as well as its range and damage it will cause.

From there the it’s up to the player to act in a reactionary fashion to the various threatened squares before the round ends by the Vek executing the attacks they set up for, if they are still able to do so. The primary threats usually come to the building settlements that litter each stage. As mentioned before, the game is about avoiding collateral damage, so if the idea of saving thousands of lives wasn’t enough, the game gives a mechanics reason to do so.

Each structure is connected to a power grid, which is the thing that powers the Mechs the player controls. If the power grid is totally destroyed then there is nothing standing in the way of the Vek destroying everything, thus the timeline must be abandoned. Each Mech has its own unique abilities to damage or reposition the threatening Vek, and the players turn is spend figuring out the best method of preventing the damage by either killing the Vek, forcibly moving them or even blocking the damage with their own bodies. 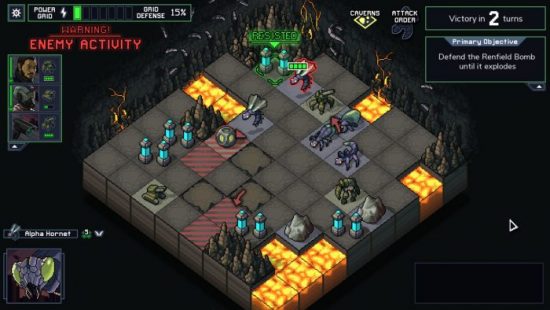 While the player only has access to one team of mechs to begin with, as they play more, additional teams become available to them. All made up of three of the four different mech types available within the game. These include “Primes”; bipedal robots which usually act as the vanguard of a team, “Brutes”; more traditional military vehicles, “Ranged Mechs”; which usually avoid direct conficlt in favour of mortar strike support and “Science Mechs”; which have a variety of abilities ranging from shield projection to tractor beams to teleportation.

While each of these mechs all have their unique load out to begin with, there are random rewards and a store system at the end of each island that allows them to be modified however the player wants, as long as you have the necessary reactor power to do so. On top of this, each named pilot has a unique ability that affects the play style of the mech they’re using.

Player’s are able to access these extra tools by completing option extra missions on each drop. Every time a stage is loaded, the C.E.O. of the current island will present you with 1-4 different additional objectives on top of defending the man-made structures scattered around. Each provide a different reward if completed ranging from additional grid power to reputation which can be spent upon the completion of an island on upgrades.

It all comes together to make a snappy, fast paced strategy experience that has a huge amount of lasting potential thanks to its procedural generation of stages and enemies and the huge combination of scenarios that can occur based on your available options and map layouts. It plays more like a puzzle game than an action game, as the player needs to take every little variable into account to try and turn a situation to their favour. 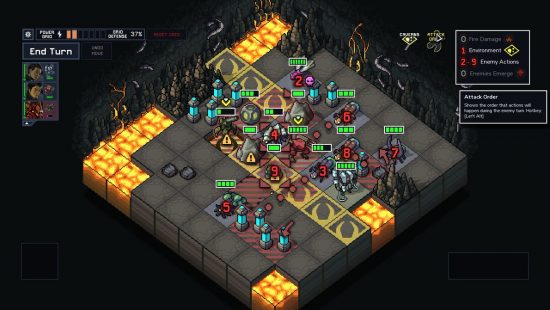 What makes this all works so well is that while FTL felt punishing at times for no good reason, Into The Breach’s difficulty is all telegraphed loud and clear. You are always made well aware of the obstacles you need to overcome, it’s down to you to figure out what combination of movies and abilities you have at your disposal that will get your out of trouble. Failing that, you need to decide which sacrifice you need to make to salvage a bad situation, be it the pilot of your mech, or your harder to replace grid power.

The complexity from the game comes from the numerous mechanics all working together at the same time. Contenting with environmental effects on certain maps, status ailments and future threats of the continuously breaching Vek. On higher difficulties, you can spend ages racking your brain about how to rescue a dire situation without ever realising that highlighted lighting strike will solve the problem for you before the enemy would even have a chance to attack.

It is forgiving enough to allow you to roll back movement if attacks don’t line up the way you want, or restart the turn entirely once per mission.

The rapid pace of the missions realy works in the game’s favour too, only lasting 4 turns means you can knock a few missions out if you just want to kill a few minutes. The problem from this comes from the “just one more” nature of the missions that can end up taking hours of your time, much like FTL did before it. It really feels like this game was tailor-made to be played on a mobile device, like a tablet or the Nintendo Switch. 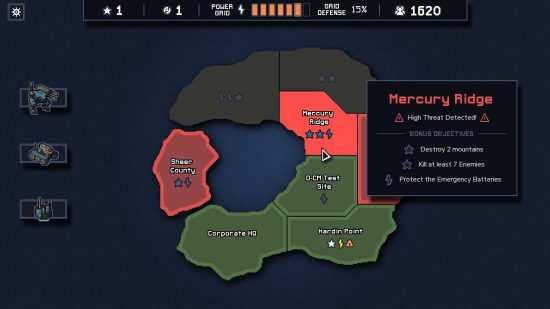 The game has legs too. While it might seem a player could get everything they needed out the game very quickly, Subset are very good at adding a meta progression to their games that keeps interest for a long time. There is a sheet of achievements in the menus, each of which rewards a coin. These coins can be used to buy more playable Mech teams. Each of these teams also has three achievements associated with them, which encourage unique styles of play. It’s a fantastic way of surfacing all of the game’s mechanics to the player while ensuring they get the absolute most out of the game.

There is a scoring mechanic too that can give hardcore players the chance to make their own custom team builds and try and find that perfect run.

Into the Breach is an excellent followup to FTL, building on the things that made that game so alluring while completely doing away with its weakness. Namely its frustraigng difficulty and elements of randomness, any randomness here is only ever positive, which is the way is should be. The only genuine criticism of the game is that it is only available on PC right now, when it feels like it needs to be on some kind of mobile platform. It’s a great little strategy game that can take either 15 minutes or 50 depending on how deep you want to go.

One thought on “My Thoughts on: Into the Breach”