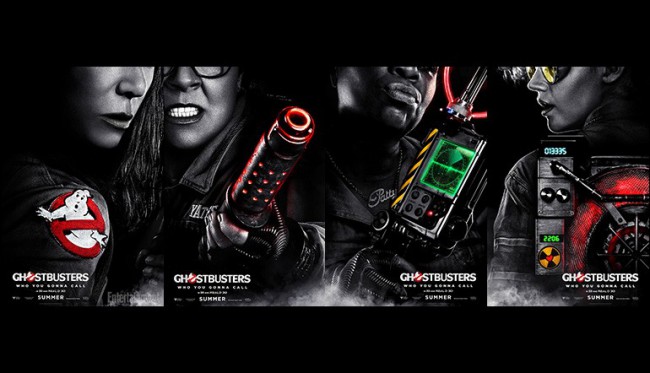 This reboot/revival/re-imagining trend when it comes to branding movies, video games and television series is nonsense of the highest degree. It’s been going on long enough now that you pretty much need to quantify every movie you watch with a year, or the director, or whoever starred in it. I’m almost surprised the Jurassic World went with the Super Mario scheme of naming rather than just using the name of the original again. In a world where there seems to be a stigma surrounding franchises that go beyond a third instalment, there are so many other ways you could have gone with it, the precedence is there.

The movie’s even a comedy, so you could have gone really cheeky with it. Ghostbusters Return, Ghostbusters Strike Back, Ghostbusters and the Temple of Doom. You get what I’m driving at here. It doesn’t help when it’s based on a beloved 80s franchise that many people still hold very near and dear to their hearts, and more importantly is still at the forefront of many people’s minds. There is a certain amount of bullshit surrounding them calling the straight remake of Point Break the exact same thing, but people don’t have quite the same reverence for the Keanu Reeves surfing movie as they do one of the most iconic movies of the 1980s.

Okay, being totally honest here. I don’t have a lot of enthusiasm for this new Ghostbusters movie. Mainly because I’m not a big fan of Kristen Wiig or Melissa McCarthy. I don’t especially find them funny, nor did I like Bridesmaids or The Heat that much, which came from the same director. But I know people who do enjoy them, they’re simply not movies for me. With all the ingredients thrown into Ghostbusters Forever, It’s a recipe for yet another movie that isn’t going to be to my tastes. Movies are a product of their time. When it comes to reviving old franchises, there is a knife’s edge to be walked on. How much are you going to pay homage to the original, and the extent to which you’re going to remake the tone of the movie for a modern movie going audience. Considering modern comedies all seem to be cut from the same crappy cloth, I’m not holding my breath.

So this leads me to the inevitable question: Would I rather this be a new movie with the original cast? Not really. As much as I love those characters. It’s been over 30 years and aside from one of them being dead, I don’t need to see them trotted out to stroke my nostalgic member. I’m happy with the movies I have thanks. It’s why I was so, so happy that Robert Zemeckis said that while he was alive there would never be a Back to the Future reboot. Some franchises are better off left alone, to age with dignity. We didn’t need another Futurama/Red Dwarf/Robocop/Battlefront/Point Break/Die Hard/Terminator.

Reguardless of how good this movie will or won’t be, and regardless of my misgivings of it based on it’s director and starring cast. Just call it Ghostbusters 3… or Ghostbusters on Stranger Tides… Or for God’s sake “The” Ghostbusters would have been suitable. Gawd… Instead we need to call it Ghostbusters ’16, or more likely “the bad one”. Because come on, it’s never going to be as good as the original, experience has taught us that.

One thought on “Stop confusing me with your movie titles”