Of the small batch of anime from this previous fall season, one of the shows that jumped out at me was Ascendance of a Bookworm. A genre of show I don’t normally find myself drawn to; an Isekai. Ascendance was atypical of the genre though, as most Isekai I stumble across tend to be power fantasies, this show was not. At least that’s how it started out.

As the series went on, I started to get suspicious of the main character’s “illness” and how the series might take a sharp turn and start to lean into the very aspects of the genre that traditionally turn me off them. It drew me into a series full of warmth, character and charm and then pulled the rug from under me with a good old bit of Pope-choking.

I’ve probably brought this up before at some point, but the power fantasy aspects of Isekai shows end up kind of boring me more often than not. I get that the action and battle aspects of the series aren’t generally the point of this genre, but I struggle to get invested in the shows that do treat the battles with some weight and importance when they inevitably end up lacking any of it when push comes to shove. 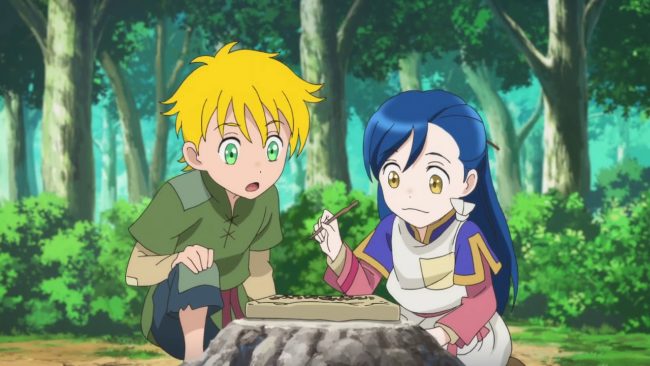 It’s why I ended up giving up on that show about the guy resurrecting as an all-powerful slime creature a few years back. It’s all good having a show with no stakes when it comes to the protagonist, but if you’re going to still present stakes for them anyway, there needs to be something worth worrying about outside the simple fear of defeat, which never seems to happen. Unless the side characters end up being the ones you actually care about in the end, for example.

Ascendance of a Bookworm was different though. While it very much was still an Isekai, and very much starring a protagonist who was “overpowered” in many respects, this was all offset by her having just as many handicaps as she had advantages. The woman who would die to become Main was exceptional in only that she was exceptionally well read.

Waking up inside the body of a very young girl of a poor family in a relatively low fantasy world, all she really had going for her was a mature contemporary mind and the contents of it, which appeared to be that of a person with pretty exceptional general knowledge. No real superpowers, no physical advantage, just the equivalent of having a modern encyclopedia stuffed in her head. 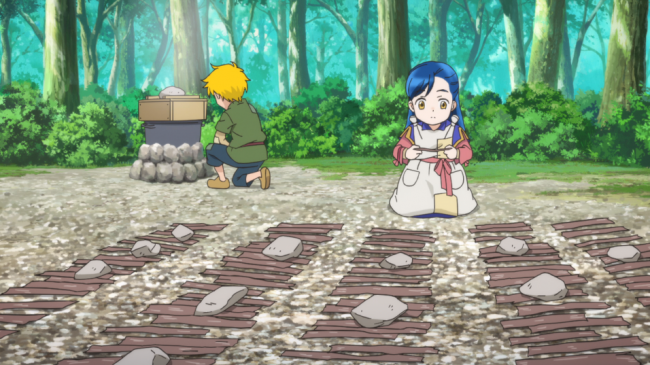 Unlike a certain Senku though, Main’s drive to find herself surrounded by books was marred by her pretty severe physical handicaps. For one, she was inside of the body of a young child, and a pretty frail one at that. If that weren’t enough though, she was also suffering from a mysterious illness that eventually is revealed to be something called “The Devouring”. Which knocked her on her ass pretty frequently whenever she overexerted herself.

It’s these handicaps that really drew me into the story of Ascendance though. Unable to do everything herself, Main ends up relying on her new family and friends for help to reach the goals she has set for herself, not content to grow up a peasant. It’s a real underdog story, one that is more focused on Main’s growing relationships with her family and the friendships that grow around her establishing herself as a genius inventor, bringing things like shampoo and pound cake into this medieval era world.

Along the way though, despite Main’s extreme stubbornness to either find her way into an environment with books, or to write them herself, she learns the value of something more important to her. Despite eventually getting into a position that will give her an easy way out, she realises this new family she has found is more important to her. Stating “If I can’t live the life I choose, what’s the point in living.”

It was a great message to promote and the thing that really tied me up in these characters and their lives. As the story unfolded though, there were moments where I started to suspect this series was going to go somewhere I’m not sure I wanted. Main’s illness begins to manifest itself as something a little more complex than generic frail female character syndrome. At a point early in the series, Main gets angry and when this happens her eyes start to gain a rainbow shimmer and an aura starts to manifest around her. This is where I started to suspect I was being lead into a false sense of security.

As we learn more about this “Devouring”, it’s revealed that it’s not a traditional illness, rather it turns out to be an excess of mana. Something that is actually killing Main. At this point, Main’s goals start to change. Rather trying to return herself to a world of books, the work she is doing with the merchant’s guild starts to aim in the direction of controlling her condition and prolonging her life.

It was an interesting twist and one that added an extra slice of drama to the series, one that lead into a touching arc in which Main started to genuinely value her new family and eventually chose a premature death rather than leaving and becoming the slave of some minor lord. It was a touching moment.

When I start to think I can see where this series is going to end up going, within the final few episodes, things take a pretty sharp turn. Main suddenly discovers a library in the church and everything she’d spent the previous ten episodes doing flew out of her mind in favour of becoming a priestess and getting nose deep into those books. From here, we get a pretty late lore dump explaining how this world works and a confrontation between the bigoted bishop and Main’s poor family.

When things get heated, Main starts glowing again and straight up force chokes the bishop, near enough to death. But stops just before she can do something she would end up regretting. From here, a younger, more level headed bishop takes over and suddenly Main gets everything she wanted from the church.

After a dozen or so episodes of hard work, trial and error, blood, sweat and tears; Main displays a sudden overpowered magical ability and gets everything she wants without really having to lift a finger, literally. Suddenly the series felt much more like the traditional power fantasy Isekai show I tend to avoid. And I felt like I’d been taken for a grand old ride.

By this point, the show had built up enough good will for me that I wasn’t angry or anything. It was ultimately a very sweet show about family and choosing to live your own life by your own terms. Main starts this story obsessed with books, to the detriment of pretty much everything else, including her own health. As the story goes on though, she finds something she values more and ends up turning her back on the thing she previous obsessed over. To some extent anyway.

It’s just, we end this first series with Main suddenly in a position of privilege after displaying a superpower. So if we get another series, if Main going to be doing much the same as she was doing before? Or is she going to be going around pinning people to walls whenever they displease her like a Mob Psycho villain? I just kind of feel like this series put itself out there with characters, growth and an underdog story as a big long con to trick me into watching an Isekai series that I always complain about.

I mean, I’m going to watch the second series when it eventually happens… So I guess it worked…

5 thoughts on “Did Ascendance of a Bookworm just “Isekai Catfish” me?”