There’s an old expression that goes “life isn’t about the destination, it’s about the journey.” A lot of narrative fiction takes this same approach. We spend most of our time watching movies or playing games, traveling towards a final goal. But the ending; it’s only the bit at the end. The real bulk of the experience comes from all the juicy bits in the middle. It’s easy for me to say that when a narrative ties up in a nice, neat little bow. But when the ending to a story throws you for such a loop that it ends up leaving a bad taste in your mouth, then I’d argue that an ending can be just as important as the 20-100 hours that came before it.

I know people who would argue fervently that all endings are bullshit. That they’re there just because they have to be. Look at Skyrim for example, for most people that game ends only when you decide to stop playing it, not when the credits start scrolling up the screen. It’s a nice sentiment, but not every narrative experience is that open ended. Most stories have a defined structure that need a start, a middle and an end. I personally don’t think any one of these is more important than the other, but more often than not an ending is your parting experience with that story. Thus it’s the final impression the experience is letting you walk away from it with.

Even if you spend hours enjoying an experience, if an ending can take you out of that story and leave you feeling betrayed or confused, you’ve got no more story to buy you back in. It’s parting ways by leaving a sour taste in your mouth. Life is Strange is a game that did that very thing when I got around to finishing it.

Life is Strange, in case you didn’t know, is an episodic adventure game in the style of the Telltale’s reimagining of the genre. You play a teenage photography student called Max who discoveres she has the power to rewind time. From here, the story spirals into a tale of mystery, friendship and the consequences of playing with things you don’t understand.

Much of the game focused on Max rediscovering her relationship with her estranged childhood friend Chloe. The relationship between the two is the main focus of the game, endearing them both to the player as they look into the mystery of a student who previously went missing at Max’s College. The main strengths of the game are making the two protagonists extremely likeable, as well as being very realistic.

During the course of the game Max and Chloe get themselves into trouble, and Max (the player) needs to figure out how to save them both using her ability to rewind time to keep trying at it until you figure it out. It’s an interesting mechanic that compliments the strength of the writing and the characters. By the fifth and final part of the story, I was totally invested in the pair’s story and desperately wanted to see how it ended. What I got was somthing that that diverged from the previous tone of the game so sharply that is have me whiplash. 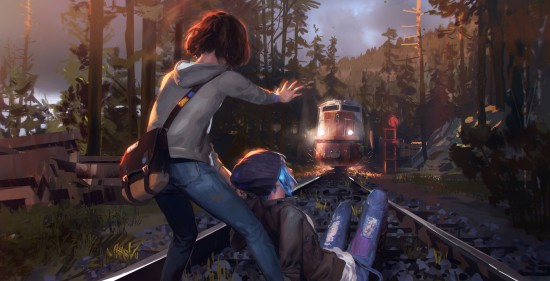 Life is Strange, like many of these narrative focused adventure games, only really gives players any urgency through dialogue choices they make. Although maybe urgency isn’t the right word, because every time you make one of these important decisions. The game makes sure to have Max second guess it no matter what choice you made, then prompting you to rewind time and change your decision if you choose to. Like many games of this type though, you choices are ultimately inconsequential to the final path of the story.

The final part of the game has Max going back in time through photographs and making changes that butterfly effect into what eventually becomes the present. The final part has the player jumping back and changing the course of events over and over, until Max is in an ideal situation where Chloe hasn’t been shot and she has won some accolade for her photography. However, throughout the game, a looming threat of a huge tornado has been hanging over the player’s head, just when it looks like everything has worked out, Max sends herself back into the past and undoes everything so she can be in town when the tornado hits.

The constant jumping about cumulates in Max coming to realise that the tornado is a direct result of her changing the timeline so much and everything comes down to one final decision. Either player player must go back to the very beginning of the game and allow Chole, the character the game has spent its entire length endearing with the player, to be killed. Or they let the town get destroyed and let Chloe live. 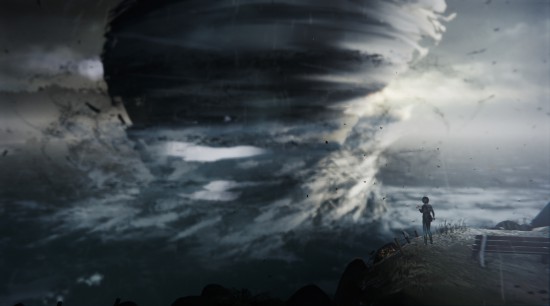 This “choice” at the end of the game gave me a lot to think about. While it felt like sacrificing Chloe was the correct decision, I had come to like the character so much that I really didn’t want to let her die. This is exactly the feeling the developers wanted to evoke in their players, and bravo to them for succeeding in that. The “real” ending is obviously giving up the relationship with Chloe to save the town and in a respect, giving up Max’s powers too.

The thing that really left the sour taste in my mouth though was that, after all was said and done, nothing I did during the entire length of my time with the game felt like it mattered as every decision I made was undone by that final one. In a way it felt like time wasted. I mean yes, ultimately it is all time wasted. But, the effort I made to help people throughout my with the game was undone. All of the choices laid out in the game were there specifically to emotionally manipulate me into feeling this way for the final decision.

Don’t get me wrong, I think the developer did a fantastic job of getting me invested in the story and the characters and then yanking the rug out from under you. I wholeheartedly feel like this was intentional on their part. But it doesn’t stop the fact that I walked away from that game unhappy and less willing to recommend it to others, the entire story felt like emotional manipulation leading up to a final choice that was bad no matter what “impact” player agency had on the events of the game up until that point.

Life is Strange doesn’t have the same type of bad ending to me that Fallout 3 had, in that a lack of foresight and understanding of their own rules made it so a dire situation had a glaring plot hole. It’s bad in a similar way to how Mass Effect 3’s ending left me so unsatisfied. It spends hours building a world you enjoying being in, only to rip it all away and tell you it can’t be that way anymore. Then leaving you hanging with no more resolution that bad feelings.

Life is Strange is a good narrative experience that seemed to intentionally be building up to ruining your day. And as much as I enjoyed 75% of that game, I still think about how it made me feel at the end. I feel bitter. You could argue that I simply don’t like surprise, or that not all stories have happy endings. But in the end, I can’t help how I feel and I feel like I was used and then tossed aside.

One thought on “Life is Strange: How an Ending can Ruin a Game”