A few weeks ago, the inevitable happened and Capcom announced the next entry in their hugely popular Monster Hunter series. While I was already a massive fan of the franchise, this being the first new Monster Hunter game since the series reinvented itself with World is big news. World managed to finally break through to that mainstream western market and finally get non insane people playing the franchise.

Right away, Monster Hunter Rise looks like it might be a combination of the best aspects of the both World and the old style Monster Hunter games of the past. And I’m super excited for it.

As much as I did adore those older style Monster Hunter games, there are undoubtedly some aged mechanics in there that ultimately turned off the less indoctrinated players of the game that ended up hanging around in the series much longer than their sell by date. It wasn’t until playing Monster Hunter World that I felt it would next to impossible for even me to go back and play a “classic” style Monster Hunter game.

Which is why I was really happy to see that a lot of the progressive changes brought to the series in World are continuing into Rise, some of which I’ll get into. First though; this game isn’t being made by the same team that made Monster Hunter World, rather it’s being developed by the team behind the portable games from the past such as Monster Hunter Generations.

Games which put further emphasis on customisation and being more experimental with what they added into the games. Many of which would eventually find themselves into the “core” games further down the road. Being made in the RE engine, Rise is being developed exclusively for the Nintendo Switch. Trying to promote a faster, pick up and play approach to its development ethos.

That’s the main thing that excites me about this game though, the developers have added a bunch of new, quirky mechanics to the game, but continue to emphasize ease of play and are retaining all those quality of life changes to the game. No more finicky item management needed for mining and big catching. No more frustrations involving paintballs wearing off. No more slow, deliberate maintenance and healing.

Everything in this game, especially the movement looks to be as quick and fluid as it’s ever been in the franchise. This comes with the addition of the two major new mechanics to the game. The first is the Wirebug: a grappling hook type item that allows the player swing and grapple into thin air. Allowing the player to dodge, wing across the map and dive into combat with more freedom and speed than ever before. 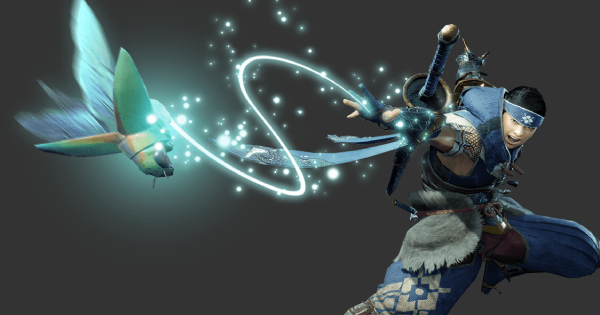 The other one is the Palamute: a new dog-like companion to accompany the series’ favourite Palicos. While the Palamute will assist in combat like its feline counterpart, it can also be ridden to traverse the map even faster. Which also frees up the player to conserve their stamina, sharpen their weapon or consume items without having to slow right down.

A lot of the gameplay shows these new mechanics being used in full effect and they seem so cool. Movement, and especially verticality, are a huge new part of the game in terms of moving around the map and in combat. Like World, hunting maps are one large space, rather than the separate areas of the classic iterations of the game. As a consequence, the darkened areas between the main numbered parts of the map become new short cuts or areas to farm resources.

Between the verticality the Wirebug provides, the speed given by riding the Palamute and the ability to just charge towards your target monster as the crow flies gives the player much more freedom to play how they want to play. Speaking of which, while Rise isn’t adding any new weapons to the 14 that already exist in the game, each of them is getting a bunch of new abilities that all use the Wirebug within combos.

In practice, the Wirebug is an ability on a cooldown. One that you have two or three charges of before it can be used again. Which means it becomes an important new source of powerful combos in battle, ones you need to use with caution as you’re also burning a potential resource to escape out of perilous situations. On it’s own the wirebug acts as a dash, one you can use in any direction. Which is useful for closing distance when you’re using slower weapons, or ones with a very short range.

But by that same metric, you can use it as a quick escape route. The tradeoff being that it looks like all of the weapons have some new combo or moves that incorporate the wirebug mechanic into it. It makes the combat look super cool, even more so than it was before. Seeing hunters fling themselves into the air before slamming down with a single powerful strike from above.

While World put a big emphasis on being big, set in wide-open maps that made the most of the franchise’s first foray onto the big boy consoles and PC, Rise pulls that back slightly. Giving us large open maps, but more compact ones that account for the quick and fast ethos they seem to be bringing into the game, what with it being a switch exclusive. One I get the impression they really want to push people to play in handheld mode. 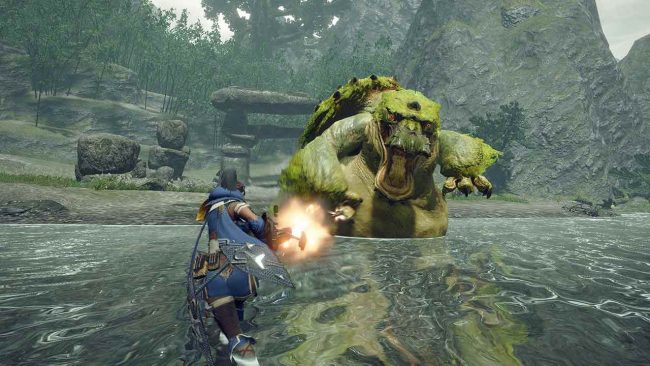 Which is why they spend some time talking about how they’re trying to improve the quality of life of the online experience. As good as World was, it still had its issues, and one of them was how much of a pain in the ass the multiplayer experience was when trying to play with friends. Rise is taking a step back in terms of scale, but the developer claim to be focusing on streamlining the multiplayer experience, and making it even easier for people to pick up and play even in the middle of hunts.

When this game got announced, I had a long list in my head regarding my hopes and desires for this new entry in the title in terms of what I wanted them to keep from World and what I wanted them to improve on, so far it seems like Monster Hunter Rise has already exceeded my expectations and thrown a few curveballs in my direction that I couldn’t have ever imagined seeing.

I’m super excited for this game to come out next March. And will keep my eyes peeled for any other major Monster Hunter news. And then feel massively disappointed when I realise it’s more information about that bloody Milla Jovovich movie.