I’d like to make the excuse that there wasn’t much going on this season due to lockdown and shows getting put on hiatus for a few months as a result. But if I’m being honest, there was a ton of anime out there to watch in reality, I just didn’t make the usual effort to go and try some different things like I had been doing the seasons previous.

That’s on me I guess. Then again, taking a breather for a month might not have been the worst thing. All I feel embarrassed about is how short this post is going to end up being as a result. But it’s all that Clone War’s fault.

The only brand new series I actually watched all the way through this season. I had mixed feeling about Tower of God throughout the middle segments, where I feel it became a victim of rushed writing. While the Webtoon goes to lengths to explain the stakes and rules of every event going on, the anime rushed through such things, meaning events lost their impact thanks to the full stakes not being established til after the fact.

That complaint aside, I felt like the world of the anime was hugely compelling, as were the characters themselves. I may have had my frustrations with the series and how it was adapted, but overall it was a hugely intriguing world that evoked feelings of the best parts of HunterxHunter.

It is an anime that will stick with me, one that’ll most likely get its claws into me and end up making me go and read the webtoon online. If you want to see the archive of me reviewing the entire series, then this link here’ll take you right to it.

As for continuing series, there were only a couple. What made me realise that this was just not going to be a massive anime season for me was the fact that the second season of Ascendance of a Bookworm was right there and I just kind of let it pass me by. That’s just like me right now though, as soon as a series hits five episodes, the prospect of going back and catching up seems like some insurmountable, daunting task.

I loved the first season of Love is War, did I love the second one just as much? No, not really. Don’t get me wrong, I enjoyed the hell out of it, that opening slaps more than the first season’s. But what has me thinking is; is this season inferior to the first one? Or did that first season simply hold a vice on my heard because it was one of the first anime I started watching when I got back into anime a couple years ago.

It probably is more of the first though, the first season did mostly focus on the primary two characters and their content attempts at cornering the other in a romantic confession. The second season is different in that is focuses much more on the supporting cast and the more general events of school life.

I really hope the series continues on though, because there’s some stuff in the manga that could be amazing when transitioned to screen in the same way the firework’s plotline from the first season finale could be. 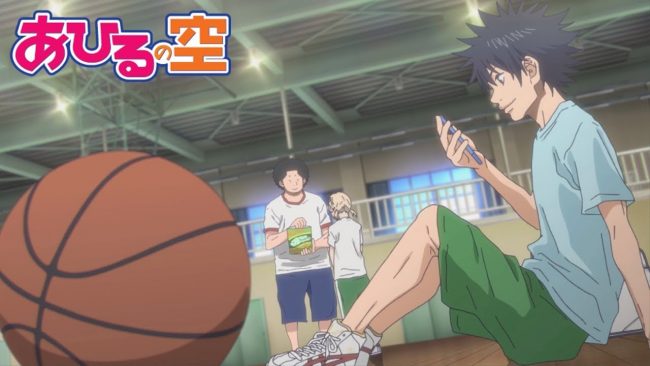 I haven’t written thing about Ahiru No Sora this season, but you’d better believe I’m still watching it. We’re still 15 episodes away from the end of this first season and I am totally, 100% in on this series, these characters and their journey to be the best high school basketball team in Japan or something.

I said it when I wrote about the series a few months ago, but I never really cared for sport anime before. Watching this series really has made me realise that the genuine passion for sport and competition is actually a perfect compliment to the over the top world of anime.

Seeing these kids slowly grow and mature as people as they pour themselves into the game, somehow able to be the ultimate underdogs in pretty much every match the play, which is drawn out in painstakingly dramatic detail over the course of a number of episodes. It works for me on every level, to the point where it’s actually made me genuinely interesting in wanting to know more about Basketball in real life.

Although I’m not sure if I’m willing to risk breaking that illusion or not quite yet.

Honestly, as of right now, this has probably been my favourite anime of the year thus far, in part thanks to it’s prolonged runtime that gives it the real breathing room for development that it needs. But it also does everything else right too. I’ll review the series in more depth when it’s over in another four months.

And that’s about it, I spotted Digimon Adventure has just started re-airing again this past week or so, so I’ll be getting back onto that. With the Summer season right around the corner, although it doesn’t feel much like summer here in cold and overcast England, I’m going to make a more conscious effort to give more anime a shot than I did in the spring season.

That being said, I should probably start looking into what’s going to be airing soon, eh. If anyone has anything to recommend, don’t hesitate to shoot me up.