This week’s episode picks up right were last week’s left off. Which, for some reason, comes to a surprise to me. I just assumed we’d just straight to the festival, but we get to see the aftermath of the fight between Gentle and Deku instead as some of the things I said about the characters last week come to some kind of fruition here.

Midoriya seems to feel some kind of sympathy or connection to Gentle, and when he returns to the scene after being blown back, he puts in a good word for them with the professional heroes Gentle has handed himself over to. Both parties seem to want to smooth things over for the other, with Gentle ensuring the festival goes on as best he can, while also taking full responsibility in the hopes of getting La Brava a pardon.

With that all under control, and any possible destabilizing drama brushed under the rug, we can get back to the thing that was the entire point of this arc to begin with, and something I somehow forgot was actually happening, what with the battle that took place over the past couple of episodes. 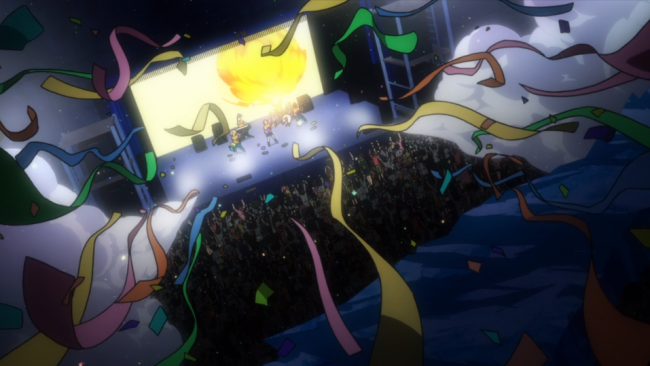 The festival finally gets to happen, being kicked off by the musical and dancing performance of class 1-A. Most of the student body seems fairly enthusiastic about the show, shown by the chanting for Yaoyorozo. She’s popular amongst the male students of the school, who’d have thunk.

We also get the added layer of the disgruntled students from before, there to harshly judge the performance. Remember, because they blame 1-A for how under lock and key the school is. Yet, all I think is “screw those kids”. Even before the performance you know they’re going to be won over, but I honestly didn’t care. If petty people want to act petty instead of looking at the bigger picture, in a school that’s supposed to be training heroes, I couldn’t give a damn what they think.

Then we get the performance. It’s nice to get a pure celebratory moment for everyone after everything being so crappy for the kids for so long. The post-All Might world is certainly one going through a process of major change, and most of it not for the better. Seeing the kids just be kids and enjoying themselves is a great moment to have towards the end of this season.

As the dancing and effects intensify, and become pretty dangerous to be honest, we finally get to see the moment of it all breaking through to Eri and her breaking out into a big smile. Which has been the lowkey point of this entire arc from an emotional stakes writing standpoint. And it’s such a sweet and wholesome moment, but not as sweet and wholesome as Mirio starting to cry at the sight of it.

Because he is a big, loveable dork.

From here, we cut to different parts of the festival. Seeing 1-B perform “Romeo, Juliet, & the Prisoner of Azkaban: The Return of the Kings” Which is exactly what it sounds like, it even has a bit of Star Wars thrown in there too. I’ll admit, it made me laugh.

Then the beauty pageant and a montage of the rest of the festival, showing Eri enjoying herself, making some huge steps in returning to some sense of normalcy for her after the horrific life she was forced to lead before now.

All of this is a nice little release after everything being so intense and gloomy for so long in the show. Especially with the similar feelings going on in the real world right now. This was just the kind of episode we needed to recharge and refresh before we lead into the last couple of episodes of the season.

But it’s not quite over yet, in a post credits scene we get one more little snippit of Gentle and La Brava. The police are dressing them both down and not really buying the whole brainwashing thing Gentle is trying to spin to save his partner some jail time. Yet, for all the talk I made about society letting the pair down in the previous post, here the police do the opposite.

They give the pair the opportunity at a second chance. A story I would personally love to follow.

You’ll notice all the times I spoke about Gentle, I never referred to him as a villain, only a criminal. Because Gentle was never a villain, he was misguided and he broke the law, but he was never truly dangerous. And the ray of hope for him is one final positive moment for the episode to end on that I appreciated a whole lot.

This episode was mostly just mop up for the end of this arc. Giving us some resolution to Eri’s story and throwing a celebratory music video in the middle of it. It’s weird, I felt like this was going to be an arc focusing on Jiro when it started, but she only really got a small little segment in the middle of her making the choice between being a hero and being a musician.

She’s level headed enough though that any drama surrounding her would just feel forced anyway. I really got a kick out of this arc and it felt like it reinforced the aspects oft he show I really enjoyed. I’m sure the longer it goes on, the higher the stakes will get, as it the rule of escalation in shonen anime. But I’m happy we’re still getting these lighter stories as the show approaches the end of its 4th season.

One thought on “My Hero Academia – Episode 86: Let It Flow! School Festival!”