Within a medium where so many shows focus on character’s grit and physical abilities getting them through situations, it’s difficult to plot a purely cerebral character in to that same environment. When your lead’s main power is critical thinking, showing that off while keeping it believable is strangely more difficult than with someone who can shoot jet engines out of their heels.

I’d found that the inherent problem with writing a character with genius level intellect is that, unless you’re a genius yourself, it’s hard to portray them in a realistic way. When your hero can save the day using grit, determination and fighting spirit, all it takes is a suitably dramatic motivator to turn around a dire situation.

When a character has no such superpower to draw from, writing exciting and dramatic solutions to harrowing situations can be much more challenging for a purely cerebral protagonist.

It’s at this point I’ve seen many writers take shortcuts to solve their problems. Creating narrative shorthand to show how the character is super smart while allowing for them to make leaps of logic that are only justified because we’re simply not smart enough to keep up with them.

I feel this problem was exemplified within the first five episodes of Dr. Stone. In the series, we have Senku, a genius high school student who finds himself thawed out several thousand years in the future after every human mysteriously turned to stone. Starting alone, he decides to rebuild a technological human society using his perfect memory of science and technology.

The situation alone was an interesting enough pitch to intrigue me into the story, but in only the second episode the show decides it needs to introduce an antagonist. Through Senku and Taiju, thaw out Tsukasa; a super humanly strong teenager who is able to kill a lion with a single punch.

It’s not enough that Tsukasa is this weird super-powered being in what I thought had been established as a grounded world of science, but he’s also apparently super intelligent. And this is what bugs me about those early episodes of Dr. Stone. It’s not enough that the writer simply establish a brains vs. brawn dynamic between the protag and antag. But the villain apparently needed to be super smart too.

Which leads me to the situation we eventually find ourselves in: the battle of wits. Of course, people starring each other down and trying to out think the other is never going to be as exciting as people trading punches. But the problem that comes from this situation is how many writers seem to confuse being intelligent with being clairvoyant.

Rather than using intelligence to create situations to defeat the opponent, these kinds of showdowns inevitably come down to pulling one over on the opponent because they were able to somehow predict, with startling accuracy what their foe was about to do. And ensnare them in a trap as a result.

The most extreme example of this being Joseph Joestar in part 2 of Jojo’s. To use a technical term to describe Joseph: the guy’s a dope. But on top of being a dope, he is also said to be super intelligent. And his intelligence manifests in him suddenly being able to predict the words of his opponent before they say them.

This, of course, it simply narrative shorthand to show the hero has finally figured out a way to win against their opponent. It’s not a frustrating with Jojo, because the character is also a physical powerhouse as well. But again, it confuses being smart with seeing the future, or being able to read someone’s mind. That’s not how intelligence works, and even if it does. Predicting behaviour is only one, pretty niche display of intelligence.

When Senku and Tsukasa eventually square off, thanks to a series of perfect future predictions from Tsukasa in that them running away was a cover. He seemingly kills Senku, only for Senku to survive, also thanks to a series of plot contrivances combined with him literally betting his life on knowing exactly how Tsukasa would kill him.

A truly intelligent person wouldn’t bet it all on this very specific series of occurrences. They’d work out the certainties and factors around them and work with that, creating a plan A, B, C and a likely escape plan as well. If you think about it, predicting human behaviour is actually pretty low on the skill list of many intelligent people in the world. (see list of nerd stereotypes) It’s a trope that always bugs the hell out of me. 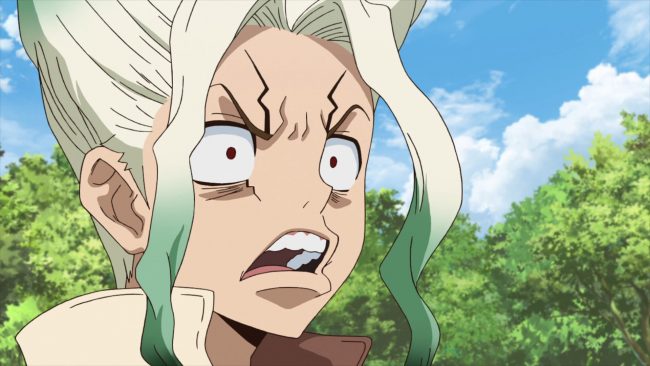 This little confrontation is concluded by making use of another trope that bugs me: When the protagonist’s intelligence starts rubbing off on the supporting cast. After Senku is seemingly killed, it’s down to Taiju and Yuzuriha to find a way of escaping along with Senku’s body. Up until this point, Taiju has been shown as being dumb as a sack of hammers. He main skills being his loudness and his seemingly infinite levels of stamina.

So, the fact that he and Yuzuriha seemingly read one another’s minds to create a weirdly contrived escape plan in the heat of the moment really took me out of the moment. It’s one thing having your super smart hero do something contrived and blame the audience for not being on his level, but to have characters who pointedly aren’t as smart do the same thing is irritating.

Not only does it belittle the “intelligence” of the hero’s actions, but it also belittles the characters acting smarter than they should too, making their own inherent character less important than emulating the protagonist. Taiju, despite the skills and personality he’d shown thus far couldn’t escape using his own skills and merits. It’s almost as if the writers get so hung up on writing specific solutions to their problems within the story that their mind gets stuck on a single track.

After this though, with Tsukasa absent from events, I started warming to the show a lot. With it purely focusing on Senku forging technology and winning over a small tribal village, it felt more like the show we were initially promised. Senku is using his knowledge of biology, chemistry and physics to sway, trick and manipulate people over to his side.

It was only when Asagiri showed up with the uncomfortable reminder that, not only was Tsukasa still a factor, but he seemingly used his clairvoyance to predict that Senku was still alive out there somewhere.

Honestly, had Dr. Stone continued down the path the first five episodes had been forging, I most likely would have stopped watching it. The episodes since have been a lot more fun and delivered on what I felt was the real promise of the series. By the time Tsukasa shows up again, I really hope the dynamic has changed enough that their battle can be a little more dynamic and a little less “your next line is…”

6 thoughts on “Dr. Stone – The Trouble with writing a show around smart character”