I had a bout of food poisoning a few weeks back and that threw my upload schedule all out of whack. Consequently, I missed a few Demon Slayer reviews. So I thought I’d make amends by going back and talking about the three as a group and my thoughts about the show’s new dynamic now that it isn’t solely focusing on Tanjiro and Nezuko.

Last time I spoke about this series, it has just introduced Zenitsu and was in the process of ingratiating Inosuke with the audience. Both characters came across as incredibly unlikable from their early interactions with our hero, but quickly showed their “worth” in different ways.

Zenitsu is a coward and crybaby whose sole motivating drive seems to be the brain between his legs, learning that Nezuko exists seems to give him levels of bravery he couldn’t come close to mustering during his initial appearance. Although his act of putting himself in harm’s way to defend Nezuko’s box (knowing a demon was inside (but not a cute girl)) let us know “this guy’s alright”. 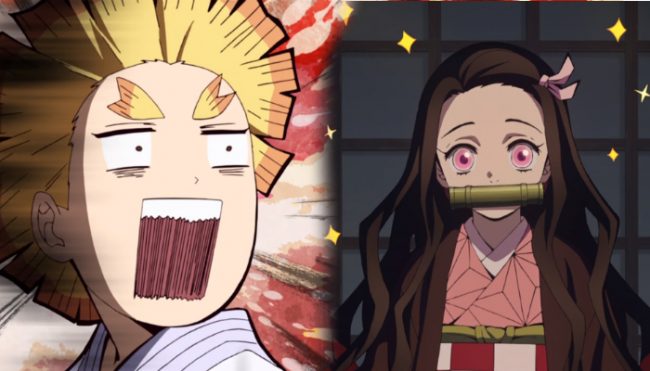 Inosuke on the other hand is a battle crazed lunatic who has little to no understanding of social etiquette or how to interact with another person outside of fighting them. So any form praise and positive reinforcement seems to work extra hard on him. Although he’d never let anyone else know that. He’s basically the tsundere of the show.

The growing dynamic between the three quickly becomes the new focus of the show, with Nezuko herself becoming less and less of a factor as events play out. Which is a shame, but honestly, the show hasn’t done a fat lot with her up until this point.

Deciding to make her a large cat instead of having any internal struggles regarding her contradictory nature as a demon that doesn’t consume humans. Having her be the cute mute who occasionally beats the crap out of things instead of a genuine character seems to be the niche she will remain in until the series ends.

Thus we find ourselves in the new status quo, where Tanjiro is the exasperated mom having to juggle two rowdy kids while also trying to do the daily chores. He becomes the straight man to the pair’s shenanigans, although that doesn’t mean he loses his moments to shine.

The new arc we come into has the trio responding to a call for help from a forest in which a family of demons are entangling slayers and forcing them to kill one another. Thus Tanjiro and Inosuke find themselves forced to fend off these half dead slayers while finding the puppet master controlling them.

Speaking of which, these past few arcs we’ve seen the demons perceived in a more sympathetic light. While the drum demon previously did some bad stuff, his death bed repentance made it seem like his situation wasn’t entirely his own fault. Something I never really bought, on account of all the murder. 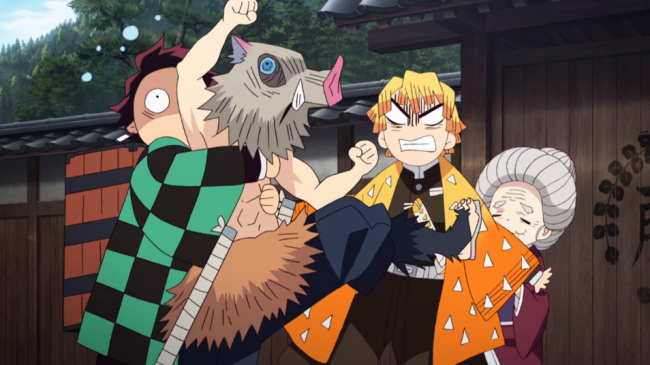 This “mother” who is controlling all of the slayers on the other hand seems to be doing everything out of the fear of what “father” might do to her. It shows her as a victim of abuse, being punished for slights she herself doesn’t understand. In the end though, these are all demons, and they do evil stuff for no reason.

For the sake of this story though, we’re supposed to feel bad for her, and so does Tanjiro. He gives her a painless execution when he realises she meets death with a sense of relief, welcoming an end to it all.

Which is part of the reason I love Tanjiro so much as a protagonist.

You might want to call me basic for this, but as I’ve stated before in other articles on this sight; I really love heroic characters, the white knight archetype that always knows right from wrong and has a strong moral core. Adding a dark backstory or edge to a character feels like a cheap way of making them more interesting (sorry Batman), Tanjiro is the best boy and Demon Slayer handles him amazingly. When Tanjiro gets angry and attacks Inosuke at the beginning of this run of episodes, it feels all the more impactful, because we know his rage is all the more meaningful.

Being a more measured and mature character, he isn’t easily flustered. So seeing his quiet rage at the slayers being pointlessly murdered by “mother” gives a real sense of this being serious. A rage that can only be quelled by his overwhelming kindness.

Which is Tanjiro’s most admirable character trait. Despite the anger at the loss of so much life, he immediately picks up and sympathises with the Mother’s situation, and acts accordingly. I know it runs the risk of making Tanjiro into a very bland main character, but the events are executed so well and in such an unsubtle way that I can’t help but appreciate it. 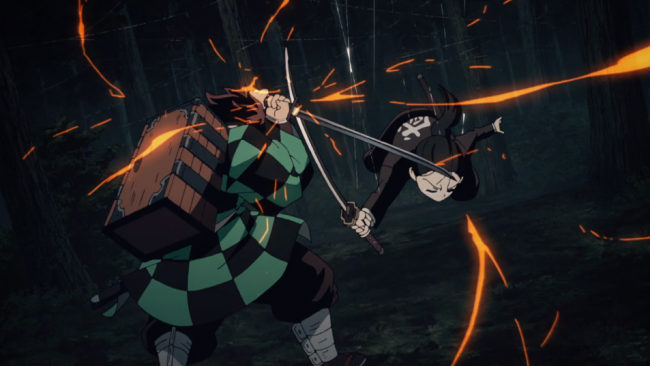 The episode ends with Mother dying and warning that “father” is one of the Twelve Moons. And they have the three kids to worry about too. After leaving Tokyo, the show seemed to be less about Tanjiro’s revenge and curing Nezuko and more of a series of action sequences.

It seems strange for Tanjiro to meet the series’ main villain so early and then kind of walk away from the situation without so much as mentioning his unfinished business. Nonetheless, I am still enjoying this show a lot, but since introducing Zenitsu and Inosuke, it seems to have lost direction slightly. Tanjiro is just being lead from place to place and his core goal seems to have been brushed under the rug until it becomes relevant again.

I’m used to this genre meandering and losing direction for a while, so it’s not that bothersome, but considering how fast this show started, it really does seem to be coasting for now after running out space to climb.