Back when I was reviewing the first half of this season of Attack on Titan, I’d often complain on how little titan action there was. I was half joking, as the political intrigue and dive into the lore of the world was equally fascinating to me.

I can only imagine that in some bizarre timeline, someone making this show heard me, because the first three episodes of part two kick off with a number of titan sized bangs.

With the seat of leadership finally secured and some stability in place back in the capital, the Scout Division can finally get back to doing what it is they do best: getting mercilessly slaughtered by titans. 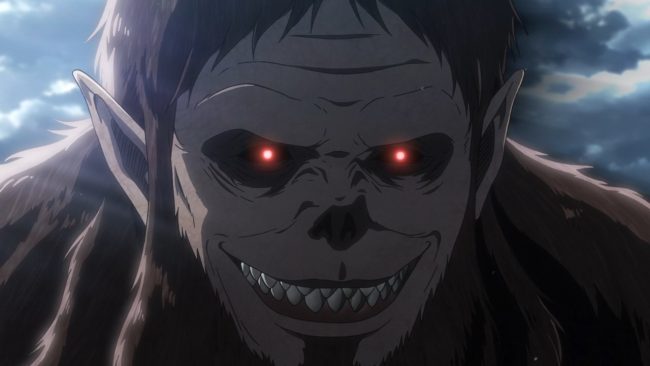 But before we get to that, Erwin leads the Survey Corps out to the Shinganshina District with the goal of retaking it. Not just that, but we’re finally getting to see what the hell is in that basement that’s been lingering over everyone’s heads since the series began.

Despite only being a handful of episodes into this second half of the series, everything about these few episodes screams finale to me. All of the mysteries and story hooks that have been dangling since the anime’s explosive first few episodes feel like they’re on the verge of being tied up.

Thanks to the revelations of Reiner and Bertolt, we all but know the broad history of the titans themselves, and the mindless titans that were all so terrifying at the series beginnings feel all but fodder in the face of the human controlled titans that now represent the major antagonists of the series.

As the Corps arrive at the walled district, they’re immediately suspicious of a trap. With good reason too, because a trap is exactly what it waiting them. Luckily, thanks to some outside of the box thinking from Armin, they root Reiner out of his hiding place inside the walls and force him into a battle on their terms.

Everything about these episodes has been oddly calculating. For a series about a war with chaotic beings of destruction, there’s a constant struggle to figure out who has the tactical upper hand as Erwin and the Beast titan stare one another out during which time Erin finally seem to have gotten his shit together and once again bests Reiner in combat.

Knocking the armoured titan to his knees before the rest of the corps use their new lightning lance weaponry; rocked powered explosive stakes. They say these things are specifically designed to take out human titans, but they seem like they could take out pretty much anything given the circumstances.

As episode 53 ends, what feels like a final confrontation with the Colossal Titan is poised. Bertolt’s personal weakness have finally been overcome, and he seems resolute in his mission to kill all of the humans living within the walled cities, even if he doesn’t seem that happy about it.

it seems like there is no option for our heroes but to deal with him once and for all. And with the Colossal Titan being the the face of the franchise it’s difficult to think about this as anything but a culmination of events.

Even though there is a huge open world of mystery out there for humanity behind the walls to contend with. But if they do take the colossal titan down here, steal his power and finally crack open that basement, Attack on Titan is poised to move into a totally new era, with all the story hooks poised in the series roots finally coming to a head.