If there was one thing I have picked up on from the online anime community when it comes to the Isekai genre; it’s that there are far too many Isekai shows out there are the moment. I can kind see why too, just browsing through the recent updates on Crunchyroll, the number of them I can spot is more than a modest amount to say the least. It might be this bias that has subconsciously caused me to avoid the genre for the past 12 months. 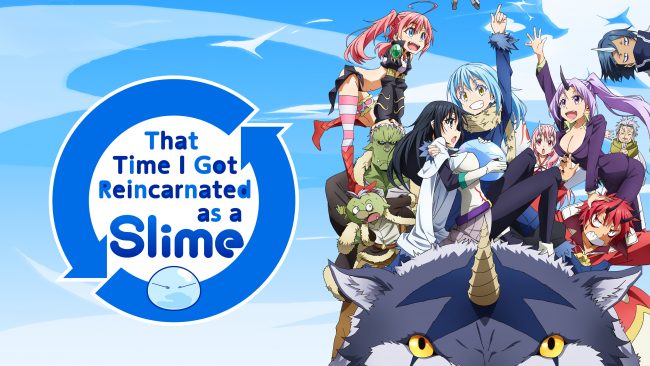 For those of you who don’t know what I mean by “Isekai”, it’s basically a translation of “different world”, and is the type of show where a protagonist from the “real world” is transported into a fantasy world, or a video game, or their favourite manga. In almost all cases though, while also being in a fantastical (and often hostile) world, they have some kind of advantage over the rest of the people in the world. Be it their more modern knowledge, access to technology from their own world or they’re simply ungodly powerful.

I eventually decided to give one of these shows a chance, seeing as it was one I had been hearing some good things about. The overly long titled: That Time I Got Reincarnated as a Slime, helpfully describes the jist of the story in its title, which saves me a job. The main character is a single, frustrated office worker in his early 30s, who get stabbed for no real reason as he defends his coworkers from a man just running through the streets with a knife. When he wakes up, he has been reincarnated into the body of a small blue slime.

I watched the first nine or ten episodes, pretty much enjoying what I was seeing, but as the show marched on I started to notice something. The power fantasy aspect of the show, which is entirely the point of the genre I’d imagine, just seems to be taking the excitement out of the events. The longer the show goes on, the more powerful the protagonist becomes as he absorbs things into his body and gains their traits.

By the time we arrive at episode 9 and have a first major encounter with a powerful fire spirit. However the tension is sucked out of the scene then the slime realises that there is nothing the creature can do to damage him, all thanks to the ever expanding array of abilities he’s gained in his short time in this fantasy world. He himself describes the fight as easy mode. It was at this point where I started to wonder if this totally vanilla protagonist was going to experience any adversity whatsoever, or even cause any. 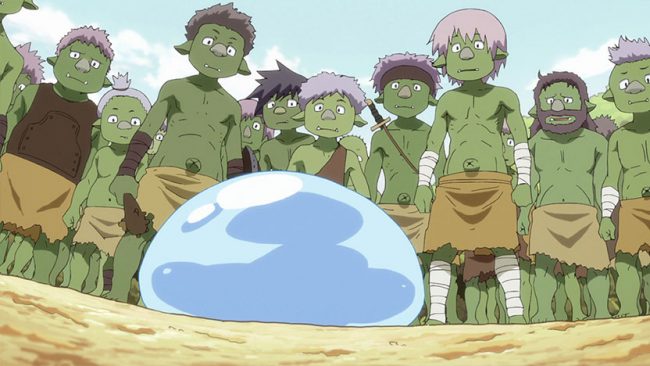 Sure, the events on screen are engaging. The characters are likeable and its goofy nature has me smiling. But the show lacks any adversity, no drama, everything seems to fall into the protagonist’s “lap” without him so much as having to try. It feels like a thought experiment in what a decent human being do in this situation, and watching everything go right for a person is kind of boring. It’s like playing a video game you’ve played so much that you can do it in your sleep, only without any feel of gratification.

There was a point where our hero Rimuru, discovered there was a nearby tavern run by a group of female elves. Being a real dude, he immediately starts to imagine a group of busty, scantily clad anime elf girls. In fact, he does this a number of times leading up to actually visiting the place. So much so that I thought the show was trying to lead me into a false sense of security and there would be some hilarious payoff as things didn’t go how our protagonist expected. 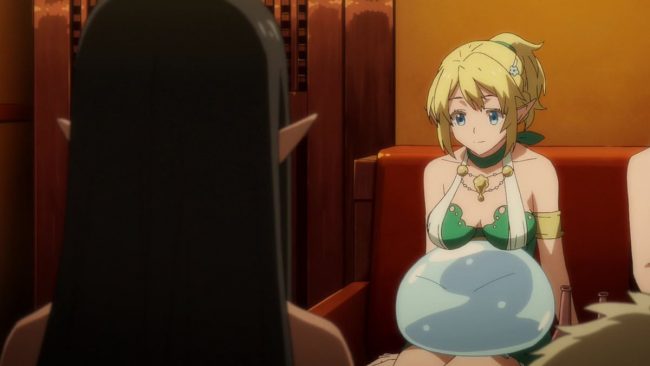 We arrive at the tavern and its filled with attractive elf ladies who all fight to press the little slime into their ample boobies. It all played out exactly as he had hoped… which is boring. Looking forward, it seems like Rimuru’s ever expanding harem of hot demons, cute goblin girls and other manner of overpowered monsters will continue to grow. Maybe he will eventually face some trials and hardships by the time the series comes to an end, but I’ve watched about half the series so far and I’ve not seen speck of anything bad happening that Rimuru himself couldn’t get out of with minimal effort.

Even the love interest he meets welcomes death with open arms and gives Rimuru yet another power boost as a result. Having an protagonist go through hardships of some kind is a fundamental tenant of storytelling. And while cursory hand waves are thrown in the direction of slowing down our heroes snowballing progress to being all-powerful, The tone of the show has never filled me with any kind of uncertainty that he won’t succeed. As he doesn’t ever really seem to give the impression that he genuinely concerned, as summed by the show’s nonchalant title; “That Time…”

In short, the show’s boring, and no amount of boobs and power fantasy can make up for that.