Original plan was to get this up on Halloween itself, but you know me, I’m really not very good with deadlines at the moment. Rather than boil this down a shorter, condensed review, I realised there was more to unpack here than perhaps a quick review could cover. Watching the latest instalment/reboot of the Halloween franchise, I wonder if the slasher genre can exist anymore without being self aware.

Halloween 2018 is yet another reinvention of the Halloween franchise, this time ignoring all of the movies that came before it except the very first one. In this movie, set 40 years after the killing spree of Michael Myers in Haddonfield, two journalists travel to the U.S. to investigate the murders for their “award winning podcast”.

Michael is getting moved to a new, higher security mental institution, which will supposedly keep him from having any contact with the outside world ever again. Meanwhile we’re reintroduced to Laurie Strode, the role reprised by Jamie Lee Curtis. She lives in a fenced off cabin in the middle of the woods, displaying obvious mental health problems including alcoholism, extreme paranoia and an almost doomsday prepper mentality to Michael eventually escaping.

Which he obviously does. 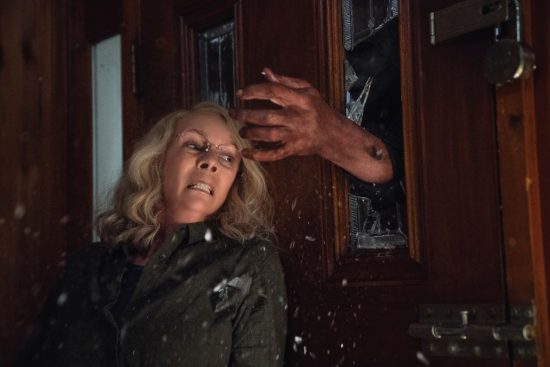 There are several through lines following characters within the movie, which all come together by the end. They focus on the three main members of the Strode family; Laurie herself, who has become almost militaristic in her approach to life, training herself in combat and firearms.

Her adult daughter Karen, played by Judy Greer, who resents her mother for bringing her up in a environment of fear and paranoia. Finally there is Allyson; Laurie’s granddaughter who fills the role that parallels the one Laurie herself filled in the original movie.

As Michael escapes and begins killing people around Haddonfield again, Laurie puts the plan into action she had been preparing for 40 years. Thus the movie begins to subvert and play with its own genre tropes. Introducing a new doctor who is obsessed with diagnosing Michael, Laurie even utters a line stating that “he’s the new Lumis”. 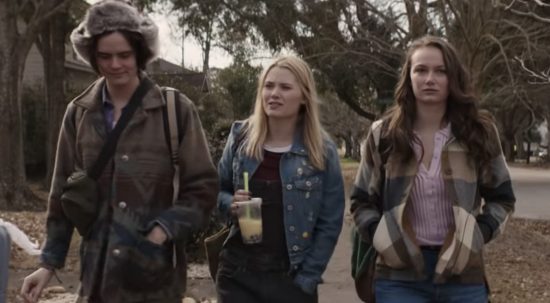 The Audience Being in on it

The movie begins to draw more parallels between Michael and Laurie as it goes on. Allowing Laurie herself to display increasing amounts of “slasher killer” powers such as vanishing out of plain sight and silents emerging from the shadows behind people. In the movie’s third act, there is a typically slasher movie scene in which Laurie is moving around her own house with a gun, locking down individual rooms in search of Michael.

He inevitably gets he jump on her and after a brief struggle, she is thrown from a window. As Michael looks down on her, almost triumphant, a sound distracts him momentarily. When he looks back, Laurie’s body has vanished, accompanied by an iconic music cue that would traditionally accompany him performing such an act.

Suddenly, focus changes. Michael is now the character we follow. As he wanders the house knowing Laurie is stalking around silently, waiting for the opportune time to emerge and strike. Which she does in a brilliant moment that had the cinema laughing in glee.

They laughed. At a Horror movie.

It’s the inevitable thing that comes with making a slasher movie in 2018, especially one in the Halloween franchise. There has always been something pulpy about the genre. People look back at the 80s and the popular era of the slasher genre with such fondness, but with the end of the 80s, the genre fell out of fashion.

It still existed, but returned to the cult and budget status that it original came from. Those movies that managed to breakthrough into mainstream success always did so through parody, self awareness and playing to an audience that knew the tropes.

Scream came out in 1996 and was already overtly poking fun at the genre. In the 20-odd years since then, slasher horror has continued this trend. While horror is the darling of the indie/budget director, with no shortage of either self-serious or self-irrelivent movies being made, very few of them breakthrough into the mainstream.

Those that did continued the trend of using the slasher genre with a knowing wink and a nod, bucking trends. The Final Destination franchise removed a corporal killer altogether, and 2016’s Cabin in the Woods was a meta commentary on horror tropes in the form of a horror movie. Slasher horror has since splintered off into many sub-genres since, leaving the traditional slasher in the position we find it in today.

The most high profile pure slasher film of recent years I can remember is, funnily enough, Rob Zombie’s reimagining of the franchise from 2007. This movie did play itself pretty straight within the genre, but of horror within came from the brutality of the events within. Being violent for violence’s sake and diving into Michael’s character to try and justify his actions to some degree.

It’s something that’s popped up thanks to more modern cinema going sensibilities. It’s not enough that Michael Myers be a being of pure evil and chaos, we don’t seem to want to accept that he is just evil for evil’s sake.

I found myself doing it throughout the movie. Within this version of Halloween, Michael is not a mindless killer, an unstoppable force that shrugs off any attempt to stop him. He is a keenly intelligent and manipulative serial killer. He takes time and effort to leave bodies to be found as distractions, or simply to screw with whoever finds them.

He sets traps and avoids situations in which he could get himself killed. Despite knowing that Judy Greer’s had a rifle trained on a doorway, he didn’t step into the open until she put on a show of not being strong enough to take him out like her mother had trained her. Michael is not stupid, and because he’s not stupid I found myself wondering what was going through his mind.

Compared to the year 1978, we have a much stronger understanding of mental health and illness. The thought that a human being could be just irredeemably evil doesn’t hold water any longer. Not that I can’t accept a character in a movie as being pure evil, but like I said, the thought crossed my mind and I couldn’t help but wonder.

It means we can’t make a movie like the original Halloween and have it be as simplistic as it was. Don’t get me wrong, there was no shortage of brilliant film making behind the movie, but it’s premise was as thin as movie plots got.

This 40 years later follow up is much fleshier by comparison. It’s still just about a masked killed, but it’s self reflective nature makes it something slightly more. Could it have been a straighter sequel? Sure, that’s pretty much what the Rob Zombie Halloween was.

2018’s Halloween is as much a love letter to Jamie Lee Curtis and how we’ve changed our perceptions going into horror in the near century since the original.

One thought on “A Late Halloween: Is it possible to make a modern slasher that isn’t self reflective”