I spoke last week about how I was frustrated by anime latching itself onto the tired trope of bloodlines being the all important factor in why things happen. Historia being the one who carries the Reiss bloodline, thus is capable of knowing the true history of the Titans. I liked that she turned her back on that.

Although I wouldn’t be too shocked if Erin end up accessing the memories and abilities anyway through some upcoming plot contrivance.

The episode “Wish” is broken up into two parts. One details the battle between Levi Squad and Kenny’s mercenary group in the cave of wonders, as the former assault the location to retrieve Erin. The second is the revelation of Historia’s part to play in the Reiss plot to return the walled cities to their status quo and how badly Erin’s dad stirred the pot when he killed her sister and took her power years previously.

The first part is the hot slice of action I’d desperately needed after X episodes of Star Wars prequel depth of political intrigue. It’s fast paced, smart and incredibly animated. Despite the superior numbers, Kenny’s Merc’s get torn apart by the superior strategy of Levi Squad, who exploit the main weaknesses of their weaponry.

The only casualty is Hange, who, in a moment of recklessness gets herself shot in the shoulder by a grappling hook and slammed into a pillar. This gives the mercs time to fall back and regroup. I’d be worried, but this show is gruesome enough that that little shoulder wound will do little but slow her down.

The second half of the episode is good stuff too, despite the fact that it’s mostly just more vocal revelations. Kenny, who seemingly planned on betraying the Reiss family to take the titan abilities from Erin himself, is unhappy to learn only a Reiss can gain full access to the powers. So in a tantrum, he cuts Erin’s head and attempts to have him and a titanified Historia battle to see who is worthy to live.

After learning that his dad was responsible for essentially allowing the titans to run rampart throughout the city walls, and then consequently cause the deaths of a huge number of people, Erin breaks down and begs Historia to just kill him. 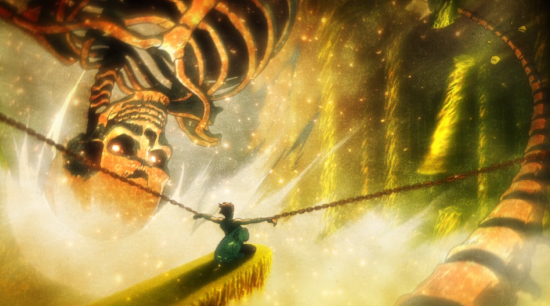 It’s the right decision to make from Erin’s point of view. If Histoia can stop the needless deaths, even at the expense of the freedom of humanity behind the walls, then she should to stop titan’s rampages.

Historia rejects this offer to return the world to the status quo and smashes the titan serum after remembering the words of Ymir, then she goes to free Erin. The episode ends with her dad licking up the puddle of serum and becoming a titan himself.

It’s a good cliffhanger. Erin still bugs me, but taking responsibility for the actions of his father was pretty mature of him. Next time we finally get some giant naked monster brawling.