This piece of my half baked opinion. I’m not a pro. I’m no expert. I’m just a person who plays a video game to have fun, as bizarre a concept as that may seem, especially to a lot of the Overwatch fan base. These are my opinions based around playing Overwatch as a source of enjoyment and nothing else. So chill.

I mean, if you ask me real nice. I probably will still play Mercy. On occasion I will also take leave of my senses and just pick her when she feels like the best available pick. I guess I probably should have just called this piece “A breakdown of why Mercy isn’t fun to play for me”, but that doesn’t seem anywhere near as strong clickbait as what I’ve already got. For those of you who don’t know, the less “friendly” section of the Overwatch fanbase will get pretty triggered from reading that title up there. Because how dare the support player refuse to play the only healer worth playing.

But that’s the thing, I don’t consider myself a support main, I’d say I’m a flex player. I can play three quarters of the game’s heroes to a pretty strong standard. But because I always wait till last to see which roles need to be filled in, I’d say I end up playing healer or tank 19 games out of 20. Getting to play DPS in a game that isn’t a lost cause is a rare treat. At the level I’m currently playing at, which is the border between gold and platinum. Nobody else seems willing to play the less desirable, team orientated roles. Hell, a lot of games I play don’t have people willing to work as a team at all. As a person who solo queues in competitive almost exclusively, the vast majority of games see people insta-locking lone wolf type characters like Genji, Reaper and Hanzo.

I get the feeling this post is going to toe the line of simply being me complaining about other players in Overwatch, which isn’t what I want it to be. Not exclusively anyway. So I’ll bring it back to the point. What I’m trying to get at is that I have spent a lot of time healing in Overwatch. And for a long time, the staple healer of the game, the bread and butter reliable healer also happened to be a character I have come to despise playing.

Mercy has been a really contentious character throughout the game’s run since it came out in May of 2016. She’s probably received the most significant re-working of any of the heroes in the game’s roster, changes which have been  further amended several times since. She even has more changes on the horizon, because she she feels too… required I guess. 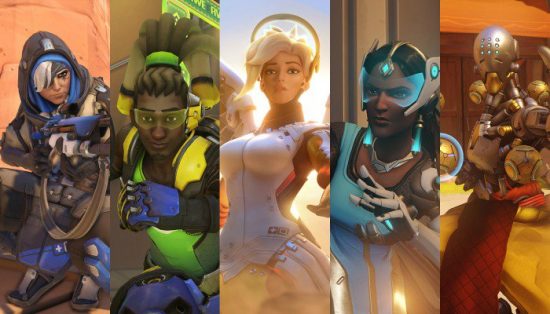 The main issue with her is that for a long time, she was almost a unavoidable pick on all teams, she had the strongest, most reliable healing. She has decent surviveability and manoeuvrability, depending on the situation, and her Resurrection is a game changer. Back when it was her ultimate ability, games were won and lost on big rezzes. And while that might have seemed liked a great heroic moment for the Mercy player in that situation, the reality of it involved removing yourself from the action and allowing your team to die, just so you could swoop in and get the big revive. Much to the ire of the enemy team, and often your own team because you didn’t get a 5 men rez and only managed to get 3 of them.

The Big Rez ultimate was eventually removed because it wasn’t fun in most cases for anyone involved. Most fights revolved around who had their Rez and ensuring you got that Mercy before you killed anyone else. Even then, having three people on the enemy team come back to life can be hugely demoralising when you and your team managed to combine ultimates and get a team wipe. A well played, coordinated attack between two or three people on a team should be enough to reward the payers with some breathing space, but then with the tap of two simple buttons, all that work was undone. What’s the point.

Even after her revive was moved to a normal ability that could only bring one person back per 30 seconds, her revives were still a huge part of her game. To the point that she has had to have her single rez nerfed more than once.

If we ignore all those balance issues and take them off table though, my personal big issue with playing Mercy is that she is just too passive. It’s really difficult to have a proactive impact on the game when playing her, unless you go “battle mercy”, and which point you might as well not be playing her at all.

You’re left entirely in the hands of your teammates, and if you’re not playing in an especially cohesive unit that doesn’t want to stay in at least in your eye line, it can be a complete nightmare. One you end up getting blamed for despite it being out of your power to do anything about aside from just moaning back at them. Ideally, you want your team to stick close to one another so you have avenues for mobility. I’m not going to turn this into a dps bashing session, but if you’re across the map and behind three of the enemy, I don’t know how you can expect the healer help you when they’re huddled behind the tank who, themselves, are slowly getting whittled down.

But. Even if the team does work well together, if everyone fills their roles flawlessly, playing Mercy still isn’t fun. In a game where things are going well. As Mercy, I generally find myself flitting from teammate to teammate and hold right trigger in their general vicinity to top up their health (I’m a console scrub, I don’t care about your opinion of this), then occasionally you’ll hold the other trigger to damage boost the DPS in the best strategic position. You occasionally use your revive on your tank or the lucky bastard who go to play Zen as second healer. Then, if the enemy makes a big push you use your ult and float around for a while, holding down a combination of two buttons.

So maybe you start to see my issue with her. Playing Mercy can range from being wildly frustrating when you’re up against a decent Genji or Tracer who make it their life’s mission to camp spawn and focus on you over and over. Or it’s boring as you just holding a button while facing someone to top them up. It’s difficult to feel like an active participant in the game even when there is no healing to do your best option is to give someone else a damage boost, so they can have more fun. I swear, a few times we’ve been winning games so easily, and my team mates still berate me for pulling out Mercy’s gun and trying to get a cheeky pick.

It doesn’t help that people refuse to have support like Zenyatta or Lucio act as a solo healer, the later of which can work really well on king of the hill and escort maps. It’s this ingrained thing in people’s minds that there “needs” to be a Mercy in the team. I mean, there are a few people out there who do enjoy Mercy, but I can only imagine they’re people who like coasting through games. Allowing the rest of the team around them to carry you to victory. That might seem harsh, but I feel like Mercy’s skill ceiling is very low. By that I mean playing her as well as possible takes much less skill than the more impactful heroes in the game. Anyone can play her relativity well. It’s why you see a lot of Mercy one tricks make their way up to Masters, when they’re probably only a low Diamond player in reality. It’s why that, when I came back to Overwatch after a break recently and got my hands on Moira I found a renewed interest in playing Overwtach.

And that’s not me being salty, it’s just the way it works.

Mercy is part of the reason I took a break from Overwatch, it was the inclusion of a new support hero; Moira, that got me back into playing and enjoying competitive Overwatch. Moira is a type of character I enjoy playing much more than Mercy. For one, she can attack and thus defend herself. Which isn’t to say I pick her and play pretend DPS for the rest of the match. But when everyone around me is topped up, I have the option to do something constructive, like take down their Mercy or their god damn Genji (seriously, killing Genji gives me life.) On top of this, her two orb abilities have the potential to be hugely impactful on both attack and defence if used intelligently.

It means that while you’re healing or attacking, you have to think about your surroundings, and how you can use the abilities at your disposal in creative ways. She is a character who actually rewards creative thinking and quick decision making. It’s also nice to be able to see yourself with a gold or silver medal in kills. That isn’t me trying to brag by the way, the nature of her orb ability means it does a little bit of damage to a lot of different people. And the enclosed natures of some of the maps means that you can keep hitting people over and over. It’s when I get gold damage that I worry.

I’ve played more of Moira this competitive season than any other hero. People have complained that Moira is too strong of a character, when in reality she is a Mercy done right. Her healing abilities are powerful, but she also has the capacity to do damage to the enemy team, bottleneck their progress and nullify their ults at times. So, to summarise, I won’t play Mercy anymore. Why? Because I love playing Moira so much more.