So the elephant in the room has come and gone, and it didn’t make it into the top four. So I’m out if the woods right? no backlash? Alright, then let’s surge on and get on with it. So, Recap first as usual.

#9 Ori and the Blind Forest

#4 Tales from the Borderlands

While technically starting in 2014, Tales from the Borderlands took 11 long months to come out in its entirety, finally releasing its final part this past October. Was it worth the wait? Hell yes it was. Telltale redefined the genre when they made season 1 of the the Walking Dead, turing adventure games on their head by making a very heavily story focused game.

The Walking Dead was a fantastic game, both engaging and devestating. Ending with a massive gut punch. One thing that did bother me about it was that while the game gave players the illusion of choice throughout, it was ultimately all flavour and large parts of the story played out the same way regardless.

But I’m not here to talk about the Walking Dead. Tales of the Borderlands was a game, that by every account, probably shouldn’t have come about. A action based first person shooter getting turned into a character driven adventure game? It’s hard to think how it would have worked, but it did and in a big way. It was by far the best story I experienced in a video game all year.

The game is funny, like really funny. The characters are all likeable, which surprising considering the reputation Borderlands has for being a game that rides the coat tails of internet Meme humour. But that has never been all that there was to this series. Borderlands 2 was one of my favourite games of the last console generation, and while there was a lot of the referential stuff in there, the characters were all unique, mold-breaking and seemed pretty real, which is strange considering the absurd world they inhabit.

Tales from the Borderlands takes that same type of mentality and runs with it, making a story that seems like it was cut out of one of the action games. It isn’t a side story, it feels like the natural progression of Borderlands 2, and is a story worth taking in if you’re a fan of the other games in the series. Things happen, important and terrible things that will have a big impact on Borderlands 3 (if that ever happens).

The game’s two main character are both great. Rhy and Fiona are two very different people who act as both unreliable narrators, but also as each other’s foils. Much of the game it told through a wrap around segment. So parts of the story get changed depending on who is telling it, before the other shuts them down, throws them under the bus and shows us how it really went down. It’s a game I find difficult to talk about in too much detail because there were so many fantastic character interactions, action set pieces and absurd moments and I don’t want to ruin any of them. I’l just say that the game has a ton of heart to its story and characters, and while it can get incredibly dark and grim one minute, it’ll go back to being laugh out loud hilarious the next.

The one thing I will say is that Telltale managed to do what they have never done in previous games and made it so your choices and the “<person> will remember that” prompts do actually amount to something during the game’s finale. Some choices that might seem innocuous at the time end up having an impact on the final act of the story. And while it doesn’t nessesery affect how the game ends, it makes the final battle very different depending who still likes you and who you made into an enemy. 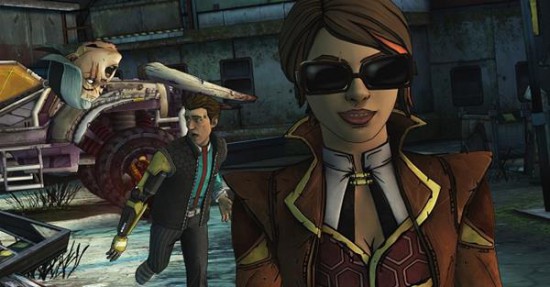 My one big criticism of the game was that during said final confrontation, in parts where it was obvious the game had to load a specific action scene depending on my choices, the framerate took a nosedive. And I’m not talking about some chugging, I mean it was like literally watching a slideshow. It was a shame because, they did everything else so well, it didn’t ruin what was otherwise a fantastic experience, but still.

I’d recommend the game for the amazingly produced musical introductions to each part alone, but Tales from the Borderlands has so much more to provide. It’s a great character piece, with a great cast both and and new to the series. It’s both funny and touching, and the best thing Telltale have produced in my opinion. Now the whole thing is out, I’d say everyone out there should go and play it, fan of the series or not.