I knew we wouldn’t be getting to Ahsoka right away. They’re always going to hold that reveal off for as long as they possibly can. So, what we get here feels like something of a transitional episode. In it; Din Djarin and the Child return to Nevarro and catch up with some of our favourite characters from season 1.

After the events of the previous couple of episodes, Din’s ship is still in pretty bad shape. The Mon Cal on Trask only did so much to repair the rust bucket and thus Din is forced to return to Nevarro to get some repairs. While there we get to see how the planet has totally turned around under the leadership of Greef Karga and the new marshal Cara Dune, both played by the returning Carl Weathers and Gina Carano.

What came as a surprise to me is that as a part of his agreement to come on board for the Mandalorian, Carl Weather requested he be given the opportunity to direct some episodes in the second season. This episode is one of them.

Very quickly, we get to see how much nicer the planet is now that the Imperial presence has been reduced. Also, that unnamed Mythrol, who served as Din’s first bounty target in the first episode, is now Greef’s personal assistant. And is the resident comic source of comic relief for the duration of this episode. Well, I say that… Din offers to help his old friends with a problem they’ve been having in return for the repairs to his ship. Which means that the Child is dumped off in a school that has been put into what used to be the Bounty Hunter’s cantina.

I said the Mythrol is the comic relief for this episode, but after getting dropped off in this school, we get an extended scene featuring Baby Yoda. He’s plopped into a seat in this classroom and his immediate obsession with food leads to him trying to get some horrendously unappetising coloured macaroons from one of his classmates. Who wants nothing to do with this little green baby. It’s cute, and the Child ends up snatching them away using the force anyway.

Maybe the scene is there an apology for the Child once again being dumped off somewhere and hardly featuring in the remainder of the episode that follows.

The mission, as Greef explains is, it to clear out on old forward operating base, which is playing host to some of the final remaining presence’s of the Imperial Remnant on the Nevarro. The plan is to drive out there, overload the reactor and bug out, leaving the skeleton crew of Stormtroopers to figure out for themselves how they want to live or die. After arriving at the base, the crew turns out to be far less skeletal than they were expecting.

The infiltration sequence that follows seems be calling back to the Death Star scenes from A New Hope. The interior of the base looks very reminiscent of the corridors of the space station, filled with the same incompetent Stormtroopers to boot. After overloading the reactor, the gang stumble upon a lab. It’s there they realise that this wasn’t a regular base at all, but a science facility. Specifically, one that was both studying and conducting some rather horrific experiments involving the blood they’d collected from the Child during the brief time they held him.

Suddenly realising that the Imperial Remnant is still very interested in the Child, Din bugs out. Using his Jetpack to rush back to town while leaving the other characters to escape on their own. At which point Cara, Greef and the unnamed Mythrol become the main characters of the episode. I think this might be the most extended period of time in the show we’ve had without the titular Mandalorian being on screen.

Which doesn’t bother me. Greef and Care have ingratiated themselves to me enough that I’m more than happy to let them carry me through an episode. Plus, their explosive escape from the base is a ton of fun. Leading to a chase through the canyons involving a stolen tank and Stormtroopers on speeder bikes in pursuit. Which are then followed by some Tie Fighters. All building up to Din showing up again at a dramatic last minute to save them in his repaired ship.

It’s a fun action chase sequence which feels like it has as many homages to Indiana Jones as much as it does the older Star Wars movies.

In the end, Din thanks Greef for the repairs and leaves right away to get the Child where he needs to be. And yet, we don’t follow Din, we stay on Nevarro. Skipping forward to New Republic Captain Carson Teva questioning Greef and Cara about what happened, all while they stay tight-lipped about their and Din’s involvement in the Imperial base exploding. It’s a nice reminder that this all takes place on the lawless outer rim, where The Republic doesn’t have much of a hold of the more wild west approach to living people have. 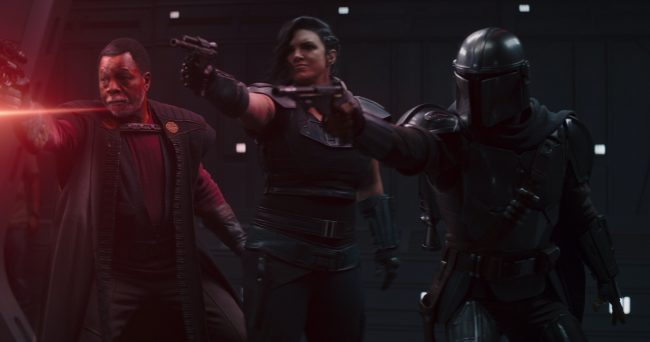 Before he leaves though, Teva gives us a little more insight into Cara Dune. Telling us that she was born on Alderaan, and how she lost everyone  with its destruction nine years prior. Teva asks het to join the New Republic, saying they need people like her. Despite being an impassioned fighter for the Rebellion during the Galactic Civil War, she doesn’t seem to want anything to do with this new galactic government. She seems content to remain on the outer rim, keeping her do-gooding on a smaller scale, where the individual can see some benefit. I mean, that’s what I assume anyway.

The final moments of the episode reveal that one of the engineers who repaired Din’s ship placed a tracking device onto it for the Imperial Remnant, with Moff Gideon being informed of this before looking over a rack of armoured figures, saying that they’ll be prepared to retrieve the Child next time.

The going theory about these armoured forms is that they might be the new canon’s reimaging of the Empire’s Dark Troopers. Advanced Battle Droids developed by the Empire that were individually more than a match for platoons of Rebel Troops and even a difficult challenge for a Jedi. Although ultimately nothing Kyle Katarn couldn’t deal with.

While most of the Dark Troopers were droids, some of the also doubled up as powered exo-suits. Which is what I originally thought they were when watching this episode. Either way though, I look forward to seeing them in action and wonder if they’re going to be the fodder that forces Ahsoka to spring into action when we eventually meet her.

This was a pretty action/adventure heavy episode, and another that felt almost transitional, moving us between the episodes that introduce important characters and add to the greater Star Wars Lore. I enjoyed it all in all. It was nice seeing Carl Weathers and Gina Carano return, and I hope they continue to have an increasing role in the series as it goes forward.

2 thoughts on “The Mandalorian Season 2 Review – Episode 4: The Siege”