New to this series? Why not start by reading my preamble to my goal with this series of articles. Maybe go back and read my Iron Man Post.

It’s inherently difficult to portray the Incredible Hulk on screen and actually create something fun out of the experience. At its core, the story of Bruce Banner/The Hulk is an inherently tragic one, with both the Hulk and Banner trapped by their condition and a desperate search to end everything once and for all. But that doesn’t mean there haven’t been decades of comic books that done lighthearted, entertaining things with the character.

There is humanity to the Hulk, which is integral to his character in the comics. Something the movies struggled to capture before Mark Ruffalo took over the role. Older movies chose to focus on the inherent monstrous nature of the Hulk and Banner’s ongoing journey to never change into him. 90s minutes of watching someone try not to do something ends up making for some pretty tedious viewing.

Going back and watching 2008’s The Incredible Hulk, might be the most obligatory entry I make on this list. It’s pretty obvious from beginning that this movie was never made with any grand scheme, regarding a future shared universe, in mind. It was released within months of Iron Man and it’s painfully obvious that everything within the movie that does connect it to Iron Man was included after the fact.

All references to Stark Industries, Nick Fury and Shield are edited into visual montages, off-screen voice overs and and onto computer monitors which could be showing anything. To double down on this, it’s quickly apparent that this movie takes far more inspiration the Bill Bixby/Lou Ferrigno Hulk television show from the late 1970s than it does the character’s source material.

Homages to the old show are rife, including use of the Lonely Man theme, the use of “David Banner” as an alias, a clip from an old Bill Bixby show and another cameo from Lou Ferrigno. Had it not been for the fleeting references, an obvious last minute cameo from Robert Downy Jr. and William Hurt’s inclusion in later movies, then I’d have argued this isn’t an MCU movie at all. (It technically isn’t).

What might be the best thing about this movie is, the more I thought about it, the more it made me appreciate Marvel Studios being able to take this character and shine an entirely new light on it by the time he shows up again, to make the character anything but a horrifying monster.

My main problem with both this movie and the Ang Lee Hulk from 2003 is that they’re joyless movies; taking the thrills and excitement of a superhero flick, and replacing them with horror and dread. There is a deleted opening from the movie in the Blu-Ray that features Bruce Banner travelling to the frigid north in order to commit suicide. It’s just depressing.

Throughout the movie, Banner is treated like a ticking clock, doing everything he can to suppress the Hulk while slowly working on a way to cure himself. Large portions of this movie feature the main character acting mild mannered in the extreme, denying himself any pleasures whatsoever and showing little dynamism unless it’s forced upon him.

A stark contrast to the lead of the previous movie in the series… heh.

But then you move onto the Hulk himself who is certainly a character capable of being dynamic. The problem is, every time he is on screen, we’re watching him throwing the the American military around like they’re dolls and ripping apart their artillery like it’s cotton wool. It’s more horrifying than entertaining. 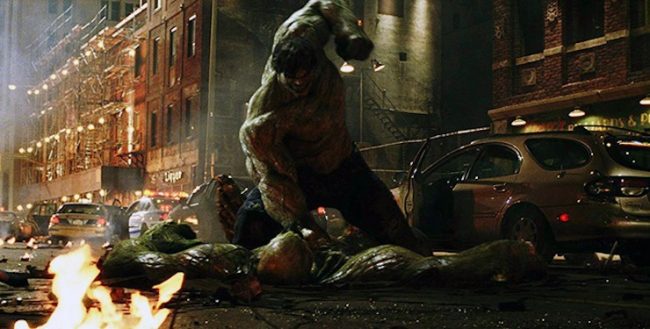 It’s been a long time belief of mine that the Hulk can’t carry his own movie. This is a perfect example of why. I can’t root for Banner, I can’t root for the Hulk. They’re treated like monsters and while we get plenty of opportunities to feel sorry for them and the situation they’re in throughout. They ultimately are monsters in the way the movie portrays them

The Hulk never seems to be genuinely threatened, there is no vulnerability to him, nor is there to Banner, who can turn into an indestructible monster whenever he is threatened. It’s not until later on, when the Hulk is put up against people more on his level that we can start to connect with him. Which is why he fills out supporting roles perfectly as the MCU goes on.

By the time we arrive at the Hulk’s next (let’s be honest, first) appearance in the Marvel Cinematic Universe in 2012’s The Avengers, a combination of factors allow for Banner an the Hulk to really flourish and become real, likeable, characters. 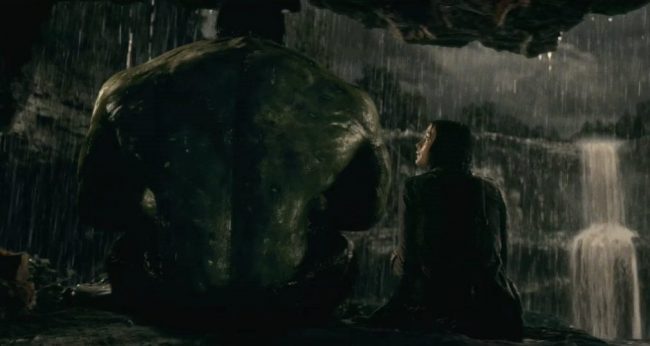 Mark Ruffalo’s portrayal of Bruce Banner is fantastic. He’s this nervous, awkward guy, who obviously has something about him. He’s a super genius, and thanks to him being placed in a room with Tony Stark, that fact about him is better able to shine through. Stark, despite his teasing, sees something of value within Banner that doesn’t involve the Hulk.

This burgeoning, semi-bromance with Tony Stark is the main thing that makes Banner immediately more interesting. It gives him something more to do aside from trying not to be the Hulk, his own character gets to shine through more. And then when the Hulk does show up, they do something really smart wit him, by having him fight Thor.

The one guy in the world (at the time) who could stand up to the Hulk and fight him pretty evenly. All of a sudden, the Hulk wasn’t this unstoppable monster. Seeing him get knocked around by this dashing, handsome blonde gave him some vulnerability. Not just that, the fight acted as a jumping point for an ongoing feud between the Hulk and Thor that would add some much needed levity to the character throughout his future appearances in the franchise.

The most important thing Joss Whedon does with this Hulk in The Avenger’s is give us moments to laugh, and laugh with him. I still remember the two biggest laughs in the cinema the first time I saw the movie. One was the Hulk punching Thor off screen, the other was the very cathartic beat down of Loki at the movie’s climax. They finally gave us a reason to laugh with the Hulk instead of just crying with him.

The 2008 Hulk always felt like a villain in his own movie. The saving grace of the whole thing being Tim Roth and William Hurt’s comically over the top villainy that overcompensate for all the horrendous stuff the Hulk is doing throughout. While the Hulk as an antagonist never stopped being a thing as the MCU rolled on, the later movies gave him more humanity, more likeability and made him more fun.

Turning Banner and the Hulk into a supporting character throughout a number of future MCU movies was the smartest move their could have made. I’m really looking forward to whatever resolution comes from the little character arc him and Banner have been on throughout Infinity War and Endgame. It’s amazing that, after watching 2012’s Hulk, the character could make such a dramatic turnaround that he is one of the characters I want to see the most in a film with a cast of thousands.

3 thoughts on “Revisiting the MCU: Salvaging The Incredible Hulk”