We arrive at the final day of entries before I decide what the hell I’m going to do for tomorrow. In the time since writing this list and posting it, I’ve had the chance to look at a lot of other writer’s game of the year lists. In doing so, I have seen a common sentiment. One that 2018 wasn’t as strong a year for video games as the year that came before.

Sure, Nintendo didn’t have another year in which they put out both a Mario and a Zelda game, but otherwise, I thought 2018 was just as strong a year for great video games as 2017 had been. I’ve still got a bit of laundry list of games I eventually want to get to when I find that rare combination of time and them being on sale. But, at least in terms of video games, 2018 was another good year. Even if everything else in the world is falling to pieces. 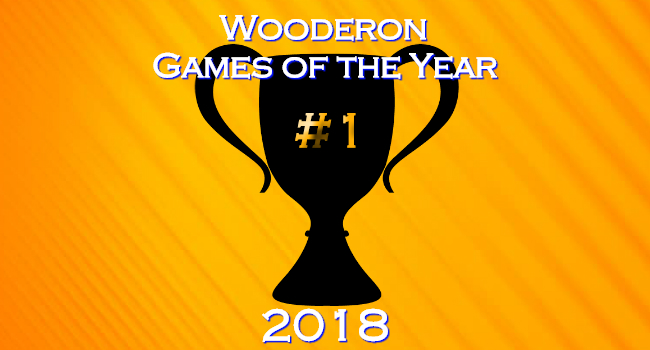 My number one entry is one I can’t see being controversial. If anything, I’d imagine that the majority of lists like there out on the internet either have this or Red Dead Redemption 2 at the top of it. They’re both very similar games in a lot of ways, one simply makes a much more… economic use of its open world than the other. But let’s get into it proper.

Before we get into it proper though, let’s reflect on the entire top ten list to end this year of video games and blogging:

I will struggle to find positive superlatives talking about this game. It does everything it attempts perfectly, and the areas it delves into are rich a varied. As I mentioned when I last spoke about God of War, I never had any history with this franchise. This essentially being my first bit of personal experience with the series, and it makes one hell of an impact.

God of War impressed me so much by nailing pretty much everything I really care about when it comes to video games. Firstly, it looks stunning. Stylised in such a way that it appears to take place in a single camera shot, never leaving Kratos’s perspective, the game’s world of gods and leviathans is all the more incredible to behold when rooted to this human sized perspective.

The world feels vast and impressive. Making the undertaking of the journey by Kratos and his son all the more daunting. Especially with the peppering of battles and environmental puzzles along the way. It is a visual masterpiece, filled with stunning vistas filled with giant snakes and dead titans. The game’s interpretation of Norse mythology is a great setting for this game too. Toying with the idea of multiple pantheons existing simultaneously and what that could mean going forward. 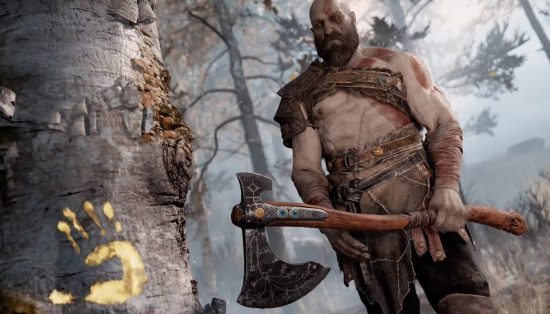 Where this game touched me the most though was in its story telling. For all the grand conflict between Gods and jumping between realities, the most engaging story within the game was the one exploring the relationship between Kratos and his son Atreus. It’s a quiet and personal story taking place in colossal surroundings. It was not an aspect of the story that everyone enjoyed, but for me it was one of the main things wanting to forge onward, like Kratos and his son were doing.

The relationship between the pair isn’t just released through cut scenes and dialogue, but through gameplay. The game starts with Kratos being impatient ant hypercritical of everything Atreus does, and that reflects in his lack of agency as he is wary of his father. As the pair’s relationship grows, so does this reflect in the gameplay. As the pair travel, their relationship grows and we start to sympathise more with Kratos, as we realise he isn’t the cruel rage machine of the game’s history, rather he is afraid of his own ability to raise a son alone. I’ve seen this turn people off for being cheesy, but it worked just fine for me.

This makes a great turn when Atreus learns his true nature as part God, and rather than being angry as Kratos had feared through, he becomes arrogant and this reflects in gameplay when he ignores player instruction and rushes into combat without the player. It’s a rare example of story told through gameplay that very few games seem able to accomplish. With even the very best games still having the narrative and the game running along side one another but never truly interweaving. 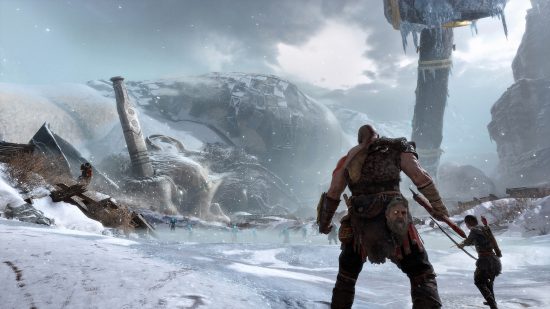 Within a year of which many games struggled to fill their worlds with content to match their insane scope, God of War finds a perfect balance. Where as Red Dead felt vast and sparsely populated, and Assassin’s Creed even more so, The world in God of War was compact, despite feeling huge. It made the choice of having its central open area get deeper as the story progressed, through the lowering of the water levels in the lake. Meaning less time travelling, which isn’t even an issue with your talking lore head companion telling some great stories along the way.

And calling that axe back to you hand never stopped feeling cool.

God of War the game that impressed me the most in a year where there were a lot of games to be impressed with. While I felt satisfied with my experience after seeing the story’s ending, and never pursued the additional challenges, it was the most rewarding narrative experience of the year for me, and that oftentimes goes a long way to making me love a game like I do this one. Santa Monica did an amazing job totally reinventing this franchise and I can’t wait to see what they do next.

And there you have it, my top ten video game list of 2018. There were still games I wanted to get around to and never got the chance to. Frostpunk, another new Yakuza game and I still never got around to Nier: Automata. On top of this, 2019 looks pretty front heavy in terms of releases. So I’m already looking forward to doing all of this again next year.