It feels par the course that I go and complain about the thing that everyone else in the world loves right now. I don’t see myself a the ultra negative internet type person who just criticises everything for attention.

But I’ve got nothing else to talk about right now seeing as all I’m doing is playing Red Dead Redemption 2… Plus, I’m nowhere near close enough to the ending of the game, so I can’t realistically be expected to give a full review of it at this point in time. So what else is there to do than pick five things about the game that annoy me slightly in what is, otherwise, a brilliantly made game.

I’m not going to talk about karma again either, I already got into the weeds with that one the last time I rode the gloom train through cowboy town.

#1: How long it takes for your hair to grow

Seriously, I want Arthur to have a giant luxurious beard that I can then shave down to a set of ridiculous mutton chops for a while, before cutting that down into the world’s most unholy moustache.

I’ve been playing the game a long time, spent countless in-game days roaming the wilderness, sleeping out under the stars, eating the skunks and pickerel I catch along the way. Occasionally, I’ll venture into town to purchase and guzzle hair tonic, the effects of which are dubious at best.

But after this crashing together of science and mountain man lifestyle, the hair on Arthur Morgan’s mug and noggin’ still only sit at the forth tier length. I get they wanted to create some kind of simulation aspect of the game here, not allowing you to go to a barber and ‘cut’ your hair longer.

But sometimes I wish the upkeep/management aspect of the game was slightly more prominent than it currently is in the game. Cleaning guns, cleaning myself and maintaining my character feels unobtrusive enough that it doesn’t come into effect enough.

#2: Every assault and murder being just a friendly greeting away

The controls of this game are unwieldy at times. I feel like, after so much time entrenched in this cowboy world, generated for entertainment for the masses by a large corporation (the presence of robots within is still up in the air), I kind of managed to get a handle on the controls.

Early in my cow punching career, there was a real issue with most things being on the same trigger buttons. Those same actions could either be striking up a friendly conversation with a man whose inner thigh needed some venom sucking, or the fastest gun in the west putting six slugs of lead into the bartender you just wanted a bowl of stew from.

It’s not just that the actions are context sensitive either, Arthur is one sluggish moving man. He takes a while to really get going when you move the stick, but believe me, once he is revved up, nothing can stop his relentless barrage, not that innocent lady of the evening, not that saloon door and certainly not that quest NPC whose dramatic horse collision pulls the brakes on whatever immersion in the game I was experiencing.

It’s like learning a new language, you use it enough and it’ll eventually stick with you. I’m still forever panic zooming in on my scopes though.

#3: That Scout Jacket I bought has some real bad texture pop-in

One of the first things I did when I got myself out of the frigid north and found myself moseying into a lively mud pile of civilisation, was run into the store, slam through that door and play dress up. Cowboy dress up too.

Arthur Morgan is a handsome chap. It’s only right that I keep him looking dapper and have many, many outfits for him to wear depending on his various commitments. This early in the game, I was short on cash and the ability to even buy the items listed in the Valentine Top Man catalogue.

So, I carefully decided on the items most important, a hat obviously, boots and torso covering. For this last item, I picked out a lovely wine red corduroy jacket with a woollen lining. Perfectly functional and stylish for the scouting that the jacket was named for.

However, I quickly noticed an issue. The game was highly offended by my choice of clothing and expressed that through a refusal to render the texture on the jacket properly. Flashing a black colour, the texture changing entirely and other bizarre looking psychedelia.

In the time since, I have never seen this happen with any other item of clothing, even the same jacket of a different colour later on. So the only conclusion I could draw was that Rockstar was jealous of my raw, unadulterated style.

#2: The Bandit mask doesn’t do squat 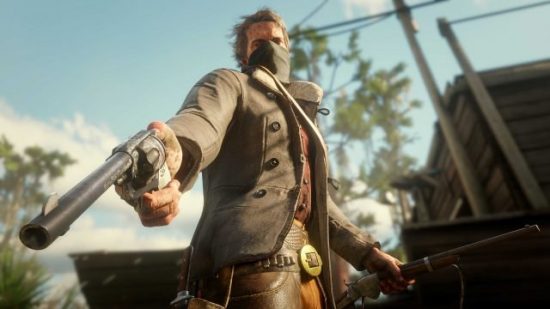 Seriously, what function do these masks serve. In the description, they say that they protect your identity whilst committing crimes. Do they hell. In my game, Arthur Morgan is a fine and upstanding murderer/thief. However, sometimes events fall outside of my well laid plans, events the local law enforcement don’t take too kindly to.

Luckily for me, I had a feeling things would go sideways and covered my face with one of my various coverings beforehand, hoping that I would gain a reputation as some masked scoundrel and vigilante. Then I could begin a duel identity as both Arthur Morgan and The Buffalo Bill Man.

My dreams were quickly dashed when a sign popped up at the top of the screen stating Wanted: Arthur Morgan, Murder… Bitch, how’d you know that was me?! I escape with a permanent bounty on my head that I would have to pay off at my local post office after wanting in a long line of people picking up their pensions.

The bounty system is a little baffling at times. I defend myself from a holdup while travelling, and as I loot those dastardly thieves of their possessions (and get negative karma for doing so… I said I wouldn’t mention it…) A lone man spots me and rides away to grass me up to the sheriff. The game recommends I put a stop to him. I feel like I’ve already lost the white hat points at this point, might as well shoot this innocent man in the head.

Half an hour later I randomly get a $15 bounty on my head, What? Why? For killing the witness? Or was it for something else? It would be nice if the game was a little more clear on this, especially when it was some long amount of time passing between crimes and picking up bounties with no apparent witnesses.

I’m fine with getting a bounty on my head, all things considered, I probably deserved it. I’d just like to know which specific demeanour I am getting my face on posters for.

Okay, real talk. This is my genuine biggest grievance with the game. Being a sharpshooter and quick draw artist is one of the wish fulfilment check boxes on the cowboy checklist. Two men (or Women) standing across from one another, eyes narrowing, fingers twitching towards the handle of their revolver, itching to caress that fine polished maple.

It’s a classic scene, in cinema and spoofed by cartoons in the time since. But that doesn’t mean that it’s not an honest, even and pure cool thing to do. So how do they portray this in Red Dead Redemption 2.

Well first off, the quick draw happens, and a tool tip pops up at the top of the screen explaining the mechanic, you get half way through reading that and then you’re dead, shot in the head. This goes on for another dozen or so times before you manage to fumble your way through mashing the shoot button.

Seriously, the big tip the game gives you is to lightly press the right trigger to line up your shot. As much as I understand the instruction, for some reason, executing it always feels more luck than intentional to me. I’ve fumbled my way through three quick draws so far and despite dying a whole bunch during each one. I still don’t feel any better to understand what I’m doing.

Seriously, a hick time event would have been preferable.

Thanks for reading me ragging on things in Red Dead 2. I had fun writing this, and I don’t think I’m quite done with Red Dead yet either on here. Although it might be difficult for it to keep my attention with the real biggest game of the year coming out today: Spyro