You might have noticed I took a bit of a break from my blog this past month or so. I covered it on a post the other day where I basically went on a big old rant about losing my motivation and burning myself out. Part of the reason being how much I found myself recapping episodes of shows rather than thinking about them at all.

My Clone Wars series being a major culprit in this.

The thing is though, I still want to watch and talk about Clone Wars. So going forward I’m going to change my approach. I’m going to do my best not to fall into old habits and just recap episodes, instead I’m just going to talk about them. Which will hopefully stop these from ballooning up to the size they have been.

Holy Hell! I don’t know if it’s because I took a big break from watching Clone Wars as well as writing about it, but these two episodes have been amongst the best I’ve seen this entire series. The previous two episodes I spoke about showed Darth Maul and his brother Savage Opress hit rock bottom when they tried to make a pirate army.

From there, Maul bode his time and started making an army out of the entire criminal underworld it seems. With the plan to use the Mandalorian Pre Vizla as the face of his new criminal empire. The problem with this plan being that Pre was a proud Mandalorian, and planned to do away with Maul and his brother at the earliest opportunity.

Through these episodes, Maul has turned into a fascinating “protagonist”. While he is certainly evil, his journey is so compelling, he had truly developed past the mindless assassin he once was. There’s just something more fun about watching the bad guys, at one another’s throats all the time. His plan is to invade the planet of Mandalore with his criminal army and have the Death Watch stop them, becoming heroes in the people’s eyes and inspiring them to return to their warrior way.

I’ve made it no secret that I was never a fan of the the changes Clone Wars made to the Mandalorian people. It feels like this storyline is course correction in part, showing just how weak and ineffective Satine’s Mandalore actually is. I mean, a few dozen low lives show up in your capital city and you don’t have a police force powerful enough to combat them… It’s pretty embarrassing to be honest.

I know I’m not supposed to be rooting for the villains, and we live in a time where some passionate idealism wouldn’t go amiss, but the cynic in me just always found myself getting annoyed with Satine and her holier than thou attitude. I know this is a literal fantasy, but even her insistence on running an entire government while being whiter than white was painfully naïve.

Maybe the writers realised this too, because Pre and Maul taking over Mandalore seems hilariously easy. So much so that the focus ends up culminating on a final, one on one duel between Maul and Pre rather than the takeover itself. One that would decide the future leader of the Mandalorians. A concept we’d see return during the second season of the Mandalorian. Where Bo-Katan was having her little episode when Din Djarin ended up defeating Gideon for the Darksaber without knowing the the ramifications behind such an act.

The battle between Pre and Maul is thrilling to say the least and ends with the brutal decapitation of Pre at the hands of Maul. The consequence is a rift between the Mandalorians. It’s here that Bo-Katan really comes into her own as a character. While she’s been around before now, I know she becomes a major character in Rebels going forward and an ally of Ahsoka Tano. So to her her origins and how how she splinters off into her own clan here is satisfying, as I continue to consume this franchise ass backwards.

The following episode is even more exiting than the first. Having taken control of the planet, Maul moves onto the next stage of his plan: To eliminate Obi-Wan Kenobi. He does this by orchestrating an escape attempt by Satine, knowing full well she would call her precious Obi above the rest of the Jedi. That’s because the other Jedi give one of the most blatant examples of them playing politics rather than doing the right thing.

As I always thought they were supposed to do. Y’know, as Jedi.

Which seems especially apparent having spend some time reading The Light of the Jedi these past few weeks. Obi-Wan is forced to travel to Mandalore alone, because the Jedi deem it outside of their jurisdiction because Mandalore declared themselves a neutral force outside of the Republic. This even comes from Yoda. Y’know, I love Yoda. But fuck Yoda.

The Jedi really have lost their way, which I guess why this arc of Star Wars lore is being called the Fall of the Jedi now. And while Obi-Wan’s attempted rescue of Satine plays right into Maul’s hands, which eventually murder her right in front of Kenobi’s eyes just to fill him with repair, that’s not what got me excited about this episode.

It seems like Palpatine has had enough sitting on the side-lines and personally travels to Mandalore himself to deal with his old apprentice. I was never expecting Maul and Sidious to come face to face again. And I’m surprised to see Maul immediately become subservient to his old master again. I always thought that Maul would resent his old master for replacing him so readily after his defeat on Naboo.

But he quickly bows to Sidious as he glides into the room. There is always something hilariously Machiavellian about Palpatine playing the sinister puppet master on Coruscant. Playing this nice old senator while being all evil and stuff under a pretty thin veil. But see him him effortlessly brush aside Mandalorian guards and the power he holds over Maul still as he enters a room

It makes Palpatine genuinely seem threatening, as he should be. Even more so when he whips out his own lightsabers and begins duelling the Night Brothers. I hesitate to make comparisons to Goku’s Ultra Instinct here, but there is something about the strange, almost unnatural movements Sidious executes during the battle that make it obvious he is far beyond the two Zabrack Sith. In fact it makes him seem above pretty much any other Jedi I’ve seen in this series.

Much to my own shock, Sidious kills Savage and heels Maul into a quickening wreck. So once again, after seeming like he had it all. Like he was on top of the world, fully in control, his old master returns and he finds himself on rock bottom again. Begging for mercy.

Ending with Palpatine telling Maul he isn’t going to kill him, that he has plans for him. 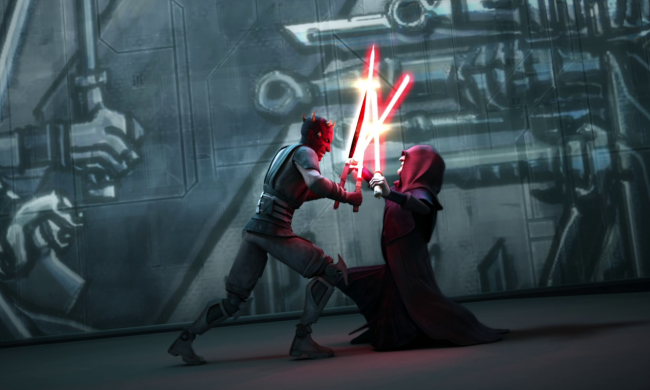 I’ll take a moment to talk about Savage Opress. He was an interesting addition to the series. To begin with I felt like I saw him as something of a replacement for Maul, someone placed into the series to homage to the character while not being him. And then the series went and reintroduced Maul anyway, which made Savage a second banana to him.

I liked that dynamic though, there was a distinct “Old Republic” feel to the pair of Sith going about and perpetuating their business. I continue to lament how political the Jedi have become within this series, seeing this pair of Sith just out in the world and doing whatever they want was refreshing. By the end, I was kind of rooting for them.

I loved these episodes. Maul and the Mandalorins were fantastic leads for this storyline. I’ve really come to enjoy Maul throughout this story as it chronicles his rise to power. It’s just a shame it falls so flat so quickly when his old master makes a reappearance. Seeing Palpatine actually out and doing things is surprising too, it being the first time we’ve seen him fight throughout the entirety of Clone Wars.

Going forward, I think I’m going to start watching these episodes in bigger batches and talk about them from a more overall perspective. I kind of want to power through the rest of this series now, seeing as how I want to get through Rebels as well before the hella spinoffs coming to Disney Plus get going.