After the previous couple of episodes, during which we got some pretty staggering revelations in regards to the wider Star Wars universe, this trio of episodes goes back to familiar territory for the series. Returning us to the kind of story that kicked the series off in the first place. That’s right, we’re back to the war.

Only this time, we’ve got a special surprise guest along for the ride.

Like I said at the top, this is back to the more standard fare for the series. We learn that Lannik Jedi Master Even Piell has been ambushed and kidnapped by the Separatists, and it’s up to Anakin Skywalker and Obi Wan Kenobi to form an elite strike force to rescue him. The big wrinkle being that the Master Piell is being held at the Citadel.

Located on the world of Lola Sayu, the Citadel is a prison constructed by the Jedi Order specifically to hold the most dangerous criminals the galaxy has to offer, including rogue Jedi. Unfortunatly, in the time since then, the planet has been captured by the seppies and turned into another of their sinister-looking strongholds. 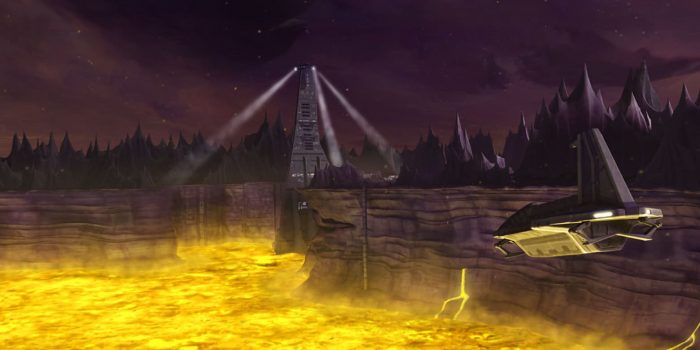 This elite strike force the Jedi put together is made of the best Clones we’ve seen thus far, including Rex and Cody, as well as the returning members of Domino Squad; Fives and Echo. Who are both decked out in their ARC Trooper gear now. In addition, R2-D2 has his own little platoon of reprogrammed Battle Droids, which is pretty cute.

The first story beat in this episode comes from Anakin telling Ahsoka that it’s too dangerous for her to accompany them, and that she’s being left behind. Not the first time this has happened, but on this particular example, she decides she doesn’t feel like following orders.

Anakin and Ahsoka’s trusts of one another is something I find seems to fluctuate wildly from episode to episode based on the requirements of the story. There have been a few times where Ahsoka has gotten her heckles up because she doesn’t think her master trusts her. And yet every time this does happen, I can’t help but think back to the season 1 episode: Storm over Ryloth, during which Anakin basically put his life in her hands while she’s having a major crisis of confidence.

Ahsoka decides to go with the “mom said no, let’s ask dad” approach and tries to bamboozle Plo Koon into telling her its okay for her to stow away along on the mission anyway. Arguing that Anakin doesn’t have the right to pick how she risks her life. Honestly, I really disagree with this one Snips.

Not only are you still a child, and a Jedi Padawan, you’re also a Commander in the Republic Military. Those are three very specific situations in which you are required to do as your told by your superior. You don’t have to like it, but acting childish about it and trying to create some kind of moral high ground doesn’t really put your in the right in this particular situation.

But then again, I’m not complaining too much considering this episode is pretty light when it comes to character work, not really having anything else to carry it beyond pure action. It needed something in there to keep it from being a recreation of one of the duller affairs of the first season when they were purely action and little else.

Using carbon freezing, having stolen the set from Bespin and plopped in the middle of some Coruscant hanger, Ahsoka stows away and the team manage to infiltrate the prison planet while masking their life sign. After hijinks and a thrilling climb to the base itself, the team are busted and find themselves rats in the prison’s maze.

One controlled by Osi Sobeck, a Christopher Walken sounding lizard man whose manipulation of the prison against the Jedi and their teams brings me back to the season 1 episode: Lair of Grievous in which the gGeneral did much the same thing to Kit Fisto. 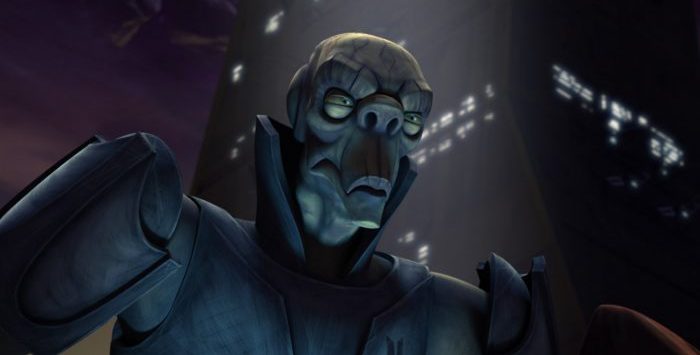 Despite his best efforts though, the Jedi rescue Master Evan Piell, who reveals that the Separatists wanted secret Hyperspace routes from him that would allow them to bypass the Republic defences and assault Coruscant directly. However, things aren’t quite as simple as we would have liked. While Piell has the only record of the routes, he only remembered half. Entrusting the other half to his Captain.

A captain who turns out to be one Wilhuff Tarkin. This reveal took me by surprise honestly, they don’t really tip their hand leading up to the reveal, it’s just him there and we all hoop and holler in shared recognition of CGI Peter Cushing.

And Tarkin is a douche. Seemingly desperate to be contradictory and eager to find fault in just about everything right from the get go. Even though a crisis situation really isn’t the time to be looking down your nose at anyone. Bickering with Anakin and Ahsoka right away. Arguing with them because their plan seems to be going well. What?

“It’s when things don’t go as planned that worries me, what then?” Seriously dumbass? You’re in the military, you know full well things don’t always go to plan. That’s what contingencies are for.

The following episode continues the story, as the two teams of Jedi have split up to protect the two halves of the Hyperspace routes in case of recapture. And right away we get more of Tarkin being Mr. Controversial. Although, weirdly enough despite them butting heads at the end of the previous episode, him and Anakin start this one by agreeing on something.

Tarkin seems pretty interested in this prison build to hold Jedi. They both have a brief discussion about the Jedi’s role in the war and both agree that the Jedi, in their current state, don’t do enough to fulfil their role. As they’re held back by their pacifist code. I find it kind of weird that they’re agreeing like this, but then I think about it and realise that these three episodes are all part of the establishment of their eventual relationship later on.

For the most part, this episode is a lot of action. It’s Anakin suspecting Ahsoka is lying about Master Koon assigning her to the mission, Obi Wan getting captured and then liberated by R2 and his droids before their escape ship is assaulted by the full force of the Citadel’s army.

While the teams are about to converge on the landing pad, the droids manage to use an AA gun to destroy the landed ship, cutting off their escape and killing Echo in the process. Stranded behind enemy lines, the strike team is forced to call the Jedi Council for backup, summoning an invasion force to break through and extract them.

Now on the run on this volcanic world of yellow lava, the team is given an incredibly questionable extraction point some way across the planet. Battling off Battle Droids and alien hunting dogs, the team have their hands full trying to survive Sobeck, who himself is dodging Count Dooku’s calls. Increasingly frustrated by the lizard man’s failures.

Ahsoka questions Tarkin’s bad attitude, to which Anakin defends him. In just two short episodes, these two seems to have become pretty buddybuddy, despite only really having a couple of conversations with one another. Anakin tells Ahsoka that the Jedi are supposed to be peacekeepers, not military commanders.

Something that feels highly opposed to the kinds of behaviours I’ve seen him displaying a lot in the series up until this point. I’ve said it multiple times before; Anakin = Great Military Commander, is also a pretty bad Jedi. Then again, even Obi Wan says in the first episode, Anakin has a very “do as I say, not as I do” style of teaching.

In what comes as a surprise move for me, Even Piell is killed by one of the hunting dogs that ambush both him and Ahsoka. Piell is a character that appeared in both the Phantom Menace and Attack of the Clones, so for him to die during the events of the Clone Wars series is a decisive, lore establishing move that I’m surprised to see from the series.

Before he dies, he has Ahsoka commit his half of the hyperspace routes to memory. Then they have a little ceremony, wrapping the Jedi’s body in cloth and then lowering him into the lava. It’s a respectful move, but for the sheer amount of Clones who die in the war and are just left behind, it seems that even the Jedi seem to have some skewed value of life between them and their army.

As the remaining team arrive as the incredibly questionable extraction point the Jedi are ambushed on the small island in the middle of a lava lake. It’s a very exposed location and one that almost gets Tarkin killed. However, he’s saved at the last minute by Ahsoka who puts a lightsaber through Sobeck’s back. Something that Tarkin can’t help but be snide about even when thanking her.

Either way, with the named villain out of the picture, its not long longer that the Jedi are rescued and extracted from the planet.

The episode ends on a landing pad on Coruscant, with both Tarkin and Ahsoka arguing about sharing the information they have. Tarkin insisting they take it to Chancellor Palpatine, while Ahsoka being equally adamant that she deliver it directly to the Jedi Council. After Tarkin leaves, Anakin questions Plo as to whether he okayed Ahsoka’s involvement with the mission, to which he lies for her and says yes.

I’m not sure I buy this whole budding “friendship” between Anakin and Tarkin. I get that it’s all in the effort to establish some kind of relationship that eventually leads to their interactions in A New Hope, but he was such an insufferable douche that I couldn’t believably see Anakin warming to him. Especially considering he claims Tarkin is a good officer, when we don’t see him do anything within these three episodes to actually corroborate that assessment.

It’s weird, I’m not sure we’re supposed to actually like Tarkin, especially considering he’ll commit an act of mass genocide a couple decades later. These are action-heavy episodes, and while there is some character work in there, it falls a little flat when its all just supplementary to the action that’s driving the story forward.

These are plot driven episodes, not story driven ones. And while not bad, they’re a collection of episodes that I could probably stand to miss. Honestly, the strongest thing I felt throughout was seeing Echo getting blown up. This leaves Fives as the sole survivor what was once known as Domino Squad.

Next time, I’m covering the final two episodes of season 3. Following that, we’ll be moving into the parts of the series I definitely have no knowledge of outside of the fact that I know Maul is in there somewhere