Finally, Disney + has come to the U.K. Thanks licence exclusivity laws. It’s been something I’ve been anticipating for a while now, as it seems like streaming service tailor made for me. Not just because it’s packed with Marvel, Pixar and all manner of other shows and movies Disney has under its giant, monolithic, intimidating umbrella, but because it’s going to allow me to start a series on here I’ve been thinking about doing for years.

As much as the fandom has rallied behind the 2008 Clone Wars series, it’s not a series I’ve ever been able to watch properly. I’ve seen plenty of it, but never had the chance to really dig into it and appreciate why Star Wars fans, new and old alike, have such a love for it.

The purposes of this post are twofold, for me to establish what I’m going to be doing in this series, but also talking about the movie that served as the pilot for the coming series, and did a wonderful job starting it out on the wrong foot. Spoilers about what I thought I guess.

The Clone Wars was originally intended as an anthology T.V. series, documenting stories from the three year span between Attack of the Clones and Revenge of the Sith that made up the Clone War. The series itself jumped around in the timeline and focused on different characters, some already established from the movies, others created entirely for show itself.

It was George Lucas, in his infinite “wisdom” who decided that the initial three episodes of the series should re-cut into a single feature and then act as a pilot for the series that would follow. A decision that might not have been for the best given the sophistication and complexity of the long form stories being told in the series to come. Cutting these establishing episodes down to a movie format ends up undercutting the goals of the show in the first place.

I’ll get into the movie itself a little later on though, for now I’m going to say what I’m planning. As I mentioned before, The Clone Wars was made as an anthology series that could jump around the timeline. Today though, Disney have a helpful little list on Starwars.com that lists the entire series in chronological order.

So, using this list, I’m going to rewatch the series a handful of episodes at a time. I’ve mentioned this numerous times before, but to me Star Wars is much more than a series of movies. It’s a collaborative storytelling exercise, unlike the Marvel and DC comic books worlds in which there are infinite iterations of the characters in their own separate narratives, Star Wars was all made to fit into a single continuity.

A single, ongoing story that I was deeply ingrained into during my youth, through the comic books, the novels and the video games. A continuity that got thrown out of the window and reset when Disney purchased the rights to Star Wars from George Lucas. The Clone Wars series is the sole survivor of that particular order-66; and thus the story bridges the gap between the old continuity and the new one.

I’ve been wanting to try and get a foothold into the new continuity for a while now, and couldn’t think of any better way than to start with this series that kicked off this new era of Star Wars storytelling.

During this series I’ll look at the style used throughout, the themes and stories being told within them as well as the characters introduced, expanded upon and how they take from the established older continuity and what they change going forward for potential use in future series or movies.

But before I get into all that good stuff, I first need to spend some time talking about the 2007 pilot/movie that kicked the story off. George Lucas described the movie as an afterthought, he probably didn’t mean for it to be a slam on the movie, but it’s the perfect word to describe it.

It might be apparent already based on what I’ve already said, but the movie was poorly received when it came out, called the worst Star Wars movie to date. Which is a pretty funny notion considering where the fandom is at these days. While the series is revered for being pretty mature in how it deals with real issues of war, morality and growing up, this movie contains none of that. Instead it feels like the content and tone of the prequels, distilled down to a concentrate. 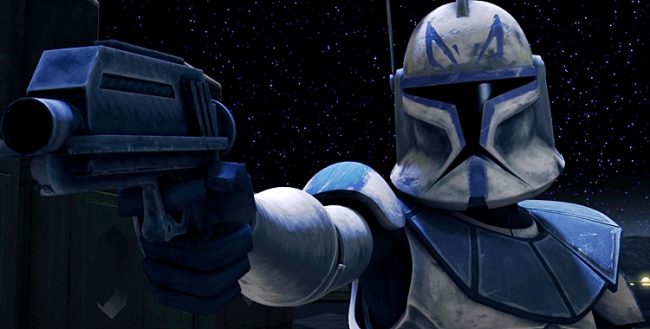 The movie begins amidst a conflict of the Clone Wars, Anakin has already become a Jedi Knight and we’re introduced to his own new padawan; Ahsoka Tano. Had this been written as a movie from its inception, the narrative would be one of Anakin initially rejecting her as his student, before the pair go on a journey and learn to accept one another through adversity. But because this was an afterthought, we don’t get any of that.

The movie feels disjointed, it lacks a narrative through line and simply feels like exactly what it is: three episodes of a television series stitched together. Anakin accepts Ahsoka almost right away after they meet and from there they have no conflict. While Ahsoka will go on to become a fan favourite, a character who grows and changes as she goes through hardship, this movie establishes her as a spunky, impetuous kid who is in in need of some grounding.

Putting her in the care of someone like Anakin, who himself needs someone to force him into acting a little more mature and responsible, seems like a perfect matchup. The problem is after realising that Ahsoka is only acting out because she wants people to stop treating her like a kid, and seeing himself in her, the pair just become partners in crime. Bantering and quipping with one another to a point well beyond obnoxiousness.

The writing throughout the movie is pretty weak to be honest. It’s a very plot driven story, where events bounce characters from one location to another without giving them anything to do aside from react. As a result the banter is relentless to the point that even Obi Wan Kenobi becomes so insufferably smarmy that I found myself missing Ewan McGregor all the more.

Aside from that, the movie does establish a number of reoccurring characters and elements that we’ll see throughout the series going forward. It introduces Captain Rex, a Clone who’ll become closely associated with Anakin as his liaison to any troops under his command, and also the first step towards the humanisation of the clone army as a bunch of individuals with their own eccentricities that make them more human the droid.

Something that will continue as they come the focal point of a number of episodes in the future.

It introduces the Ahsoka and establishes Asajj Ventress; Dooku’s Sith assassin and a character who has been knocking around since the concepting stages of Attack of the Clones. Ventress might be the most popular expanded universe character that I’m amazed never saw any kind of live action realisation. Being a presence throughout the Clone Wars Multimedia project and being in the cartoons and books that spanned the timeline of the old expanded universe.

It also creates the trait of the B1 Battle Droids being bumbling sources of comic relief. While the concept of a robot not being able to remember their own orders is ridiculous, it does make some kind of sense given they’re established as being a cheaply mass produced army. And yet, it further gives personality to the participants of this conflict, where as the movies seemed to want to draw similarities between the clones and the droids as a faceless, synthetic army.

This series, however wants to oppose that in any way it can. And while some might find the droid’s new personalities annoying, it’s an important step in that direction. Given the goals of the series in the future.

Had these stories been split into separate episodes, the sporadic, piecemeal approach to character development would have made much more sense. Recontextualising the events into a single movie format works to its detriment, especially considering it wasn’t written to be as such.

This movie was a bitter pill, necessary to swallow in order for me to continue on and dig into the series and talk about it at its best, helping me remember why I loved Star Wars so much in the first place. If the Mandalorian wasn’t doing that already.

To anyone reading this though who might be interested in going on this same journey, I’m just going to say now; this is not required watching. While it may introduce Ahsoka to the audience, it doesn’t do anything important enough with her that you can’t simply pick up from just watching the series.

The 2007 Clone Wars movie does introduce some key characters who’ll become important as the series goes on, but doesn’t really establish anything important enough about them to make it worth sitting through a cobbled together movie that feels like it was made for T.V. If you know the character introduced in the prequel trilogy, you know enough to skip this one and just jump right in to the series, whether you decide to watch it in release order or chronologically.

Next time I’ll be looking at the earliest two episodes in the Clone Wars Chronology, and the only two that take place before this movie.