I haven’t really written anything in a while, I’m hoping I haven’t gotten too rusty at it. I know I certainly don’t carry my tastes with the same pretension I used to. I’m more of a yay or nay kinda guy now. Either I liked it or I didn’t. When it comes to Marvel’s latest Netflix series, the Defenders. Well, I enjoyed myself. 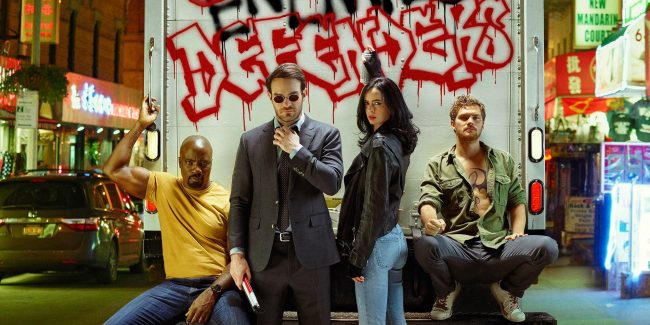 When it comes to the Netflix Marvel shows, I’d say I’m a fan, to but it as bluntly as I can. The first three, I thought were amazing pieces of television. Dark and gritty character studies that went to the places we sometimes wish the mainline movie franchise could if it wasn’t held back by a PG rating.

I loved both series of Daredevil and Jessica Jones for their incredible villains, their brutal fight scenes and the slower pace they afforded themselves. It was because they did this they were able to be about people and not just about heroes. I didn’t really talk about the other two Netflix shows on here after the second season of Daredevil aired.

I had mixed feelings on Luke Cage. I liked the cast a whole lot, feeling Mike Colter was a big presence on screen and a much more heroic figure than the protagonists that came before him. It carried a lot of themes and messages at I felt were lost on me but I still enjoyed two thirds of the series a whole lot. It fell apart for me when the Diamondback character was introduced and things started to go sideways.

Iron Fist. I felt like this was the weakest series Netflix had produced thus far when it came to the Marvel properties. Most of this was due to Finn Jones’ performance as Danny Rand. Never mind how off character he felt in comparison to his comic book counterpart. He was a plain uncharismatic and tiresome lead. Most of the series was saved by the side characters, especially the patriarch figure of Harold Meachum, played by David Wenham. The highlight of the entire series in my opinion.

It wasn’t a great place to leave themselves before their big crossover series that was the Defenders. Thankfully, one bad leg didn’t bring down the horse in this metaphor and I still got a real kick out of the Defenders regardless.

The only thing I’d say it’s important to bear in mind before watching the Defenders is that it’s a very different type of show in comparison to the ones that lead up to it. While the hero team’s individual shows were filled with quiet moments, delving into their character, their motivations and their personal demons, Defenders very much feels like a pure action show. 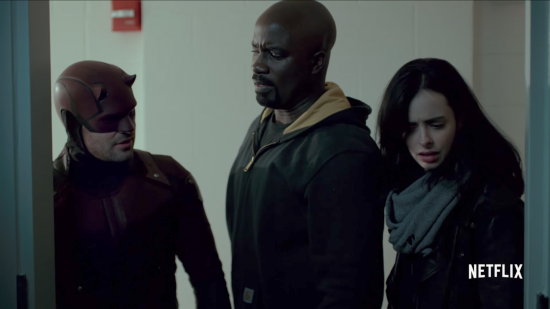 Hell, I’m just going to say it. The Defenders is, very much so, the Avengers to Netflix’s “Phase 1”. It was loud, action packed and featured many of its less “punchy” characters as cameos and little else. There wasn’t a whole lot of room for emotional growth or development here. It’s put on hold this time around and replaced with witty banter, in-jokes and hero poses.

While the thing I enjoy the most about Netflix’s Marvel shows is their darker approach and their dealings with more difficult topics such as mortality, addiction and even rape. Turning these larger than life comic book characters into relatable human beings with vulnerabilities and problems like the rest of us. I was under no illusion that Defenders was going to be anything but a loud and flashy team up series.

And for what it was, I enjoyed it. While the show didn’t delve too deeply into the characters, it didn’t forgo to the trend altogether. It Picked up Matt Murdock in a much better place than when he’d left off at the end of season 2. Rather than giving up the Matt side of his life to be Daredevil, he seemingly has done a 180 and is now “retired” from being the Devil of Hell’s kitchen. It feels like he gets the most real development in this series.

Followed by Jessica, who is shown to still be reeling from the events that ended her series. She gets a real arc through the Defenders and ends the series in a better place than where she started it. The four leads play off one another really well, their personalities clash and mix in a number of fun ways.

Despite my continuing misgivings about Finn Jones, some of his best moments in this series come from his interactions with Luke Cage. When playing off the much larger than life character, Finn Jones brings a better and more lighthearted side of his character out. I feel like there is a Power Man and Iron Fist series in Netflix’s future and based on their scenes together in this show I feel like it would benefit both characters to combine their shows at some point in the future.

One of the other things that I felt Iron Fist lacked where Daredevil excelled was their fight scenes. While Daredevil’s fight scenes were drawn out, brutal and realistic, Iron Fist’s fights had a cheap TV Kung Fu feel to it, with a lot of cuts and unnecessary slow motion. This isn’t meant to be a jab, but it felt a lot like CW’s Arrow series.

Fights in the Defenders were better than Iron Fist most definitely, but not quite up to par with Daredevil. We still had some great fights here like Iron Fist and Luke Cage’s first fight and Matt’s final battle in the series was very good too. I don’t want to spoil the final episodes, but it really shows that Matt got a lot more to do in this series than the other characters. It was a great finale that does put a cap on the through line of the Hand.

Defenders is not a deep series, nor a complicated one. But It did when it what it set out to do well. It was fast and thrilling. It seemed somewhat self aware of its shortcomings in leading up to this crossover and addressed them somewhat. I would have liked to see some more quiet moments throughout to allow the performances to really he story rather than the action and one liners. It’s worth a watch though and I hope that going forward the series are slightly more connected to one another now the character have finally met up with one another.