If you want to check out the series of me rewatching the MCU movies up until now, click this link.

It take both humility and the ability to admit you’re wrong to be able to turn a movie franchise around in such a dramatic way as this. They’re traits absent in most high powered executives. Their egos couldn’t take it. And yet, some combination of factors at Marvel Studios, be it the astounding number of wins they’d been on for a while now or maybe just a rational human being finally got the ear of someone in a good mood.

Whatever the reasons, turning two of the weakest entries in the franchise, totally reinventing them and making one of the weirdest, most charming sharp left turn I can think of any movie franchise ever making is something Thor: Ragnarok needs to be celebrated for.

I spent almost the entirety of my previous two Thor posts criticising the movies. The first one; how they managed to open and close the entire character arc of their name protagonist within the space of a single movie, and the second one was just a wash entirely. I still think Dark World is the worst movie of the lot right now. Tom Hiddleston’s Loki being the only saving grace of the whole thing, which I got into when I spoke about that movie.

Thor himself went from being an arrogant asshole, and suddenly transforming into a gallant hero, willing to sacrifice his life for the mere mortals around him in the space of less than 48 hours. But with that story finished, Dark World struggled to find something to do with the character going forward. Thor became this stoic, self serious dullard whose brooding in the second movie must have been as painful for Chris Hemsworth to perform as it was to watch.

It was a disservice to both the character and the actor.

Hemsworth’s comic timing in the Avengers movies, coupled with the more lighthearted moments throughout really stuck out, stronger than most of the stuff he was given to do in his own movies. Thor was being wasted. Something Marvel themselves eventually began to realise, thus making the decision to “soft reboot” the Thor series. What I didn’t know was that there were apparently up to 10 totally different pitches for the movie knocking around by the time it got to director; Taika Waititi.

Throwing the book out of the window

Waititi seemingly mashed a ton of those ideas together, along with his own unique perspective on things, creating a sizzle reel of weird and wonderful visuals and music choices. Something Marvel apparently loved. Consequently, Ragnarok is a weird movie, but in all of the best possible ways.

Waititi brings an entirely new tone and personality to the series, making it almost unrecognisable from the dour period drama tone of the movies that came before. It was apparent right from the first trailer and neon 80s inspired title card. The first trailer is a great example of how the movie changed actually, it starts off in the same style and tone of the older movies, before kicking into Led Zeppelin’s Immigrant Song, becoming more and more outlandish before ending on the “he’s a friend from work” line. 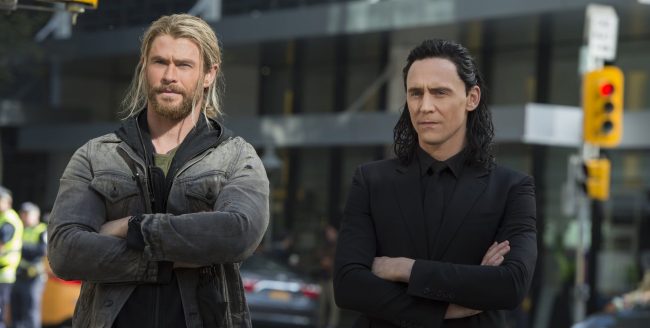 In the space of a two minute trailer, you get a condensed experience of the change in tone and increased focus on fun and comedy. It feels like it was made with the express purpose of making up for the inherent weaknesses of the first two movies, while also not being afraid to poke fun at them.

Before, everything that took place in Asgard felt stilted, viewed through a lens of Shakespearean theatre. It was a stylistic choice yeah, but it was of a style that was inherently going to make the eyes of the uncultured swine of a viewer like myself heavy. It’s not my fault years of school gave me a unconscious reaction to this kind of thing. Ragnarok, keeps these parts of the world preset, it just plays them to ridiculous extremes.

The “Tragedy of Loki” play at the beginning of the movie is the most theatre performance thing we get in the movie, and it’s amazing simply because it’s poking fun at itself. From this point on, we get great performance followed by great performance. Karl Urban, Cate Blanchett, Jeff Goldblum and Waitiki himself. All playing larger than life characters who just exude fun.

It’s so different than the movies that came before that it’s almost unrecognisable as being the same series. At the time of first viewing, I kind of felt Ragnarok was just aping Guardians of the Galaxy’s style, but looking back at it now the movie is something much different.

It might be the funniest movie in the MCU

As much as I love Guardians of the Galaxy, I think I might have laughed more at Ragnarok when watching this last time. After the dull affair that Dark World, I get the sense that Waitiki wanted to make Ragnarok a purely joyous experience, one that comes across in practically every scene in the movie.

This much more humanised version of Thor (both from a writing standpoint, and probably because he’s been spending a lot more time around humans) plays to Chris Hemsworth’s comedic strengths so incredibly well. This movie is the springboard that takes the most stagnated character of the franchise and sets him off on a new arc of self discovery that ends in Endgame, in which Thor realises the destiny being drummed into him, the inevitability of being king it not actually something he wants.

Thor was a character being crushed under the weight of responsibility, only for him to finally realise that, to be happy, he needed to shrug that responsibility from his shoulders and do something that makes him happy. Suddenly, I feel a deeper connection to the character than I did before. All brought about by the appearance of his elder sister and rightful heir to Asgard.

Cate Blanchett’s delightfully scenery chewing performance as Hela makes her a great prescience in the movie that she doesn’t really have much of an impact on. The bulk of Thor’s story takes place on Sakaar, and the cutbacks to Hela just serve as a fun reminder of how the movie will end. In between we get Tom Hiddleston smarming up a storm, Jeff Goldblum doing what Jeff Goldblum does, Waititi himself as Korg (a role I love a lot more in hindsight than my first viewing) and all the physical comedy coming from Thor and Hulk it’s amazing moment following by amazing moment. Not to mention you’ve got Sam Neil, Clancy Brown and Matt Damon in there too.

It’s an astounding ensemble, which is all the more impressive considering this franchise has already had Civil War, and has Endgame coming up.

The movie is non stop when it comes to comedy, action and drama. Weaving between the three and often doubling them up at the same time. There’s not a moment to catch your breath throughout this movie, it’s amazing them manage to fit in as much good character stuff in there as they do.

Putting a lid on Thor and Loki 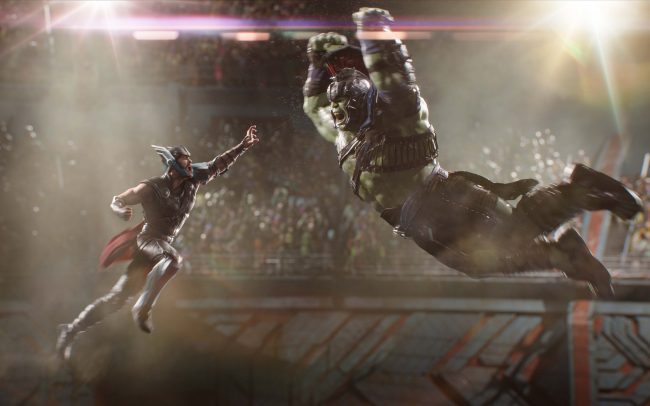 My favourite character relationship in this series continues to be that between Thor and Loki. The dynamic between the two has been one of the shining lights of the standalone movies. Their unique dynamic of a loving rivalry filled with betrayal was the best thing about Dark World, and seeing it reach a conclusion in Ragnarok is fantastic, even buried as it is amongst all the other great stuff happening around it.

Seeing Thor finally get wise to Loki’s nonsense makes for a great cathartic conclusion to their rivalry, one that finally seems to break down the barriers between them and allow Loki to finally accept Thor as his brother, his friend and his king. Maybe it’s because Odin is dead, maybe it’s before Asgard is gone, or maybe it’s because Thor finally shows an intelligence he has never had before that Loki does what he does.

Thor double crossing Loki and leaving him on Sakaar is a great moment, one that comes after Loki trying and failing to betray Thor. But Loki then showing up to save Thor and all of the people of Asgard with all the smarm and arrogance he can muster, through what is actually most likely a piece of dumb luck, is all the better when it happens.

What Taiki Waitiki did in Ragnarok totally reinvented the Thor franchise and changed it from the weakest aspect of the franchise into something so uniquely weird that I can’t imagine the franchise going froward now without him. Not only that, Ragnarok might just be one of the best individual movies of the entire MCU so far. So much so that Love and Thunder is the movie I’m looking forward to the most of the announced projects going froward.

Like James Gunn before him, Waitiki has made a part of the MCU synonymous with himself, so much so that he feels vital to its future. What he did with Thor Ragnarok was the best example of how Marvel Studios managed to utterly reinvent one of their characters to better suit both their creative direction and the wants and desires of the actor playing the lead role.

Had Ragnarok not happened the way it did, there was little chance of Chris Hemsworth staying on to continue playing Thor after both Downey Jr. and Evans both stepped down from the roles at the conclusion of Endgame. Yet it seems like we’re going to be getting a lot more Thor going forward, with a 4th movie in the series and a possible inclusion in Loki’s Disney + series.

It’s kind of fitting that, after the Norton Hulk movie way back at the start of this journey. Ragnarok manages to give us a total reinvention of not just Thor, but the Hulk as well.

2 thoughts on “MCU Rewatch: How Thor: Ragnarok revitalised the series”