This is part of an ongoing series, to see all of my reviews up until this one, look no further than this little link.

When it came to approaching Captain America: Civil War again, I did so with some amount of apprehension. For a long time, I regarded it as my favourite movie in the entire MCU. Coming back to it made me worry whether I’d still feel the same way about it after not seeing it for so long, and then if I’d be able to properly convey my feelings either way. Sat here, after having seen it again, I feel pretty confident in saying that Captain America: Civil War continues to be one of the very best movies in the entire Marvel Cinematic Universe.

But it’s not simply the best because of its all-star cast or its amazing action sequences. Rather, this movie tells a story that manages to set up a great, legitimate conflict between two of the most major characters in the franchise, and not only sticks with it all the way to the end, but allows it to become a major factor in the future of the franchise, changing the status quo completely in the build up to Thanos.

The entire point of conflict in this movie puts Tony Stark directly at odds with Steve Rogers, as the title would suggest. Heroes getting into misunderstandings and fighting one another is a time old tradition that’s as old as comic books themselves. However, the classic case of mistaken identity is the last thing that this movie is doing. The entire film is a building up of a genuine rift between the two, based on a serious issue that they find themselves on opposite sides of. And justifiably so.

Tony is a remarkably complex character as far as the MCU is concerned. He’s a train wreck of a person, and while he has continuously worked to better himself since his very first appearance, his very nature makes it so he can’t help but cause more problems as he fixes his previous mistakes. And that very thing is what kicks off this movie. The events of Ultron still ringing in Tony’s mind, and coming face to face with the mother of an innocent caught in the crossfire of him saving the world brings him crashing down to Earth.

While I’d say tony’s guilt is the real driving force behind this issue, publicly it’s the Sokovia Accords that spark this conflict alight. Based on something that was arguably Cap’s fault. But in reality, I feel like this is one more example of Tony’s doubt and lack of trust in himself. He’s doing it because he knows he needs something to keep himself in check.

Steve, on the other hand, is as remarkably simple as Tony is complicated. He says it himself: If he sees something he doesn’t agree with, he can’t sit by and let it slide. Something I feel Tony resents about Steve deep down, because he doesn’t have the strength of character to do the same thing and not feel guilty about it after the fact.

The entire conflict between them works so organically, reinforced in no small part thanks to Bucky’s factoring into events.

Playing both sides, and the audience

Throughout the movie, the conflict between Tony and Cap is an ideological one. They both have different approaches to their own brand of heroism, and a piece of paper has finally caused a rift between them. But for the most part, it never feels all that serious. Even the battle at the airport seems to have a lighthearted feel to it. That is until Rhodey gets hurt.

There’s almost a sense of sportsmanship to the whole thing, between Nat and Clint’s banter and the “no hard feelings” approach of Spider-Man and Scott Lang. Throughout the entire movie, it heavily leans in the direction of creating some greater threat for Steve and Tony to put their differences side and team up to take down. That particular threat being Zemo.

But that’s what might be my favourite thing about Civil War: It doesn’t end up where the audience thinks it’s going to end up. Both us and the characters get tricked, and for the first time (but not the last) in the MCU: the bad guy wins.

Zemo, the Winter Solider army and the entire connection to Hyrda are just one big fat red herring. All along, Zemo’s plan was to create a rift between Tony and Steve, and in that respect he utterly succeeds. Turning what everyone expected to be to be a final act team up into a genuine, life or death battle between the two. If only the trailers for the movie had not shown snippets from that final fight and let it be a genuine surprise in by the time the audience saw it for the first time.

It’s still the best twist in the franchise.

Doing it Better Than the Competition

This kind of move took some guts from Marvel Studio, and a confidence in their franchise that they could make this move. Many lesser movies in similar situations would not do the same. For a point of comparison, look no further than the most obvious competitor. DC’s Batman vs. Superman: Dawn of Justice came out just one month prior to Civil War and is just about as generic as this kind of story can be by the time it’s over.

While Batman’s issues with Superman are as good a source of conflict as the pair have ever had, what brings them together at the end is terribly lazy writing. Additionally, while the Winder Solider army is a big red herring, BvS plunges its arms into that easy out shoulder deep. Producing Doomsday as the perfect excuse for the pair to team up, and then kills Superman off for good measure so the pair don’t have to share awkward looks over the Justice League water cooler the next day.

Civil War ends with both of its heroes still at odds with one another, to the point that their rift ends up becoming an issue in the future movies. Like when Thanos attacks for example. You forgive Zemo for his convoluted, almost nonsensical actions throughout the movie because the action and the characters’ stories drive the movie forward, almost allowing him to blend into the background before he makes his grand reveal.

There really is no right or wrong in the end 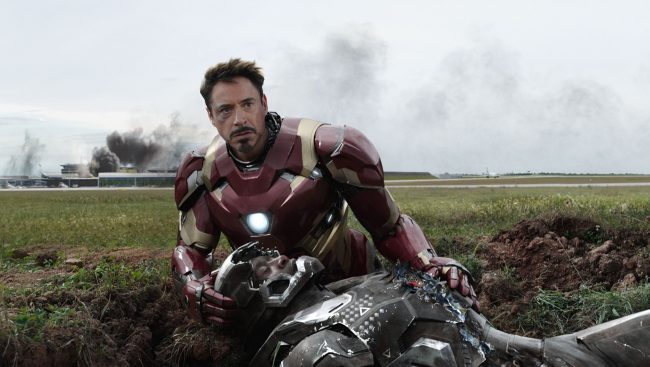 While I’d argue that Tony is painted more as the “bad guy” between the two, there is no clear person in the wrong throughout their conflict. The movie goes to pained lengths to allow a number of characters to give their two cents on the issue, knowingly or not.

It’s such a good way to flesh out this large cast, while also giving additional doubt to Tony’s uncertainty riddled mind. The introduction of Peter Parker and how his justifies himself using his powers to be Spider-Man is a great little conversation that services so many purposes within the movie.

It mirrors a conversation between Tony and Steve from earlier in the movie, making Tony realise how much Peter is like Steve, and thus how much potential he has to be the better “Iron Man” in the future. It also casts further apprehension into Tony’s mind, further fuelling the fire that will cause the misdirection come the movie’s end. And on top of all of that, it works as a replacement for Peter’s entire origin story, which we all know oh so painfully well.

Steve never really gets any shade or opportunity to doubt himself throughout the movie. Each and every time he does seem to come close to accepting it, he hears something during Peggy’s funeral or in conversations with Tony that work to double down on what Captain America is all about. In the end though, it’s his bleeding heart that causes the final rift between him and Tony.

The  conflict between Tony and Steve is just one fantastic element to this entire movie. Black Panther’s introduction and arc of growth throughout is subtle but still acts as a great jumping off point for his upcoming movie, showing a new standard for how the MCU could operate, introducing new characters in movies before they star in their own. Doing it here with both T’Challa and Spider-Man

Not to mention Paul Rudd steals pretty much every scene he’s in. People got excited for Black Panther and Spider-Man in the buildup to this movie, but I swear Ant-Man makes that airport battle sequence for me. Well except for that looks on Bucky’s face when a kid in red and blue spandex effortlessly catches his punch, it kills me every time. The movie is filled with amazing little character quirks and moments. It’s a testament to how much the franchise has grown and feels comfortable in its own skin that it’s able to trust it’s audience knows these characters by this point and allows them to have these wink and nod moments.

I can’t help but love this movie for all the reasons stated above and more. Civil War feels like a major pivot point that stands between the old MCU and new, young, fresh MCU that is to come. While it has nothing to do with Thanos and the upcoming Infinity War itself, it feels like the first real step in that direction and the ambition Marvel Studios will end up having with their movies.

For it’s action, it’s character moments, the complexity of their relationships and that amazing bait and switch at the ending, Civil War absolutely holds up and makes the Captain America trilogy of movies stand head and shoulders above the rest as one of the best collection of movies in the whole continuity.

The sheer confidence that this movie weaves so many different factors into, while also able to keep that strong character conflict between the two main characters at the core is amazing to me. There’s very little in here for me to criticise at the end of the day. We’re deep into the throws of the double edged sword that is needing the context of the many previous movies to fully appreciate what this one is doing, but can’t really use that as a criticism when this movie is doing something that no other movie franchise has done to this level.

Oh, I know. I absolutely do not buy that Peter Parker has never seen Empire Strikes Back, that’s about as unrealistic as him jumping straight on Bing when he’s trying to search something…

2 thoughts on “MCU Rewatch: Captain America: Civil War still might be the best movie in the franchise”