Merry Christmas and/or Happy Holidays to all. I am finally feeling a little more refreshed and coming to realise that I still have entries on this list I have not finished. So while I spend this festive day in a mixture of mild panic and alcoholism, enjoy this entry on my video games top ten list. One I’m kind of worried might be affected by how recently I have been playing it. But hey, I’ll do that revamp list in twelve months and make everything better.

To see the top ten lists for both my anime and video games of 2019, click this link.

Can I give a developer of the year award? Because Respawn are the winners, no question. With their legacy of the original Call of Duty: Modern Warfare behind them, Titanfall and now Apex Legends more recently, who the hell would have thought this studio, known for making amazing first person shooters. would go out and make something completely different and it turn out to be as good as this.

Star Wars Jedi: Fallen Order is a game that is part Metroidvania, part Souls-like all wrapped up in a Star Wars themed bow making it the perfect game I never knew I wanted. Unlike most Star Wars games of the past, the narrative takes a back seat to the gameplay, which is the main focus here.

The player controls Cal (Lightsaber) Kestis, as he forges his way through a number of worlds in search a Holocron, stashed by a Jedi Master prior to the purge of Order 66. Cal was a Padawan at the time of the order, thus his training was incomplete. After five years in hiding, Cal is forced out into the open as a Jedi Padawan and must fight to survive. 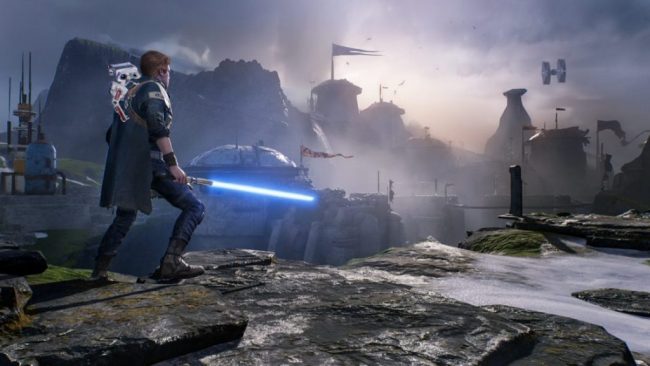 Combat in Fallen Order is very deliberate, based around a parry system that wears down an opponent’s stamina so that they are vulnerable to damage. This works in relation to Cal’s inexperience as a Jedi, as this is no the Jedi power fantasy that a game like Force Unleashed was.

Combat here can be unforgiving, as a moment’s lapse in concentration can cost you almost all of your health bar. It sounds like it’s very similar to the combat in Sekiro: Shadows Die Twice that came out earlier in the year. A game I have been kicking myself that I never got around to for pretty much the same amount of time.

When you’re not fighting, you’re navigating the environment using an array of normal abilities and force powers. It feels like some of the DNA of that bounty Hunter game that never came out found its way into Fallen Order, as part of the climbing sequences feel pretty Uncharted.

On top of the fantastic combat, the amazing world design and great score, the game becomes something of a perfect storm for me as a big Star Wars fan. I enjoy this franchise in pretty much all of its iterations and this feels like a great inclusion into the new, post Disney rebooted lore bible. While it, on it’s face, is a story I’ve read many times before; Jedi on the run between episodes III and IV.

Just off the top of my head, it reminds me a lot of the Coruscant Nights trilogy of novels of the pre-Disney era. There are quite a few parallels between Cal and Jax Pavan.

But it does the job and nails the feel of the world while nicely connecting it to the world and other parts of the franchise, through the inclusion of Saw Gerrera. I am still coming to terms with my feelings on Rise of Skywalker, as I wrote the bulk of this piece before seeing the movie. But in the end, I just adore Star Wars in all of its iterations, even the bad examples of it. So I’d say it need to be bore in mind that I come from that angle when seeing this game at this position on this list.

I’d love for Respawn to get the green light to make some kind of follow up to this game, or just make another Star Wars game in general. In fact, let Respawn make everything EA owns going forward. Jedi: Fallen Order is a great Star Wars property and a great video game on top of that, providing much for people who don’t even care about Star Wars, but have interested in the Soul-like deluge of games that have been coming out these past few years.