Last year, writing a top ten anime list was kind of a last minute affair. I’d really started getting back into anime for the first time in a decade and wanted to celebrate the shows I’d been watching. The problem was, unlike video games, which have a pretty well accepted release date, anime was a big more flexible in terms of assigning it a particular year.

This year, I feel like I’ve got a better plan in place. For the purposes of this top ten list, my very loose rule of thumb is that, to qualify the anime in question needs to have ended it’s run in 2019. I’m sure there will be an exception or two to this rule, but what are rule for but not to be broken.

Also, because I feel like this always needs to be stated before any of these lists: but this isn’t a list of anime I feel are the best made or critically great, rather it’s as the title suggests: they’re the shows that I enjoyed the most and meant the most to be personally for whatever reasons I give in the words that follow. 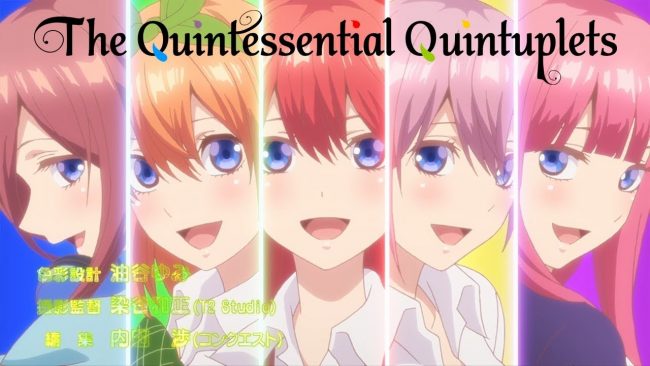 It’s the first entry of the year and I already feel like I’m cheating on my self imposed rules. Okay, so all cards on the table. I only went back and watched the anime for Quintessential Quintuples after the fact. And I felt it was fine to good, why 5-toubun no Hanayome actually gets a mention on my list is because of how much I loved the manga.

I’m not one to pit manga vs. anime. But this year I’ve read a lot of manga and there are certainly anime that execute the story much more impressively than the static image form, and there are manga with art so good that the anime never had a chance of comparing. It’s a case by case basis.

Amongst this deluge of manga, I found myself reading a lot of harem comedies. I think I lost a good month of my life just pouring through any I could find. Hence the article I wrote voicing my frustrations with how trope heavy and interchangeable so many of them are back in May. 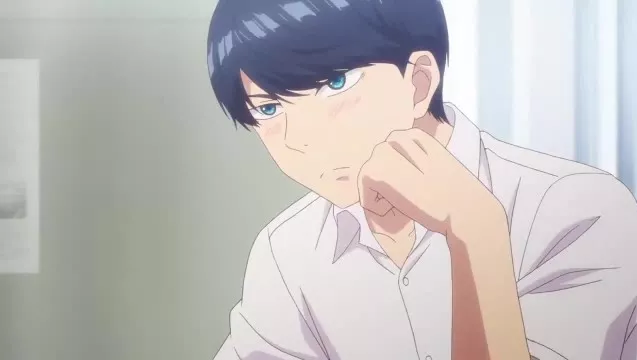 Quintessential Quintuples was unique amongst them though, in that despite having all of the trappings of the bog standard harem romance comedy, it took the time to flesh out its characters and break away from many of the expectations of the genre.

For one, the protagonist; Futaro Uesugi is not the standard hapless do-gooder male lead most of these shows have. In fact, he’s kind of a dick bag. From the start he’s an antisocial, manipulative and kind of unlikable presence. Of course, this is all a front for him being a good guy deep down. All the same though, he doesn’t tend to get flustered or embarrassed in the same way many other harem leads would, rather he seems exasperated by the girls for the most part.

While the dynamic between him and the girls is adversarial from the start as he finds himself having to tutor five spoilt and lazy identical sisters all of whom are dumb as a suck of hammers. Slowly, over time Uesugi wins over the girls, first into simply letting him tutor them, and then eventually into some of them falling for him. When the realise his good qualities deep down, and actually bring him out of his shell and make him a better person at the same time. 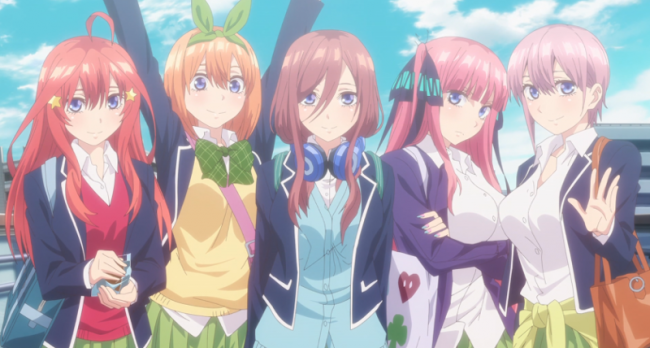 The series is paced really well. While it’s certainly a romance, the standard Ecchi misunderstandings are relatively light, and instead the show focus on the girls hopes, desires for the future and their fractured relationships with their father and one another. I’ll be honest, the events covered in the manga and those seen in the anime have run together a little, but for the most part I enjoy this show because it focuses on character development rather than a series of cheap teasing misunderstandings.

Uesugi himself seems hardly interested in romance with the girls, and instead being the best tutor and friend to them he can be as he starts to get to know them better. The manga itself seems to be winding up too, which is something else I really have to applaud it for, as so many manga of this genre just seem to endlessly spit their wheels and reuse the same skits over and over.

This is the only entry on the list where I’m praising the manga more than the anime, which is why I ended up putting it on the bottom of the list. If I were writing a manga list, this would certainly be near the top for the art, the story and the bucking of tiresome tropes (which is my issues and something I know many fans of the genre relish in).

From here on out It’s all anime and not me just wanting to talk about a series I liked rather than a mediocre series that makes up for the fact that I didn’t actually adore 10 shows this year.