This is an entry in an ongoing series in which I go back and relive the Marvel Cinematic Universe from the very beginning. I’m doing this after realising I have only seen most of these movies a single time since release. Click this link to go back and see the archive of the articles in the series so far.

I had been pretty critical of the first Thor when I rewatched it for this series. The dark fantasy aspects of the movie, while unique, stunk of a B-movie bomb just waiting to happen, it ended up getting dragged along with the wave of excitement for a honest to god Thor movie being made. Regardless of how it stands up to scrutiny years later. Despite the star studded cast and massive budget thrown at the movie. The early interpretation of Thor left a lot to be desired.

Thor, as a character, had gone through his entire arc within the length of just his first movie. Something I already spoke about in depth. He started off the arrogant prince, before spending a couple days as a “commoner” and learning the value of humility. It was an aggressive change in personality that felt  was most unearned.

For the sequel; The Dark World, we have a more mature Thor. His lopsided grin and effortless charm is harder to come by in the sequel, as he takes on a more stoic presence in the wake of Loki’s shenanigans. He spends half the movie lovesick and the other half mourning for his dead family members. As the movie’s title implies, this sequel carries a dark cloud over it throughout, preventing it from being anywhere near as fun or entertaining as it should have been. 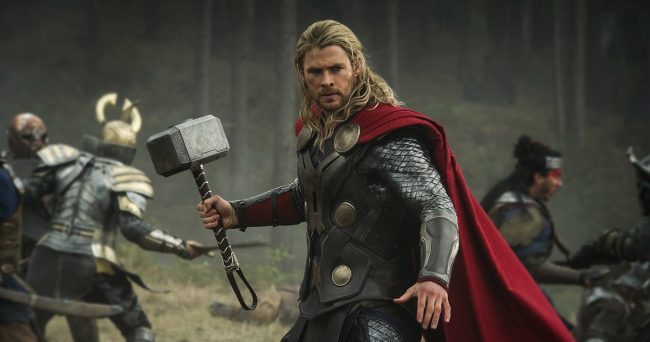 It certainly doesn’t help that all of the movie’s comedy is entrusted to both Stellan Skarsgård and Kat Dennings as Selvig and Darcy, whose style of cringe comedy does not land at all in this movie whatsoever. Putting all of their levity and “fun” onto a collection of barely consequential side characters, while leaving he main cast pretty joyless all but ruins the entertainment value of the movie by modern MCU standards. It’s salvaged only by a single character within the narrative.

The Dark World would have been an utter disaster of a movie in terms of its wishy washy D&D-style story, it’s utter lack of any charm or its lack of any story arc for its titular character. It’s one saving grace is Tom Hiddleston as Loki.

Loki is everything the rest of the movie is not. He’s dynamic, unpredictable, dangerously charming and it’s impossible to tear your eyes away from him whenever he’s on screen. Loki is still something of a phenomena at this point in the MCU, as the franchise still struggles to create another deep or interesting villain aside from him.

Malekith is amongst the worst (if not the worst) villain the MCU movies have ever produced. Evil for the sake of being evil, zero development or arc throughout the movie. He might as well be a faceless, antagonistic force rather than a named character for all the mark he leaves in the audience’s memory.

Loki, on the other hand, is the most engaging aspect of the entire movie. A complicated character to say the very least, the 20 minute period between Thor breaking him out of prison and him “dying” on the dark world is the best part of the movie. Their banter and subtle battle to one up one another in any way possible is fantastic.

Something I feel like they learned and built upon for Ragnarok.

I trust that I cannot trust him

Loki is the very definition of a Saturday morning cartoon villain. No matter how many times he fails, how many times he gets slammed around by a hulk or stabbed by an alien berserker, you can trust that he’ll show up again next week with that same toothy smile and start it all over again.

I mean, being actually murdered by Thanos still wasn’t enough for him to not get his own series on Disney Plus.

Like Tony Stark, Loki’s endless ability to both surprise and disappoint you makes him all the more human and all the more fascinating to watch on screen. Not a simple villain by any means, the death of his adoptive mother affected him enough to show he was not without a soul. And it was drive enough for him use revenge as a motivator to help his brother.

But not enough to stop him playing the long con, faking his own death (again) and taking control of the throne by removing and impersonating Odin. Which is a much stronger end to the movie than anything Thor could have carried by himself given his pretty passive role in the emotional arc of the story.

Outside of Loki’s presence, there is really little else to praise in this movie. It’s a very by the books dark fantasy epic, one that continues to feel out of tone and pace with the rest of the MCU as it has been thus far established.

The smart, snappy comedy of Iron Man and heart of Captain America is conspicuously absent from Thor and replaced with a dour costume drama approach to character archetypes. And the moments of levity they do attempt with the human characters on Earth fall flat when it’s all based on cringe and personal embarrassment.

Honestly, I was almost completely disengaged throughout most of this movie. Almost nothing that happens on screen is worth looking at, even the CGI is dark and messy to look at. It’s difficult to draw connections to the villains and their motivations, the heroes and their golden, shining city or the confusing final action sequence.

I’m not surprised that Chris Hemsworth was already tiring of the role during this movie. There is a real lack of joy in this movie, both in its events and from the actors that really exemplifies why the MCU is so attractive as a franchise going forward. The difference between this movie and Ragnarok is staggering and all I have to say is thank God’s of Asgard I am past this one.