As a rule, I am a real sucker for good story, lore and setting in my video games. More often than not, it’s something I value over the gameplay of the games themselves. I can forgive a lot of a game’s shortcomings if it create a exciting, vibrant world and tell a compelling story within it.

No matter how fantastic the storytelling though, nor how imaginative and full of style their setting is. Sometimes I just can’t overcome the hurdle that is actually sitting down and playing the game.

This list is born from that feeling. A collection of near impossible to jump hurdles that are stopping me from really enjoying the parts of games I adore. Be it their painstakingly crafted worlds or the gripping tale I am trying to invest myself in.

These are in no particular order either. It’s just the five biggest examples I could scrounge together:

This game exudes its own unique brand of weirdness. Set in a strange future world during which time Earth has been abandoned by humans, leaving androids in maid outfits in their stead to battle against alien controlled robots with hopes to reclaim the planet.

I love so much about this game. From the haunting beauty in the music and design of the future Earth, reclaimed by nature and populated by odd little machines. To the cute, but unnerving sights of machines, living in their own naive imitation of human society. All tied up with the melodramatic philosophic ramblings that only a Japanese game could deliver this earnestly.

I want to explore more of this world and absorb more of this setting. But my experience is being hampered at every turn by the act of having to actually play it. Fetch quests, escort missions and a combat style that feels completely brainless in it’s mashy approach all get in the way of the things about the game I want to interact with.

I just can’t connect with the dense menu and inventory system. I don’t to mash out two button combos against the same enemies over and over. I have a really similar problem trying to get into the Yakuza series.

As much as I like the idea of their stories and tone, when it comes to playing them and going through menus upon menus, my enthusiasm just drains. 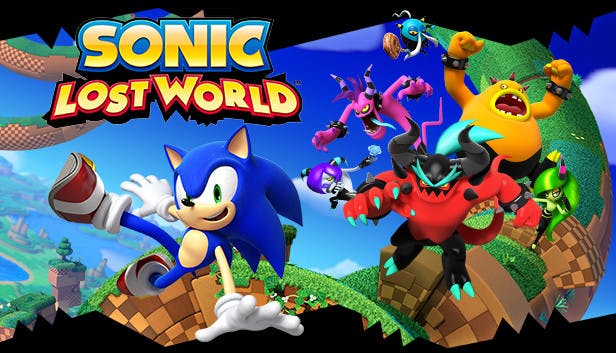 I’ve made peace with the Sonic the Hedgehog franchise being bad. I went into depth about it last year when both Sonic Mania and Sonic Forces came out within months of one another. So you could make the argument that any Sonic game could replace this one, but Lost World specifically is a game that pains me.

I love the style and design approach to this game. Of course, it’s hugely derivative of Super Mario Galaxy. But as a Sonic fan, you take what you can get. Set on a series of floating planetoids and weird, gravity defying worlds, the setting of Lost Worlds felt like something truly out of the ordinary.

While Sonic games don’t usually have a lot going for them, one thing they are fairly consistent about is their sense of style and identity. They create create worlds, accompanied by generally great soundtracks. And Lost Worlds is no different. Which makes it so much more painful that this is one of the worst playing Sonic games.

This game is slow. In a franchise that is generally invested in speed, that seems unforgivable. It’s not just slow though, it’s sluggish and unresponsive. For a game that wants to emulate Mario Galaxy; a game that controls amazingly, this is a pretty damning crime.

I didn’t even finish Lost Worlds in the end I got so fed up of wrestling with it. Which is a shame considering how think it still looks good. 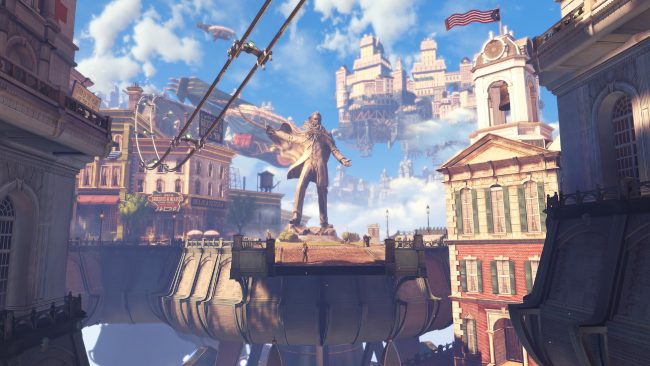 Rapture might be my favourite video game setting ever. It’s so strong that its character and personality eclipse the rest of the game, so much so that it casts a dark shadow over the rest of the franchise that followed it.

Like Rapture, Columbia is a unique, vibrant and well realised impossible city. One that is packed with history and things to discover if you want to. It’s not just a carbon copy of the game that came before, however there is still a lot of the same connective tissue and muscle present.

Where is falls down is that the nature of Columbia as a large and open skied city seemed like something the developers felt inclined to incorporate into combat. Focusing on using wide open areas and the hook to grind around the world.

The problem is, combat became a chore against the tougher enemies, as they shred through your health so quickly. Making it a necessity to keep moving at all times. Which sadly doesn’t gel all that well with the weapons and abilities that transition across to this game from the previous one.

Even the twist, connecting the game to the first towards the end, felt like it drew unwanted attention to the superior game. I do love Columbia as a setting, but it’s most interesting aspect also becomes its biggest detriment.

Dragon Ball games have a real inclination towards retelling the same story over and over again. It got stale for me by the time I hit the 3rd one, let alone the 300th. The upcoming Dragon Ball Z: Kakarot will most likely suffer this same indecency too. By simply retelling at least the first half of Z for the one billionth time.

It’s when this old series decides to throw something original at us that I get extra excited. The Xenoverse games certainly did do something different. Set hundreds of years after the events of the manga. Saiyans, Majin and benevolent members of Freeza’s race are are common as humans. And they’ve discovered the secrets of time travel apparently.

Xenoverse certainly does retread those old Dragon Ball stories, but they add a fun twist in that they incorporate various other villains in there to mess with the canonical timeline. Meaning the player-made avatar must go in and mess with time even more to rectify events to something close to how they should have been.

All wrapped around with some original characters telling their own original story. That coupled, with the toy box nature of the game. Xenoverse could be the perfect resource for any Dragon Ball fan to play in and create their own stories.

It’s just too bad the game plays like utter garbage. A third person action game with some very loose controls and fights that take a desperately swollen amount of time to complete. At the end game, you can be running down 45 minute timers just trying to chip away at the massive health bars of some enemies.

Xenoverse is the perfect example of a game with an amazing concept, and diabolical execution. It’s just not enjoyable to play. 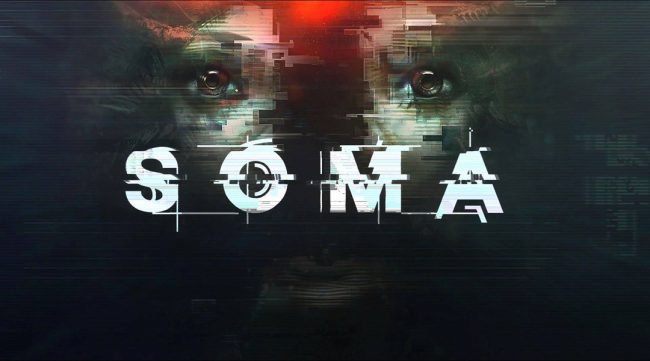 My quintessential example of this entire subject. Soma is a fascinating story. Beginning as a pretty standard science fiction/horror narrative, before transitioning into heady subject of transhumanism.

Not to spoil the game too much; but what seems to start out as an A.I. gone mad in a undersea research facility story, (that old chestnut) turns into one dealing with how far we might have to go to preserve humanity as a species.

It deals with ideas like preserving your sense of self when you mind is able to be copied and pasted into another body, and how an individual person copes with this. Or fails to cope with it in this case.

It’s such a cool thought experiment. Dealing with the fate of humanity and how we might exist beyond Earth and beyond our own bodies. All set in a super moody, super creepy underwater base. Because, as we’ve established, I like those.

It’s just too bad the gameplay segment of SOMA is simply not worth mentioning at all when talking about it. The “game” segments as far as I can call them that pretty much revolve around stealth segments, where you must avoid roaming monsters to get to the next part of the story.

It would be one thing if this part of the game was a tedious chore that got between you and the bits you wanted to play with. But to make things worse/better? the enemy A.I. stinks. After a while I realised that I could sprint past most enemies without them getting to me, thereby bypassing the videogamiest parts of this video game.

Soma is cool as hell, and tells a fascinating story. I almost feel like it would have been better suited as a walking simulator.