Cast you mind back to last summer, a time just before Netflix put out their Marvel series crossover; The Defenders. Viewers were still reeling after the release of Iron Fist, objectively Netflix’s weakest Marvel show to date. It was a series that seemed lacking in exciting fight choreography, despite it’s premise, and a protagonist you wanted to throttle.

I hesitate to flat out call the first season of Iron Fist bad, but it was surely a let down compared to the likes of Daredevil and Jessica Jones before it. Netflix had something of an uphill battle when making the second series to this shared universe show. Fast forward to today, as I’ve finished watching the second series of Iron fist, and Netflix have managed to redeem, not just the character, but the show as a whole in my eyes.

The Return of the way of the Iron Fist

After the pretty heady global conspiracy that surrounded the events of the first series, the followup scales things down in order to tell a more personal story. An incredibly personal story in fact. With The Hand defeated, this series takes a closer look at the backlash of Danny’s return to New York and how that event flipped around the lives of those closest to him.

The main antagonists of season 2 aren’t new characters, it’s Davos; Danny’s brother from Kun Lun, and Joy Meachum, both of which resent Danny for, how they see, Danny ruining their lives. The first half of the season focuses on the mystery of their plan, while the second half looks at the outcome of them actually pulling it off. 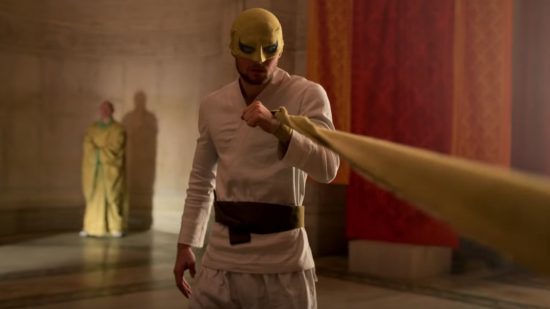 Otherwise, the series focuses on Danny’s increasingly erratic behaviour, Colleen’s search for her the truth behind her personal history and Ward’s personal quest to crawl from under the huge shadow left by his father and become a better person.

It also introduces the character of Mary Walker, also known as Typhoid Mary in the comics. In what has become traditional Netflix style, each of these character butt heads with one another as the series unfolds, their various goals making them uneasy allies one minute and enemies the next. All the time, doing a great job of making you kind of like the characters, but hating them at the same time.

It’s a Show about a bunch of Ass Holes

During a majority of this series, while I was invested in the events, I couldn’t really get behind a decent portion of the cast. Even the people who’re supposed to be our heroes. Pretty much every character is some variety of self centred ass hole. Even Danny; his constant do-good attitude paints him more as a self righteous dick on an ego trip than someone who is genuinely selfless.
Surprisingly, it’s a direction for the character I really liked. The first season felt a little blind to how obnoxious the character ended up coming across, this one leans into it.

The only character of the primary cast who doesn’t come across as a selfish dick bag, whose concern begins and ends with their own gratification, is Colleen. She seems to be the sole voice of reason amongst all the false smiles and people with deep emotional issues. Her friendship with Misty Knight was actually one of my favourite things about the early parts of the series. In a lot of ways, Colleen is the real hero of this series, and that feels all the more apparent by the time we get to the finale.

I also enjoyed Ward’s arc throughout this series. He was a standout for me in the first season, a sleazy business tycoon who couldn’t exist outside of his 70th story executive office. This second season has him sitting in AA meetings and struggling with his need to come across as the arrogant ass that only actually makes up 75% of his personality. Despite this, he doesn’t feel like a completely different character from the first series as the main bulk of his actions are in pursuit of repairing his relationship with his sister.

Speaking of which, Joy’s character from season 1 is the most contrasting. Joy has become incredibly embittered after the events of the previous series and seems to want to lash out at everyone from her past, particularly Danny.

Despite the fact that everyone seems to be such a raging dick bag of some variety, the series did something I didn’t expect and turned into a story of redemption. Not just for many of the characters in the show, but for the series itself.

I’m getting into season ending Spoilers from this point forward

As it turns out, Davos and Joy’s plan from the outset is to take the Iron Fist from Danny, transferring it to Davos. Using Mary Walker to do it. Davos wants the fist because he believes it was his birthright, stolen from him by Danny during their time together in Kun Lun. And Joy wants to help simply to hurt Danny by taking away the thing most important to him.

Once Danny loses the fist, he initially doubles down on his self righteous, ass hole behaviour. Rushing into situations without thinking and outright rejecting the offers of help from the likes of Misty and Colleen. Meanwhile, Davos uses the fist to begin a crusade against the Triad, going around and murdering dozens of people. The show halfheartedly tries to paint him some kind of sympathetic light, but it’s clear he’s gone off the deep end well before he claims the fist from Danny.

Danny’s own mania eventually reaches the point where he crosses a line with Colleen. After she swore never to teach again, he forces the issue and almost makes her retrain him after he badly damages his leg. He does this without batting an eye, knowing it could irreparably damage their relationship.

Ironically, it’s during this period that Colleen finally managed to break through to Danny, not as a lover, but as a martial arts teacher. She finally helps him get past his attitude and anger, allowing him to see with more clarity than he might have ever had before. It’s at this point that Danny makes an incredibly surprising choice.

He tells Colleen she should claim the Iron Fist from Davos, not him.

It was at this point that I realised that Netflix were going off the reservation with the source material, and I was fully on board. Throughout the series, Danny had never really felt worthy of the Iron Fist, not when you compare owning it to the flowery descriptors Danny surrounds the thing with. He always felt too weak of character to hold a thing suited to a more mature person.

Colleen is actually the perfect candidate amongst the main cast. I’m sure Danny will eventually reclaim the fist at some point in the future, but having him give up the power is the first step in a road to redemption for the character, not just within the fiction, but also for the show itself. Danny was probably mishandled in his first appearance, It feels like Netflix took this entire second series as an exercise in righting the ship and reinventing the character.

The series ends with the revelation that Colleen’s heritage comes from Kun Lun itself, and holding the Iron Fist is something she is more than worthy of doing. Leaving her to protect Chinatown alone, Danny and Ward begin travelling around the eastern continents, searching for the true history of the Iron Fist. Giving Danny a couple of chi channelling guns to make up for his lack of the Iron Fist in the final scenes.

Iron Fist’s first season felt like a series of conspiracy and industrial sabotage, headed by the protagonist the least equipped to handle it. It needed to deal with this larger threat that would find resolution in Defenders, but also had to introduce Iron Fist’s cast at the same time, something it failed to achieve in a satisfying fashion.

The second season’s decision to greatly reduce its focus to a more personal story has been the perfect shot in the arm. By focusing on these people and their many, many problems, it could work on undoing the ill will surrounding the initial series and establish the series’s strong enable cast for the future.

I came out of this series feeling real positive. Looking forward to seeing the characters going forward. I’d love to see a series of Danny and Ward’s swashbuckling adventures through Asia. Hopefully, some portion of the next season will show that before he inevitably makes his way back to New York.

Iron Fist’s second season was a dramatic improvement, and I am enjoying the direction all the series are taking in this post Defenders block. Breaking down alliances and leaving us in precarious status quos, it’s making me excited to see what a second series of Defenders could end up being.