Bad Boys 3 felt like one of those movies that was talked about over and over, but would never actually come to fruition. I was doubtful it’d ever happen right up until the actual trailer dropped. Even then though, I was apprehensive, as it seemed to be one more addition to the growing list of belated sequels.

Despite my staggering cynicism though, Bad Boys for Life ended up doing exactly what it needed to do and ended up being a movie that stands up utterly on its own merit and not just a movie that relies on its own past to guarantee its success.

It’s been 17 years since the last movie. A fact that is shocking as it is depressing to me personally. And in that regard, Bad Boys for Life does what many long running franchises do when they find themselves to be several decades old. Die Hard did it, Rocky did it, and now Bad Boys tackles the issue we all eventually face: getting old and feeling outdated.

Will Smith as Mike Lowrey and Martin Lawrence as Marcus Burnett are both in their 50s now and dealing with their age in very different ways. While Marcus has become a new Grandfather and seemingly relishes the idea of retiring and having a slower life, Mike is seemingly determined to go down in a fireball of glory.

It’s as close to the archetypal buddy cop movie (Lethal Weapon) as the franchise has ever been. And weirdly enough, I actually find myself agreeing with Marcus throughout most of this movie. In the early acts of the movie, Mike is gunned down in the street and left for dead. He doesn’t though, after his recovery, he is hell bent on getting his revenge on whoever it was who peppered him with bullets.

Marcus, on the other hand, is content to be thankful that his best friend survived the assault. Even weathering the emotional blackmail Mike lays on him in his quest for personal vengeance. Thus Mike is forced to accompany the newly formed Advanced Miami Metro Operations (AMMO) squad to track down the shooter. 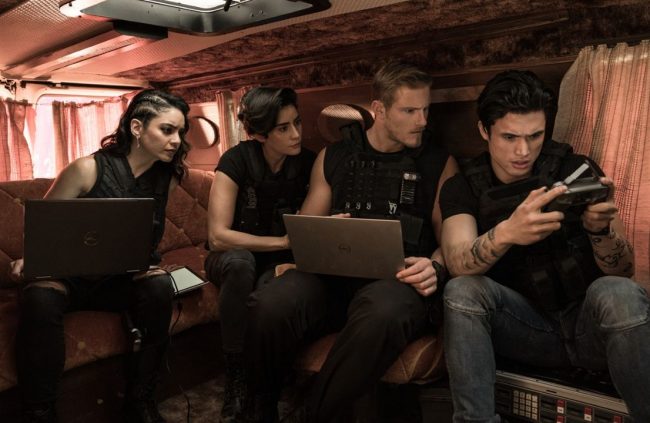 From here we get the bread and butter of what this movie is. Mike’s very old school, kicking in doors and getting answers approach bumping up against the younger, tech driven generation of cops. Who constantly show Mike up as being outdated. It’s funny really, because guys in their late 40s and early 50s are the backbone of the action blockbuster, but I get what the movie is doing and is hanging a candle on the issue for the sake of the movie’s core theme.

It’s a movie about midlife crisis and being willing to hand responsibility to the next generation. Which seems far deeper than I’d ever imagine the sequel to Bad Boys II to be able to muster, but there you go. I think Marcus is right in his contentment to enjoy retirement, especially considering the batshit antics him and Mike got up to in their decades as partners.

Mike, however, doesn’t seem to have the maturity to accept his age and wants to keep acting like the hot headed 20-something even when it keeps biting him in the ass over and over. Which makes his revenge bender seem all the more childish, despite a highly competent squad being already on the case. Mike is determined to be involved, which ends up probably hurting the investigation as much as it helps it.

It’s at the movie’s half way point where Mike comes to a personal revelation and finally starts to grow up. (spoilers follow by the way).

The guy who has been going around and murdering judges, lawyers and cops is actually revealed to be Mike’s son. The product of his first job as working deep cover within the Mexican cartel, he fell in love with the wife of the boss and came close to running away with her before eventually turning her and the entire gang in for their crimes. Upon learning he has a son, Mike has a newfound sense of responsibility thrust upon him and realises what a goober he has been.

Thus we find Mike getting an arc of growing maturity, despite running away from it earlier, coupled with Marcus who ends up rejoining Mike after the assassination of Captain Joey Pants (a character death that genuinely made me mad at the movie, rather than the villain). While I’m on the subject though, I need to point out what a fantastic foil to Will Smith Martin Lawrence is. Marcus is the perfect bumbling sidekick and he exudes Roger Murtaugh energy in this movie mote than he ever has before.

Like the previous movies, action ends with a huge raid on the villain’s stronghold where Mike opens up to Armando, played by Jacob Scipio, winning him back over from his mother’s evil influence. I can kind of see what Fast & the Furious fans are so mad about Jason Statham being accepted into the “family” after killing Han. I mean, he might be Mike’s son, but he killed Joey Pants, and that’s just unacceptable.

This movie felt destined to be a swan song for the franchise, but much to my shock it seems to be setting itself up for a whole new series, one that undoubtedly starts Will Smith and Jacob Scipio as the father son duo going out and getting involved in madcap action nonsense.

It’s a nice piece of closure that does make Mike grow up a little and shows he is finally willing to pass the torch onto someone else.

Bad Boys for Life was a lot more entertaining that I’d ever expected it to be. I loved seeing Will Smith in a movie I enjoyed again, and Martin Lawrence is the beating heart of the movie, it’s great to see him acting again after his health problems. Not only was this a great continuation of the franchise, but it’s also a very good movie in its own right, actually feeling more mature than the two that came before.